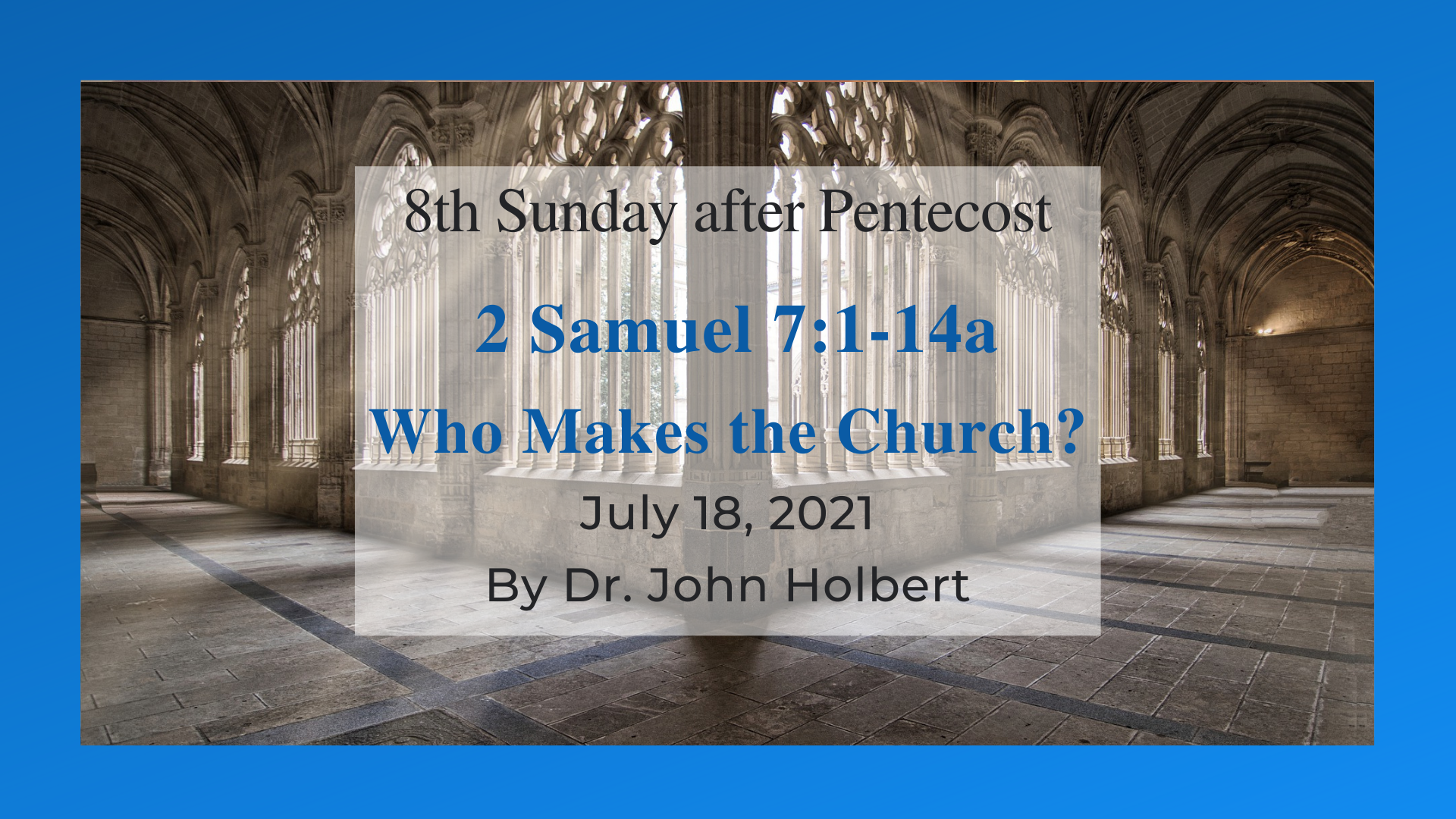 Who Makes the Church?

This passage in the midst of the brilliant and complex account of the rise of David to the throne of Israel always comes as something of a hortatory anticlimax. The influence of the school of Deuteronomy, which was to be prominent several centuries after the events described here, is obvious in this chapter. The language is formulaic, “preachy,” as David determines that it is time he built a “house of cedar” for YHWH, but YHWH reveals to Nathan that the king’s determination is both too facile and too poorly thought through. David may think YHWH is desperate for an established structure for right worship of YHWH, but YHWH will have none of that.

It seems quite clear that the text is dealing with the historical reality that it was David’s son, Solomon, who finally constructs the Jerusalem temple, and thus some rationale must be provided for why David did not in fact build it, even though it seemed like a thing he would surely do, cementing his religious bona fides in his newly acquired capitol city. The temple David proposes to raise will be a “house of cedar,” thus a matching building to his already constructed palace, itself made of “cedar wood,” an expensive import from Lebanon, the gift of King Hiram of Tyre (2 Sam.5:11). Obviously, David has his plans carefully designed to present both opulent palace and temple as living symbols of his greatness as king. This text suggests that there is a significant problem with David being the architect of the temple of YHWH.

In the book of 1 Chronicles 22:8, in an attempt to answer the question of why David did not build the temple, even though he is clearly the great hero of the Chronicler’s story, that 5th century BCE author declares that David’s life has been so ruled by the shedding of blood that YHWH denies such a violent figure the right to build the sacred temple. Only his son, “a man of peace” (Solomon’s name quite literally means “his (God’s) peace”) will be given that right to build. But here in Samuel the reason David may not build the temple for his God is a rather more traditional human one: YHWH tells Nathan to inform David that he is nothing less than presumptuous to think he, a mere mortal, has the right to build a sacred house of worship for a God who has been throughout Israel’s history conspicuously unhoused. Why should David be the one who determines that YHWH needs a building when YHWH up to this point has had no need whatever for such a thing? YHWH, through the prophet, offers David something potentially more valuable than the right to build a house for YHWH; YHWH will instead make David a “house” and his “kingdom will be established forever in the sight of YHWH” (2 Sam.7:16). This language of the perpetual kingdom of David will later be exploited by the early church to predict that Jesus, himself of the very line of this same David, will inaugurate a perpetual kingdom as the head of his church.

Who builds the church? The answer of this text is crystal clear: only God builds the church. Of course, ancient Israel, as well as modern Christians, know well that earthly forces must build buildings  consecrated to the worship of God, but in the end “unless God builds the church, the laborers labor in vain.” This too often sounds like a blithe cliche, but 2 Samuel 7 reinforces the idea that any church, all churches, must ultimately have God as the prime builder if that structure is to have any future as a place of worship and service. Too often, we act like David, rashly determining for ourselves just where and when a church may be needed for worship and service. Too seldom do we turn to God for help in deciding where is the best place and when is the right time for a church to be built. Ancient Israelite narrators described the building of the Jerusalem temple and then proceeded to warn Israelites through succeeding generations just how dangerous such buildings can become. Witness Jeremiah’s scathing 6th-century “temple sermon,” (Jer.7:2-15) where he excoriates the people who come to the temple and expect the blessings of YHWH for their overt displays of piety, while the poor, the widow, and the immigrants are neglected. Witness how Ezekiel describes the temple desecrated by would-be worshippers who instead of YHWH worship strange and mysterious creatures within the temple precincts (Ez.44:10ff). The temple may look like a place of YHWH worship, but it can easily devolve into a place of profane worship as well.

We modern worshippers must always be on our guard against using our temples for purposes which God had and never has had any such intentions. We moderns need our Nathans, too, to warn us against the abuse of even the most beautiful and beloved of our sanctuaries.