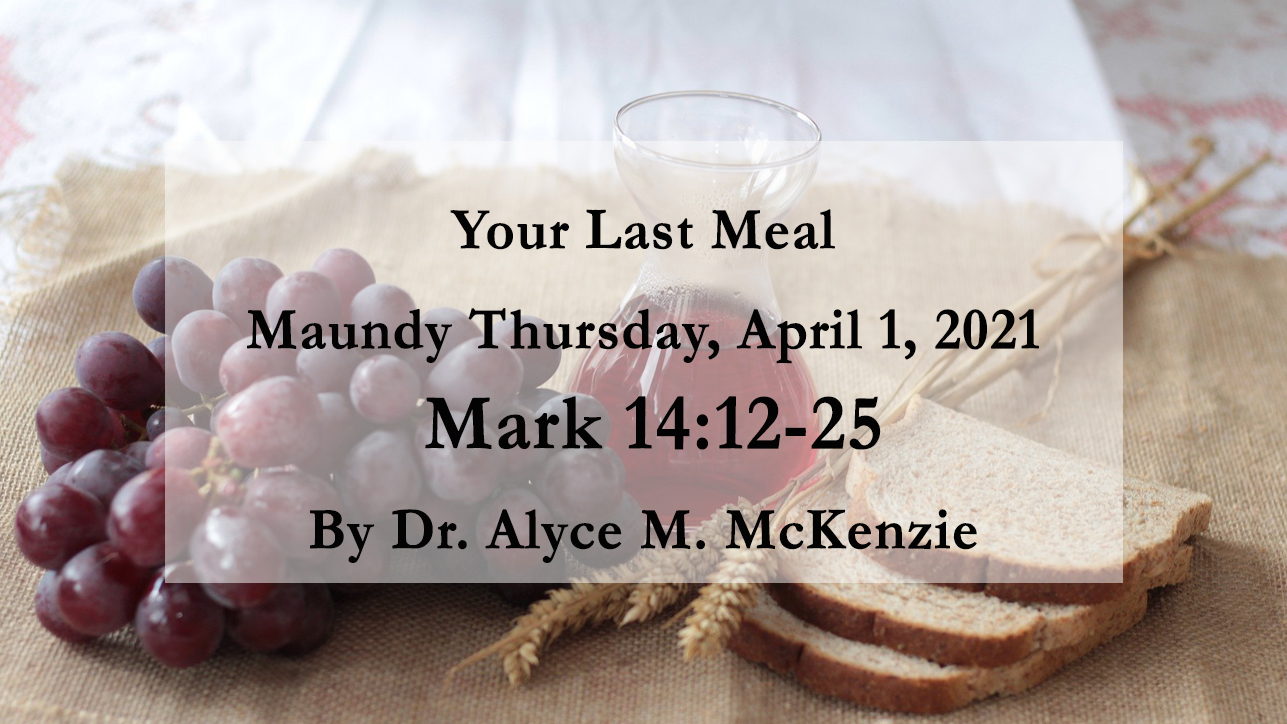 The meal Jesus hosted for his disciples on Maundy Thursday was a Passover Meal. Maundy is from the Latin mandatum (which means commandment) based on the fact that Jesus commanded us to love one another (John 13:34) and to continue the practice of the Lord’s Supper in Mark, Luke, and Matthew.

The Jews of Jesus’ day peering into the future knew that tough times were coming. They looked for a Messiah who would act as a new Moses to deliver them from bondage to the Romans as the first Moses had delivered them, bewildered, bleeding, and despairing from bondage to the Egyptians across the Red Sea.

As Christians we affirm that Jesus, the Son of God, the host of this Maundy Thursday meal delivers us from bondage to sin and death, bewilderment, hopelessness, and apathy. We can be certain of his presence amid an uncertain future.

Tonight marks the last meal of Jesus’ earthly life before his trial and crucifixion. And it marks the disciples’ last really good meal before the events that will ensue later tonight and tomorrow. I wonder how clearly they’ll remember it as their leader is betrayed, abused, and strung up on a cross? I’d love to seek out Simon Peter tomorrow, sit him down before he betrays Jesus, and ask him, “What do you remember about last night? At what point, Peter, did it dawn on you that this wasn’t Passover as usual? That Jesus, your server for the evening, was making substitutions in the menu?”

The Passover script tells the host to break the unleavened bread in half and say “this is the bread of affliction our fathers ate in the wilderness.” Instead, Jesus breaks it and says, “This is my body.”

When it came time, over the blessing of the third cup of wine, he was supposed to say, “This is the cup of redemption from bondage in Egypt,” he makes another substitution and says, “This is my blood of the new covenant poured out so that you may be freed from your bondage to sin.

Peter, at what point did it dawn on you that in Jesus’ last meal he was offering himself as the main course at a New Passover, proclaiming a new exodus, and a new covenant and entry into a new promised land?”

Tonight, we motley crew of 21st century folks join 12 spiritually hungry disciples  - reclined around a candlelit table in an Upper Room; We have gathered to join Jesus in his last meal before he is betrayed, beaten, and crucified.

In 1787 at the age of 84, John Wesley wrote a tract called “The Duty of Constant Communion,” a reissuing of something he had written 55 years earlier and believed even more than ever.

He gave several reasons why Christians should commune as often as possible.

Why would we neglect to partake of this meal that brings forgiveness of sins, and spiritual refreshment? One night, as Thomas Jefferson was sitting at his desk at the White House, he took a straight razor and cut out all the portions of the New Testament that he didn’t like - the miracles, the Resurrection, anything that indicated Jesus’ divinity. He didn’t have much use for the Eucharist. He wrote to a friend, “I have made a wee little book from the gospels which I call the ‘Philosophy of Jesus.' I made it by cutting the pages out of the book and arranging them on the pages of a blank book…”

To Jefferson, God was like a rich Aunt in Australia, benevolent but not very involved. And Jesus was to him a moral example and no more.

One of the passages he excised with his straight razor was from Luke 2 when Jesus was 6 weeks old and his parents brought him to the Temple to dedicate him to God.  A righteous old man named Simeon believed he would not see death until he had met the Messiah. The Spirit guided the old man into the Temple that day, and when he saw the baby Jesus, he took him in his arms and praised God, saying, “Master, now you are dismissing me in peace, for my eyes have seen your salvation!”

Years later, on Tuesday, July 4, 1826, the 50th anniversary of the Declaration of Independence, at age 83, Thomas Jefferson lay on his death bed at Monticello. There would be no more earthly food for him. He had had his last meal. There are many accounts of Jefferson’s last words, but the most inspiring among them is that, near the end, those around him saw his eyes fix on a point at the foot of his bed and heard him repeating the prayer of Simeon to the Messiah: “Master, now you are dismissing me in peace, for my eyes have seen your salvation.”

With all due respect to Thomas Jefferson, my money is on John Wesley when it comes to the Eucharist we celebrate this Maundy Thursday!

Let us fortify ourselves with this holy meal as we head into a challenging time. May the bread and wine strengthen our bodies as these tokens of the body and blood of Christ strengthen our souls. May we leave this place to stand by our savior in the challenges that face him in the next few days, as he has promised to stand by us in whatever lies ahead in our lives.