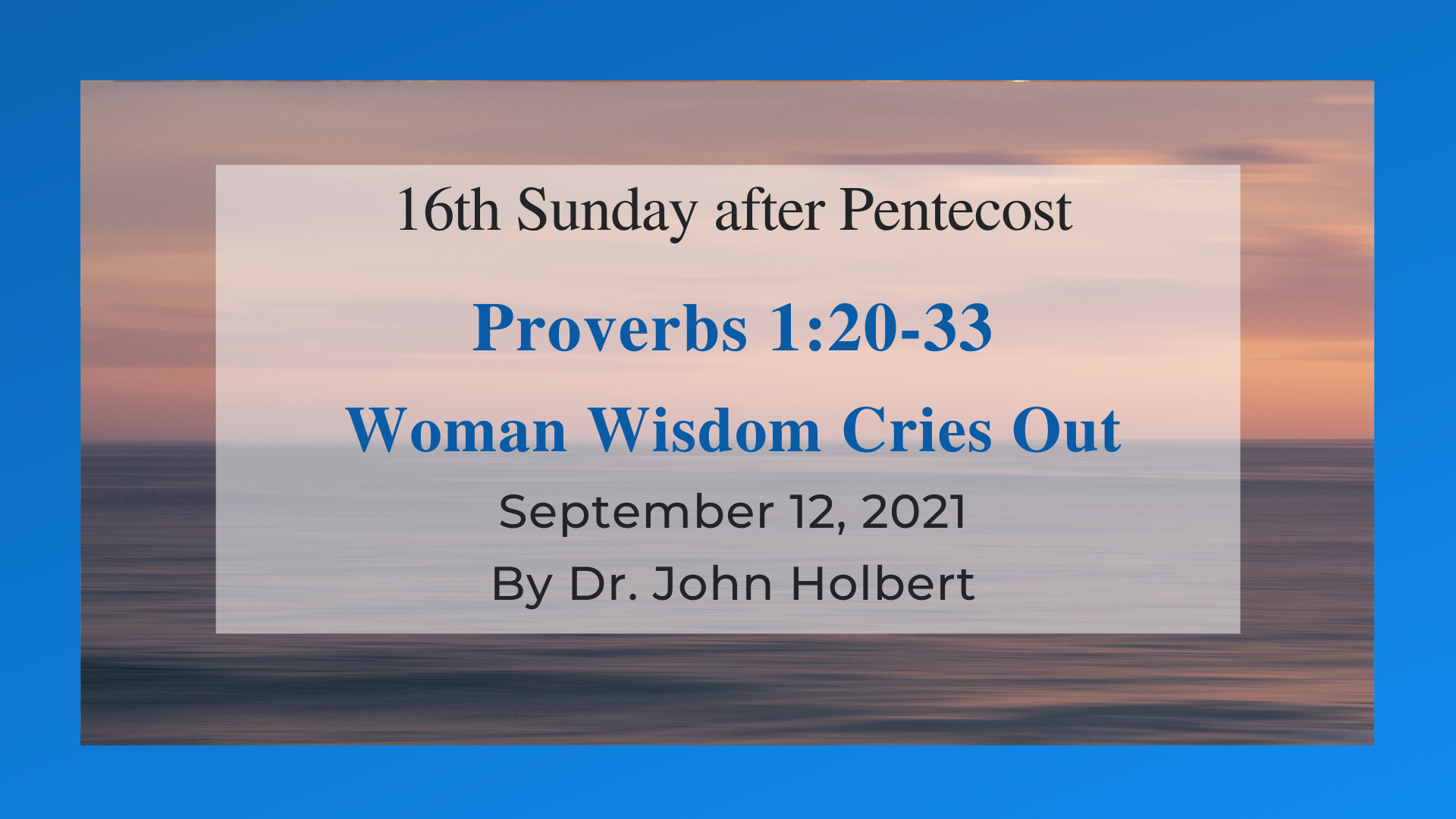 Last week’s text from Proverbs 22 gave us a look at what I called the “freeze-dried” half-truths of specific proverbs, sayings from the wisdom school of Israel and the ancient Near East that encapsulate insights gleaned from society. Such insights offer truths for living, but are hardly to be taken as universal realities, always to be followed to the letter. They are rather comments on human activity that can tease our minds into more careful reflection concerning our actions, thus helping us to bring a more engaged and thoughtful stance to our living. The dangers of making any of these one or two-line reflections universal demands may be seen in the terrible proverb, “If you spare the rod, you will spoil the child,” (Prov.13:24–NRSV “Those who spare the rod hate their children”) which led over the centuries to the notion that corporal punishment is always good for children, a monstrous idea that created terror in too many children and excessive brutality in too many adults.

Today’s text gives us something completely different. We find in Prov.1:20ff the intriguing and mysterious figure of Woman Wisdom, whose call to all is to embrace what she has to offer, namely true wisdom, the choice of which will lead inevitably to security and ease, and freedom from disaster (Prov.1:33). Before we return to the female figure of Wisdom, we need to address the basic question of precisely what wisdom is for these teachers of Israel. The answer in part at least may be discovered in the book’s very beginning.

“To learn wisdom and instruction,

To discern words of discernment,

To grasp the reproof of insight,

To give shrewdness to the simple,

To a lad cunning knowledge,

Let the wise one listen and increase learning,

And the discerning acquire skills

To understand proverbs and adages,

The words of the wise and their riddles.

The fear of YHWH is the beginning of knowledge;

There you have it; the key concepts for the truly wise person are: discernment, the acceptance of reproof (correction), the necessity of righteousness and justice linked directly with wisdom, the acquisition of cunning (the word not seen here as negative) knowledge, the desire to increase learning, leading to the ability to understand proverbs and sayings. All of those characteristics of a wise person are based on that bedrock notion that “fear of YHWH,” that is, holding YHWH in the center of one’s life, is “the beginning of (all) knowledge, while only “dolts” reject the necessary correction of wisdom. From those essential traits of wisdom follow all that appears in the Book of Proverbs, the central reason for the book’s existence.

We may boil all this talk down into something rather more simple and straightforward. The demand to offer “shrewdness to the simple” and “cunning knowledge to a lad,” is in the end intelligence of the most practical kind, a sharp alertness to potential deceptions and seductions, skills that will lead to a safe, satisfying, and ethical life. Anyone who refuses to understand that, and denies its significance for right behavior is nothing less than a fool and a dupe. The teachers of Israel thus follow older wisdom teachers of the Near East who have examined human behaviors and have concluded that society may be divided between the wise and the simple, the discerning and the dupe, the clever and the dolt. And for them, all true wisdom begins in the worship and awe of YHWH. In that way, right religion leads directly to right behavior; bad religion leads directly to foolishness and disaster.

Intriguingly, this wisdom is communicated to humanity by the beguiling person of Woman Wisdom. Proverbs 8 will describe in rich detail the origins of this figure and her role in the creation of everything and the ongoing importance of her life with YHWH, but here in Proverbs 1 she is seen as the announcer of the need for wisdom, the prophet of wisdom for all people. It has long been surmised that this feminine figure of a personified wisdom grew out of the simple fact that the noun “wisdom” is grammatically feminine, and because many other Near Eastern teachers speculated about a reality that stood at the center of all that existed (see the Egyptian ma’at, for example). In the same way, Israel’s wisdom teachers imagined a figure that both personified wisdom and taught it to those who would listen to her. Hence arose the memorable speculation concerning Woman Wisdom as provided in Proverb 8, as more than a concept but also an actual being, existing “beside God, like a master worker, daily God’s delight” (Prov.8:30). In Prov.1:20-33, this is the figure who calls all to embrace wisdom and warns those who will not about their terrible fate. Be wise, she shouts; do not remain or become a foolish dolt!

It is important to emphasize the interesting movement of thought represented by these wise teachers. Wisdom, they aver, begins in awe of YHWH, but is manifest in the actions that the Israelite prophets have already enjoined on the chosen people. Truly wise persons are those who do justice and love the love of YHWH, as Micah 6 commands. They also are purveyors of justice for the poor, advocates for the widow and orphan, defenders of the immigrants and foreigners in their midst. In short, the teachers of wisdom have learned their lessons well from the great prophets of the past: true wisdom has less to do with wiliness or trickery, but more to do with the acts of community justice. All truly wise persons may be seen in their acts of righteousness, especially for the community’s marginalized. Those who refuse to be wise, who deny the call of Woman Wisdom, are judged as fools and dolts and dupes. In our own century, we would do well to take seriously the call of Woman Wisdom, lest we find ourselves among the fools and dolts whose interest is only in themselves and their own success and power. As always, the truly wise are in the distinct minority now, just as I am sure they were in ancient Israel. Woman Wisdom, fortunately, is still crying out to us dolts to latch on to wisdom; it is never too late!