Weeping, After Attacking - Reflections on Jeremiah 8:18-9:1 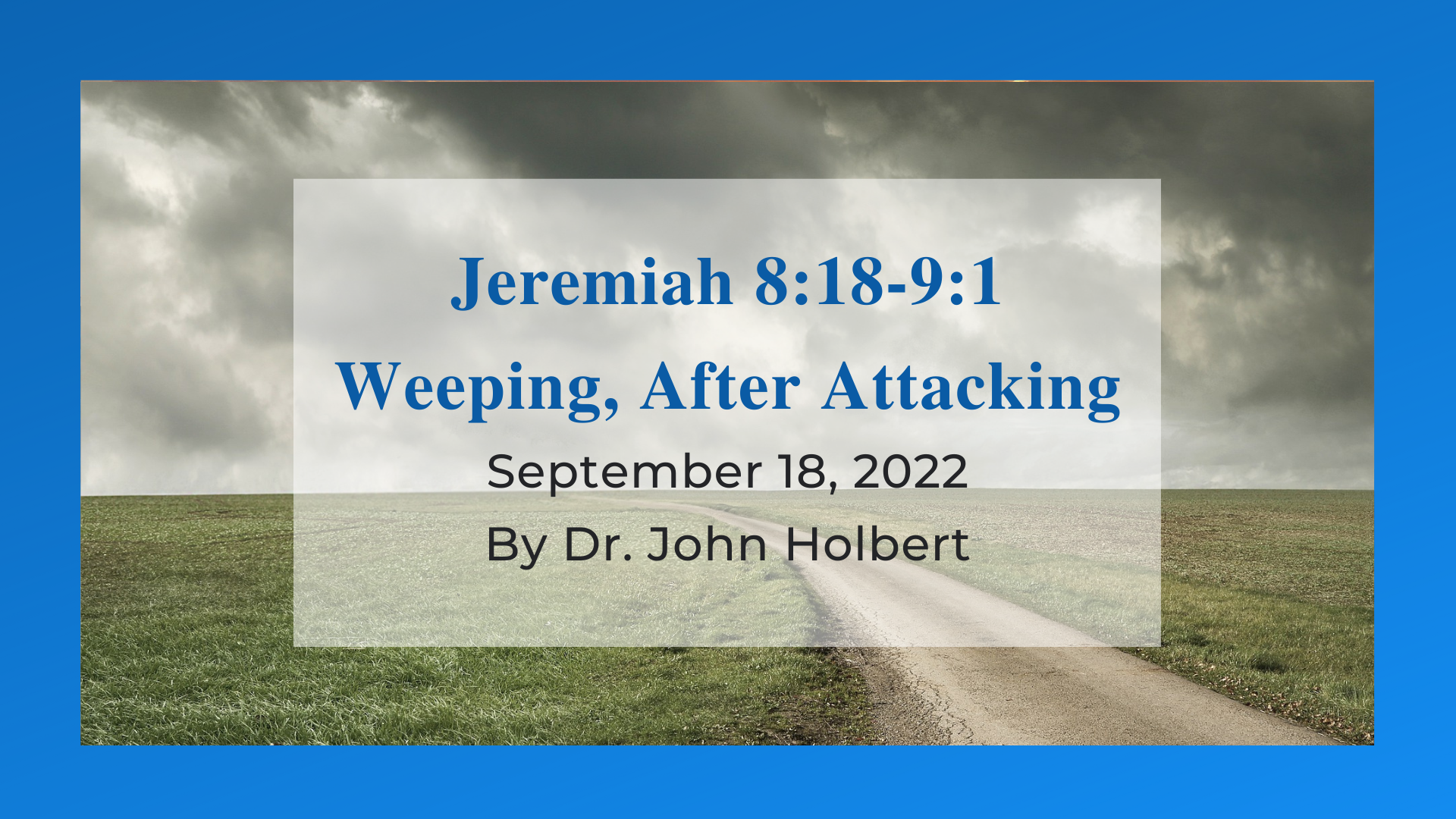 There surely is no more complex figure in the Hebrew Bible than the prophet Jeremiah. And there is no one we can know more about. During the long 52 chapters of his book, some spoken by the prophet, much written by his followers, and much written by later disciples, we receive a fuller portrayal of the life of prophecy than we get anywhere else. We hear Jeremiah thunder against those Judeans who care little for the poor in their midst but a great deal about their opulent worship practice. We hear attacks against the monarchs of the day, those chosen by YHWH to lead the people in religious revival, but who instead are content to play the games of power both within the nation and with other foreign lands. Jeremiah is an equal opportunity assailer: few escape his razor-like tongue, few emerge from his oracles unscathed.

And yet here he is in this anguished portrait of chapter 8. How the words leap from the page, filled with pain and sorrow for the very people he has just called to the most strict account! “Pleasure has fallen away while grief has come upon me; my heart is sick!” (Jer.8:18) We might imagine that the prophet has begun still another offensive against the sins of Judah, but this time that is not what we hear. “Watch! The sound of my poor people from near and far: ‘Is YHWH no longer in Zion or its king no more with her?’ (Why have they troubled me with their idols, with their foreign images?”) The phrase I have put into parentheses sounds the familiar chord of an attack on idolatry, but here the attack only follows the cry of anguish from a people who have somehow lost their God, who are terrified that God has left them. Jeremiah does not maintain the merciless assault against the idolaters so much as he conjures up sympathy for those who because of their idolatry and lack of justice-working have displaced their God from their midst.

And the cry of anguish continues with the memorable 8:20: “The harvest is over; the summer has ended, and we are not saved.” Another cycle of the seasons has been completed, but we feel no closer to YHWH than we did last year or the year before. What are we to do, cry the miserable Judeans? Jeremiah’s pity for them swings now in sharp and unforgettable language. “For the shattering of my poor people, I am shattered; I mourn, and horror has seized me” (Jer.8:21). Here is prophetic empathy on full display. No more can the prophet stand aside and hurl imprecations at his own people; now their shattering calls forth his shattering, their horrors bring out his own sense of horror for them.

Then he reaches for a well-known analogy of healing to seal his claim. “Is there no ointment in Gilead, no healer there? Why has the health of my poor people not been restored? (Jer.8:22). Gilead was in Jeremiah’s day a place of physicians and healing. Of course, this famous reference has led to the creation of a well-known African-American spiritual, “There is a balm in Gilead.” I well remember a very fine sermon, preached by my friend and long-time colleague, Dr. Zan Holmes, where he dramatically suggested that Jeremiah's question mark is stretched out and elongated by Jesus into an exclamation point. I would merely add that Jeremiah himself, however poignant his language in this pericope, later in his own prophecy straightens out that question mark, too. Here, however, the prophet is moved to cry out in his own anguish, “If only my head were a gush of water, my eyes a fountain of tears so that I could weep day and night for the slaughtered of my poor people” (Jer.9:1, though 8:23 in Hebrew).

Jeremiah, in the face of the terror suffered by his recalcitrant people, those same people that he has called into question, again and again, can no longer merely attack them; he must also suffer with them, must empathize with them. No true prophet can only bring doom and destruction; she must identify, stand in the place of those to whom she speaks. No pastor has any right to attack the sins of his people without recognizing his own sins at the same time. In that, we see the greatness of Jeremiah, a man called to bring judgment, but also a man called to bring compassion.