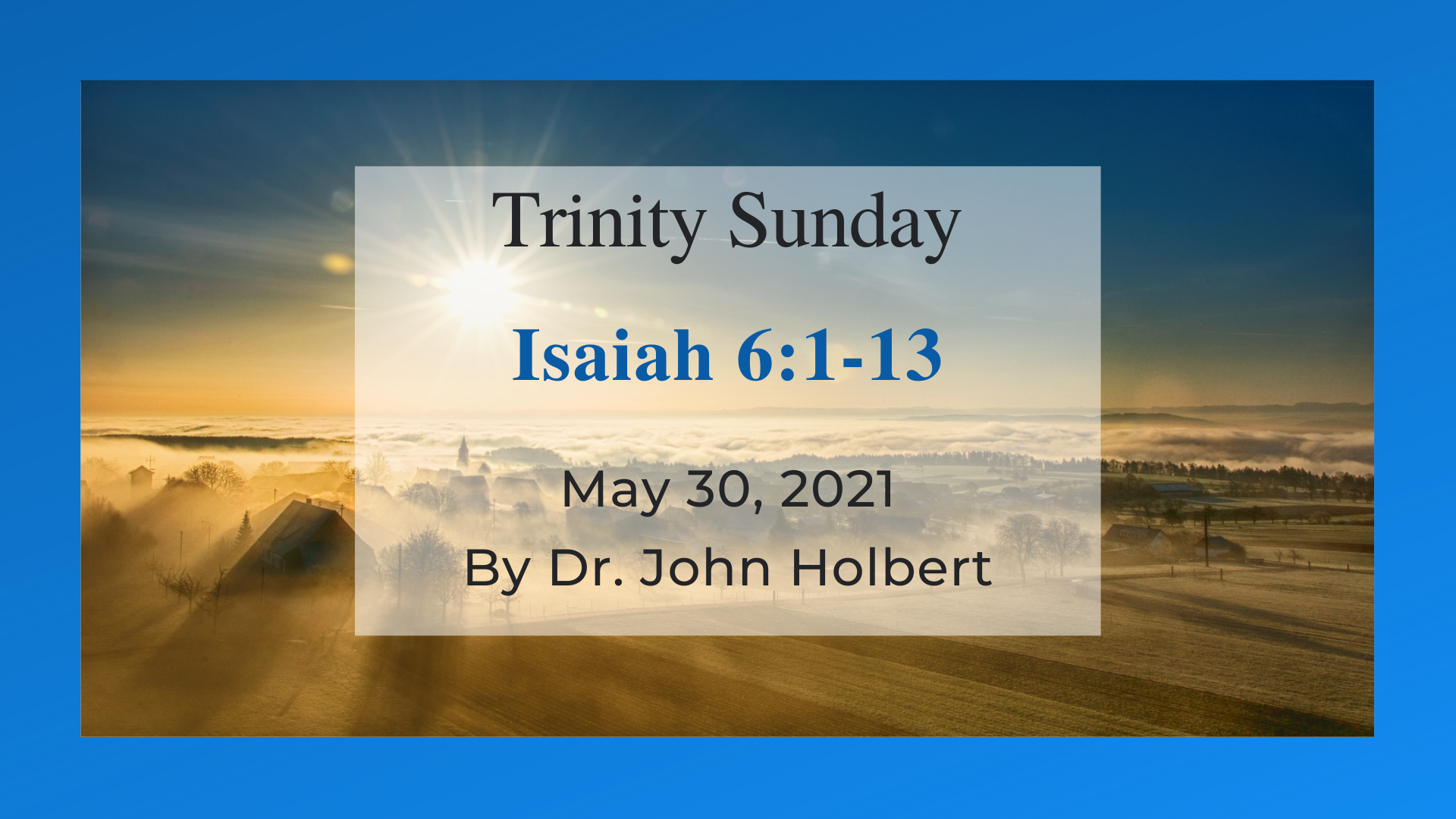 This justly famous call story of the prophet Isaiah has played an outsized role in the ongoing worship life of the Christian community, serving as nothing less than a template for worship services, both Catholic and Protestant. In addition, it has long been used as the section from the Hebrew Bible for Trinity Sunday, since the seraphim who are said to be flying around the figure of YHWH in the temple in Isaiah’s vision repeat their praise of YHWH as follows: “Holy, holy, holy is YHWH of the armies” (Is.6:3)! This is known among the liturgical elite as the treisagion, literally “three holies.” (We all know that when something is said in a foreign tongue in the study of theology, it is supposed to carry additional weight.) I presume that this thrice repeated praise is to remind us of the Trinity, that mysterious 3-part description of the Godhead that we celebrate this day each year. Because I have long found the doctrine of the Trinity a theological bridge too far for me, I would rather turn to another subject that arises from this rich text, namely the tough act of preaching.

Without doubt, 8th century BCE Isaiah is in this poetic reminiscence of his call to prophecy portraying for us and perhaps for himself just what YHWH has gotten him into in this divine call. It is a grand and a scary vision! Isaiah has gone to the temple, as he apparently regularly did, having some connection to the priestly caste in Judah, but this particular worship experience quickly deviates from the ordinary. He first claims, “I saw YHWH sitting on a throne” (Is.6:1), an astonishing announcement given how often in the Hebrew Bible we are warned that no one can see YHWH directly and expect to escape the experience alive. However, the prophet soon backtracks a bit, describing not YHWH’s physical features but rather YHWH’s attendants, the seraphim, six-winged serpents of fire (the name bears some relationship to fire in the language), whose wings cover their faces (to avoid seeing their God?), their feet (a regular biblical euphemism for their private parts), while the other wings allow flight. Their huge voices shout the three-pronged praise song as mentioned above, a thunderous din that causes “the thresholds to shake” and the entire house to fill with smoke. Isaiah’s response is horror: “Woe! I am lost, because I am of unclean lips, and am among those of unclean lips; besides I have seen the king, YHWH of the armies” (Is.6:4)! The prophet expects his end has come; not only is he the foulest of sinners, but seeing YHWH quite directly will surely seal his fate.

But then one of the fiery beasts flies down to him and touches his mouth with a hot coal, plucked from the burning altar of sacrifice. But the roasting coal is not designed to singe of kill the prophet, but rather to cleanse him, to prepare him for YHWH’s call. The call comes quickly. “Whom shall I send; who will go for us” (Is.6:8)? The plural that YHWH speaks is reminiscent of those famous plurals in Genesis.1:26, when Elohim begins the creation of the human beings, to be made in “our image” and “our likeness.” The early Christian theologians imaginatively decided that these plurals were in fact a trinitarian reference, but we can be certain that 8th century Isaiah had no thought of Trinity here. Perhaps to use plurals for YHWH is merely to emphasize the vast mystery of the Godhead rather than foreshadow the Son and the Spirit. To the call of YHWH, Isaiah quickly and proudly replies, “Here I am; send me.” Generations of willing followers have echoed the prophet in their responses to such a calling from on high, feeling and knowing that they had been sent on mission, and were ready and able to go as God directed them.

However, we must not stop at vs.8 of this vision, for the vision is far from over. That ubiquitous 1981 hymn by Dan Schutte, “Here I am, Lord,” sung in countless services of ordination over the past four decades, truncates the fuller meaning of Isaiah’s vision. In Is.6:9 YHWH continues to outline just what the prophet is being asked to do. “Say this to the people: ‘Keep listening, but never understand; keep looking, but never comprehend. Make their minds dull, close their ears, shut their eyes” (Is.6:9-10) We do not want them to understand too easily now, do we? We do not want them to grasp the full meaning of my desires for them too readily. YHWH says quite distinctly that Isaiah’s task of ministry is to make the way of God complex and the answer of the people difficult and slippery! Little wonder that the prophet sings a rather different tune after that: “How long, YHWH,” he shrieks? Good grief! Can’t I receive plaudits from my hearers and seers for clarity and passion in my preaching? Can they not rise up and call me blessed, the bringer of good news for their troubled souls? Hardly, replies YHWH. You will preach “until cities lie wasted, without inhabitants, where houses have no people, and the land is utterly desolate” (Is.6:11). Just what sort of call is that?

I would suggest that it is a crucial part of our call from God to preach. If we preach only what people want to hear, if we tickle their ears with pleasurable sounds of support and easy words of affirmation only, then our preaching is in vain and our words are empty. There has never been a generation that does not need the harder call of God, the call to take with the utmost seriousness the shortcomings of one’s people and one’s self. The world’s evils are always before us, and unless we name them and seek to address them—that homophobia, that racism, that planetary destructive impulse, and a host of others—we have not in reality heard the whole calling of God. The ministry of preaching has always been a tough act, and it has surely not gotten any easier in the 21st century church. On beyond Is.6:8 we all must go if we are hear in full the calling of our God.