The Virgin and the Syro-Ephraimitic War - Reflections on Isaiah 7:10-16 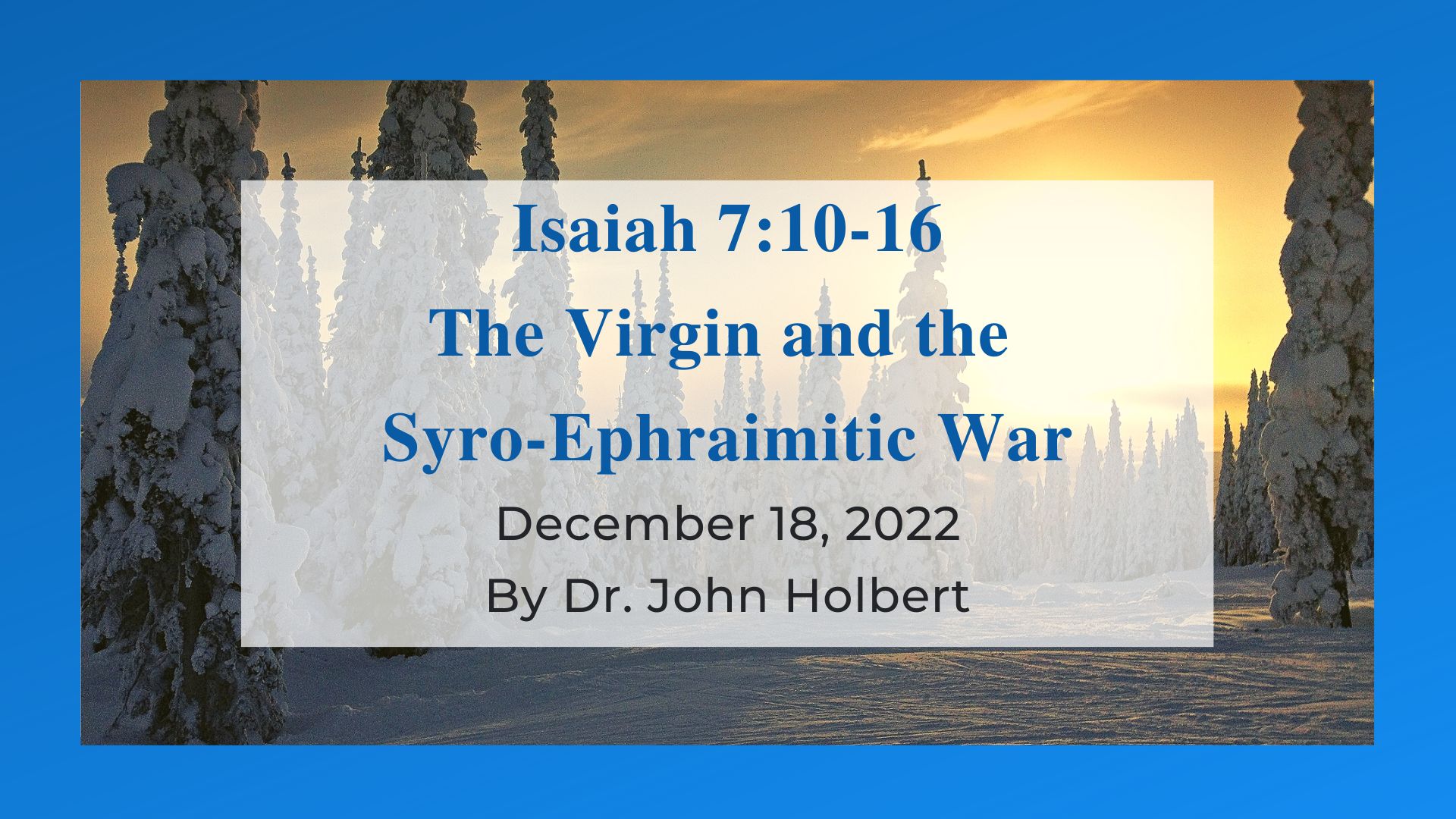 The Virgin and the Syro-Ephraimitic War

This last Sunday in Advent brings us to one of the more famous, indeed possibly the most infamous text, in all of scripture. For herein we find the origin of one of the dangerously pernicious doctrines in the history of Christianity—the so-called idea of the “virgin birth” of Jesus. The belief in the actual virgin birth of Jesus of Nazareth became over many years one of the pillars of the evangelical faith, found among the “five fundamentals” of Christian belief in the early part of the 20th century, a bedrock conviction of those who would preserve Christian belief against the “blasphemous liberalism” of men like Harry Emerson Fosdick and Clarence Darrow and other purveyors of “secular realism and humanism,” designed to undermine the “faith of our ancestors.” Indeed, these antagonistic positions continue to this day, though the overt struggle for exactly what Christain belief should consist of may not be quite as feverish as once it was.

There is considerable irony in the use of Is.7:14 to serve as the foundation of the doctrine of the virginal birth of Jesus. It is readily demonstrable that this ancient text says in fact nothing of a virgin birth at all. To be sure, Matthew’s Gospel quotes the verse as a proof text of the notion, but he is quoting not the Hebrew text of the prophet but the Greek translation of that text, the Septuagint, that served all gospel authors as the source of their employment of the Hebrew Bible. The problem lies in translation, as many such problems do.

The Hebrew text uses the word ‘almah, which means “young woman of marriageable age.” Hebrew has a word for “virgin,’ and this word is not it. However, when the Greek translators came to this Hebrew word, they translated it “parthenos,” a Greek word that can mean either “young woman” or “virgin.” Matthew heard “virgin,” and thus spawned a doctrinal fight that persisted into at least the 20th century, if not into our own century among very conservative Christian groups. Matthew describes the birth of Jesus as the fulfillment of prophecy, a tactic he often uses, claiming that Joseph, the fiance of the pregnant Mary, in a dream learns that he is to marry the girl anyway, though it is plain to him that he cannot be the father of her baby. This, says Matthew, demonstrates that Jesus’ birth is far from ordinary, is in fact the gift of the Holy Spirit of God. What else can Jesus’s birth be but virginal since Mary has never had sexual relations with any man? Hence, all subsequent followers of this Jesus are enjoined, at least by myriad of his disciples through the ages, to believe beyond doubt that Jesus’ birth was virginal.

It is of course well known now that any number of famous heroes were said to have been born of a virgin, beginning with Sargon of Akkad, over 4000 years ago, perhaps the first well-known king of antiquity. He was also said to have been saved from his enemies by floating on a river in a basket, a tale that carries echoes in the Bible’s book of Exodus in the story of Moses. A virgin birth was from ancient times another sign of the unique status of the one at the center of the story.

Isaiah, obviously, is not speaking about nor predicting the birth of Jesus centuries later. His historical reference is specific and easily recoverable. The context is the Syro-Ephraimitic war, a struggle pitting the kingdom of Judah, ruled by a young Ahaz against a coalition of Syria with its capital at Damascus (the same capital it still is today!) and Israel, euphemistically referred to as Ephraim. The goal of the war, fought in 734-732 BCE, was apparently to depose Ahaz from his throne and to force Judah to join King Rezin of Damascus and King Pekah of Israel against the rising power of Assyria. Assyria, however, came to the aid of Ahaz, relieving the pressure on the Judean king by attacking Syria, and capturing Damascus in 732. Ten years after these events, Assyria destroyed Israel’s capital, Samaria, and forced Judah to become its vassal.

The “young woman” about to give birth shall call him Immanuel, in Hebrew “God is with us” (Is.7:14). And the child will “eat curds and honey up to the time he knows how to reject evil and choose good,” says Isaiah; “the land before whose two kings you (Ahaz) are now in dread will be deserted” (Is.7:15-16). This appears to mean that before the child is old enough to make simple moral choices (age 3 or 4?), the lands of Israel and Syria will be no more. And in that way, the Syro-Ephraimitic war will end without Judah’s defeat or Assyria’s triumph. Ahaz, says Isaiah, should trust in his God, not in military alliances. However, the historical fact is that Assyria does conquer eventually all three nations, Syria, Israel, and Judah, though the destruction of the latter will be delayed until the arrival of the Babylonians over 100 years later.

What has all this to do with Advent and Christmas? Continuing our Advent theme of the implications of the birth of Jesus, wars, as Is.2 made plain, solve nothing in our world. The Syro-Ephraimitic war had little immediate effect on Judah, and delayed only for a time the complete destruction of Syria, Israel, and Judah. The birth of the strange child, a harbinger of God’s actions against Syria and Israel on behalf of Judah and Ahaz are nothing more than a brief respite from ongoing and near-continuous strife among and around the people of God. Ultimately, the so-called virginal child has no impact at all on the 8th century BCE Middle-Eastern world. Yet, we Christians continue to hope against our often dashed hopes that the birth of Jesus, whether virginal or not, will be different, ushering in days of peace and possibility for the entire world, a time when God really will be with us. In light of that hope, I wish you a most peaceful Christmas.