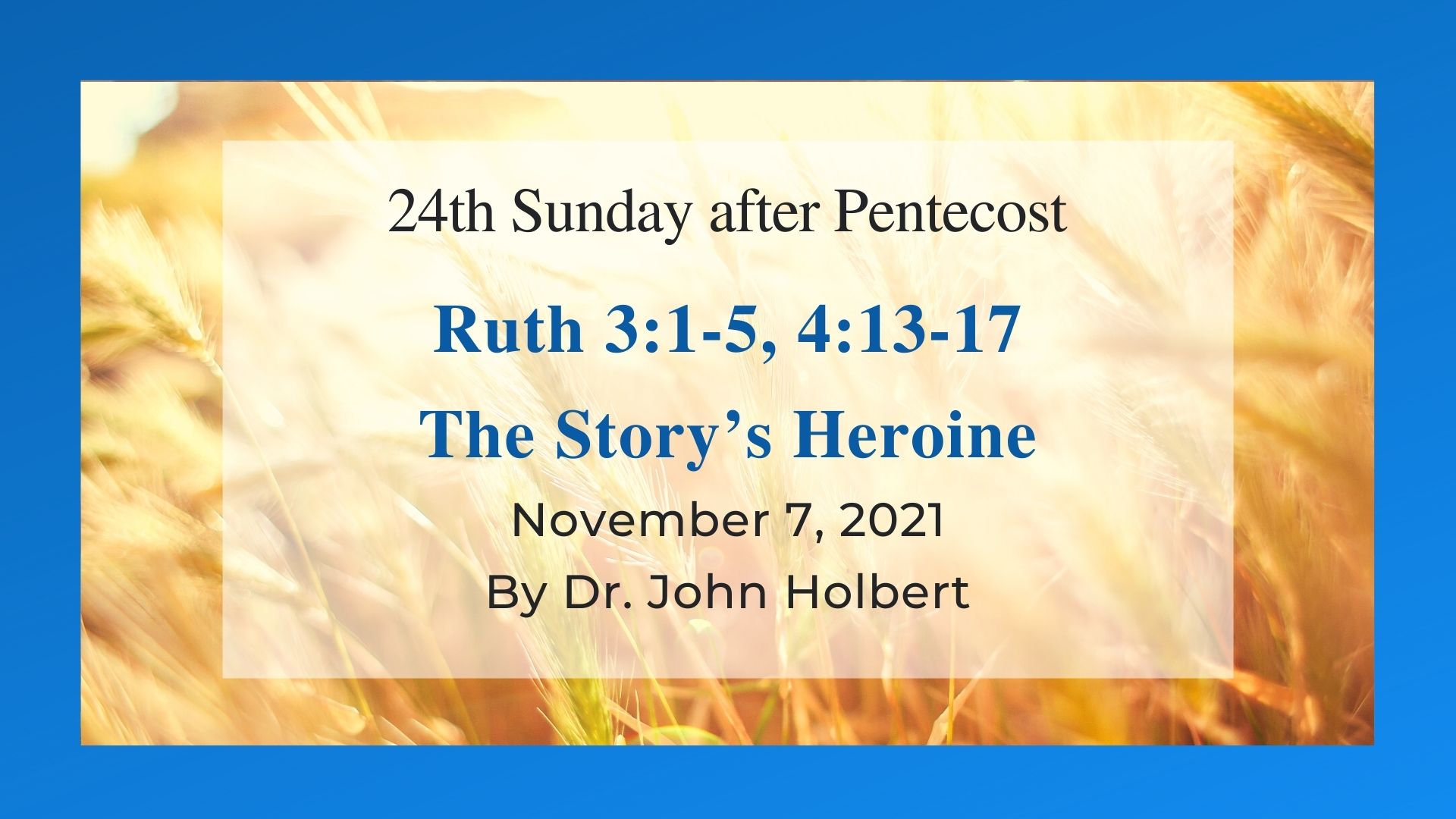 Last week, the end of chapter 1 of Ruth left us in a world of uncertainty, a sort of Saturday morning cliffhanger. Naomi and Ruth have returned to Bethlehem, but Naomi remains distraught and embittered, following her loss of husband and sons. She demands that the citizens of Bethlehem, her former home, no longer call her Naomi (“pleasant” in the language) but Mara (“bitter’). She has plainly not heard or accepted the astonishing speech that her daughter-in-law Ruth has spoken to her on the Bethlehem road. How can this tale move from lonely and tragic to a return to community and hope? The answer is to be found in the actions of Ruth.

She first announces to Naomi that she is about to go “glean” in a field of someone “with whom she might find favor” (Ruth 2:2). This is risky indeed! She is a single foreign woman, subject to the whims and potential assaults and abuse of field hands, all anxious to catch the eye of the owner of field with the hope that he might notice their work and bestow special favors on them. Gleaning makes the action doubly dangerous. The act is something like an Israelite welfare system. After the field owner’s pickers have finished with their work, and have usually left grain in the rows and have not stacked it among the bundles, the marginalized members of society—orphans, widows, foreigners, strangers—may descend on the field and pick up, as quickly and as well as they can, whatever has been left over. It is a hardscrabble way to survive, and certainly involved a mad scramble for grain among many desperate people. Ruth is willing to risk all these dangers and goes to a field that “happens” to belong to Boaz, a well-known and well-respected man in the city who also happens to be a relative of the despondent Naomi, despite her insistence on the Bethlehem road that she had no relatives left. We now can see the lie for what it was: she had no interest in being saddled with any foreign daughters-in-law.

Boaz quickly and pointedly notices Ruth, and asks, in a decided patriarchal voice, “whose woman is that,” assuming as any man of the time would that she must have some connection to a man (Ruth 2:5). “She is the Moabite who came back with Naomi, and has worked steadily since she entered the field as one of the gleaners,” replies a servant. Boaz wastes no time calling Ruth to join him for lunch, an unimaginable social climb from unknown gleaner to the notice and favor of the field owner. Of course, it turns out that Boaz has already heard about Ruth’s enormous sacrifice, leaving home and family to come to this foreign Israel. After lunch, Ruth returns to the sweaty work of gleaning, but after she has left Boaz’ earshot, he demands that his hired men not bother Ruth at all, and even pull grain out of their carefully stacked bundles, ensuring that she will have a huge glean for the day. And so she does, taking an enormous amount of grain home to Naomi, whose astonishment of the size of what she has gleaned is equally matched by the reality that the source of the grain is from Boaz’ field, a close relative of hers! Surely, a lightbulb turns on in Naomi’s and our heads; Boaz would make just the partner for Ruth, and all of our problems would be solved!

Unfortunately for the two women, Boaz does nothing to follow up on his solicitation for Ruth. He sends no emails, makes no phone calls, offers no flowers. So, Naomi is forced to act. She asks Ruth to put on her very best dress and perhaps add a touch of face paint and perfume, head down to the threshing floor where she will find Boaz protecting this year’s harvest, lie down next to the man so that he Can tell her want to do (Ruth 3:1-4). Though Ruth says she will do what Naomi asks, in the end, she does not; she takes full control of the potentially compromising situation.

She dresses up, goes to the threshing floor, and after discerning where Boaz is, she does lie down next to him, “uncovering his feet” (Ruth 3:7). “Feet” is often a euphemism for genitals in Hebrew, so you may allow your imagination to run as you depict the scene in your mind. A startled Boaz wakes up, finds Ruth at his feet, and asks “who are you?” “I am Ruth,” she replies and adds “Spread your cloak over your companion because you are next of kin” (Ruth 3:9). In other words, Boaz, your responsibility is to marry me! And so he finally does, after a small contretemps with still another relative of Naomi’s (my, she did have some family amnesia on that road!) is convinced not to take Ruth as wife, thereby endangering his own line of succession.

So Ruth and Boaz marry and are soon blessed with a son whom we are told is the grandfather of King David (Ruth 4:17). But as I said last week, that is hardly the central point of this tale. That point is rather found at Ruth 4:15 when the women of the community (all men have disappeared from this final scene) say to Naomi: “He (the child) will be for you a restorer of life and a nourisher of your old age (the famine has indeed ended!), because your daughter-in-law who loves you, who is more to you than seven sons, has borne him.” That is the only time that the word “love” is used in the story. All that Ruth has done, from her great speech on the Bethlehem road to her risk in a foreign field to her greater risk on the threshing floor at midnight, has been solely because she has loved Naomi. And the fact that she is “more than seven Israelite sons,” a patriarchal mouthful, seals her absolute uniqueness. It is this amazing devotion to her mother-in-law that makes Ruth one of the Bible’s great models for the love of YHWH for the people. In this tale, it seems, God is a Moabite widow. How about that?