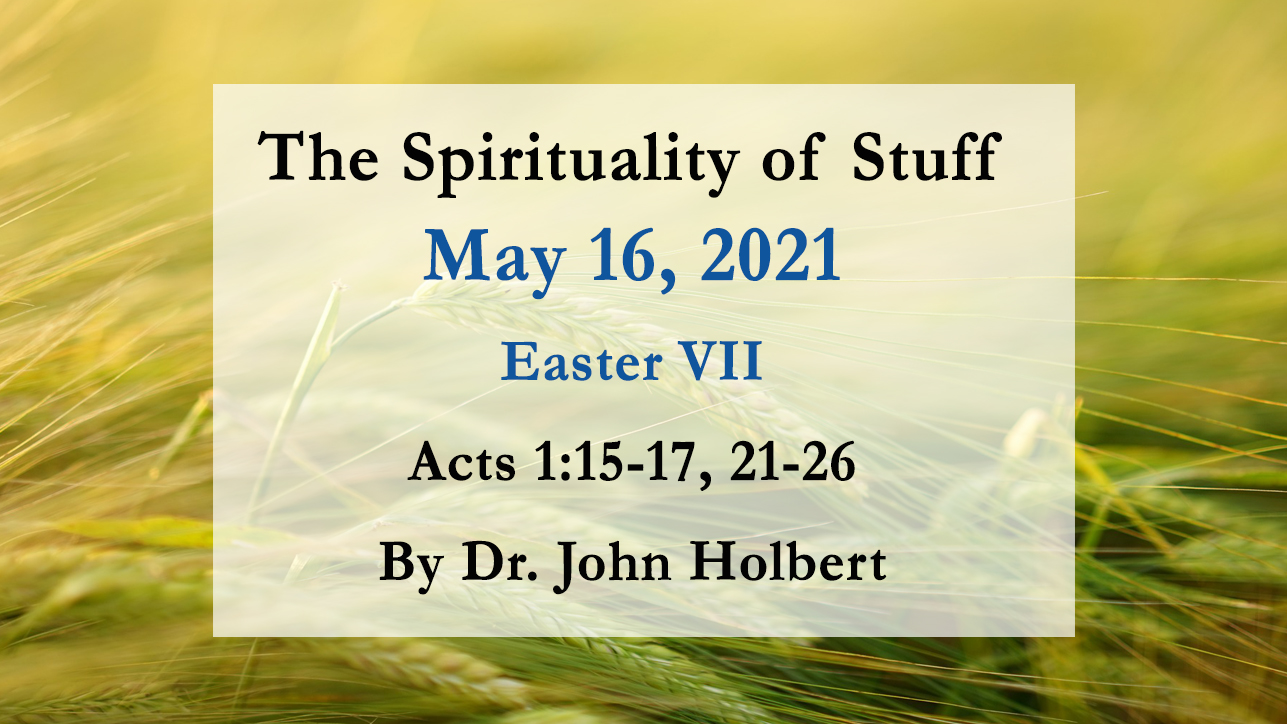 The Spirituality of Stuff

There is something decidedly odd about the ordering of the material in the early chapters of Acts. The dramatic ascension of Jesus in the sight of the apostles is immediately followed by a list of those apostles with the very obvious omission of the name Judas (Acts 1:13-14). And that list, somewhat anticlimactic after the rather hilarious ogling of the apostles watching the departing master, necessitating an angelic rebuke that they should be about the business of actually being Jesus’s disciples rather than wistfully wondering about his return (Acts 1:11), is pointedly followed by a lengthy focus on both the failure of Judas and the desperate need for his replacement to be chosen without delay. Clearly, Luke has important business in mind by his shaping of the material, and we might conclude that the business has to do with one of Luke’s central concerns: the relationship between individual property and the unity of the new beloved community about to be formed by the gift of the Holy Spirit (Acts 2).

Given the story of the ascension of Jesus in the sight of his closest followers, the reader might well expect that the great story of the Pentecost experience would ensue immediately. After all, it is that story that will summarize and energize the early Christian community, a story that has been recounted and celebrated by Christian gatherings ever since it was first recorded in Luke’s book. Instead, we get a detailed account of the destruction of the circle of the innermost community of Jesus’s disciples by the abhorrent actions of one of their members, one chosen and active in the ministry as they all were, but who “went to his own place” at the end, leaving them all for his own interests. For Luke, Judas’ betrayal was far more than an individual failure, the reckless and greedy actions of one man. Judas’ famous rejection and betrayal of Jesus shattered the crucial symbolic integrity of the group of 12, the necessary biblical number needed to constitute the beginning authority of the restored people of God. Without 12, according to Luke, there can finally be no acceptable and appropriate grouping to provide the foundation for the new community of Jesus Christ. Like the well-known 12 tribes of Israel, that grouping that formed the basis for the chosen nation of God, so there simply must be 12 to suggest symbolically that the new community has its roots in the old.

Hence, Judas must be replaced and soon. His brazen denial of Jesus and the ministry he has begun is quite different from the denial that Peter, the leader of the disciples, expressed. That denial was weakness, a weakness that Jesus had foretold; in addition, Jesus had promised a return to strengthen their weakness (Luke 22:32), a promise fulfilled after the resurrection. Judas’ sin was far more than weakness, though that surely played a role. Judas perpetrated an apostasy from his calling, and thus constituted nothing less than a threat to the entire plan of God concerning the beloved community of Jesus. Before the Spirit may be poured out on this new community, there must be the correct number of followers to announce that the Christian community was both new and a mirror of what God had done in the past with Israel.

Luke shapes the scene of the choice of a replacement for Judas with literary skill. He introduces the scene with a stark reminder of the horrifying acts of Judas, with a special emphasis on the money he received for becoming the “guide for those arresting Jesus” (Acts 1:16). Luke makes it quite clear what Judas did with the cash he got for the deed of betrayal: “This man bought a field from the payment for this wicked deed” (Acts 1:18). Luke then recounts the gruesome end of Judas on that same field by telling us that he “fell headlong,” perhaps from a great height, whereupon “he burst open in the middle and all his bowels spilled out” (Acts 1:18). There is no need to attempt to harmonize this grisly scene with Matthew’s portrayal of Judas’s suicide by hanging (Matt.27:5). The stories are decidedly different because each writer has quite different concerns in their unique telling. The one place where Matthew and Luke agree is the name of the place of Judas’ death: it is Hakeldama, Aramaic for “field of blood,” a place that one may visit “to this day,” according to Matthew.

But Luke offers sharp detail to underscore the significance and horror of the story. “It is necessary,” he says, Luke’s signal for biblical quotation to demonstrate that all had to proceed as it did, given the general predictive nature of passages from the Hebrew Bible, as Luke knew and understood them. Quoting the Greek translation of the Psalms (LXX), Luke gives us Ps.68:26: “Let his dwelling place become deserted and let there be no one dwelling in it,” a reference, according to Luke, to Judas’s demise and disappearance from his purchased farm. He adds a brief reference to Ps.109:8, also in the Greek, saying, “let another take his office.” The Hebrew of this verse says quite differently “may another seize his goods,” but the LXX version is far better for Luke’s purposes because it leads directly to the scene of the choice of Judas’ replacement.

It is useful to note that in almost every way Luke’s version of the end of Judas differs from Matthew’s, precisely because what is crucial for Luke is the defection of Judas from the ranks of the 12. Matthew has Judas try to return the money to the priests, motivated by deep remorse. He repents however late and weak that may be, and his refusal to keep the money is the sign of that repentance. It is the priests who take the money and buy a place of burial for foreigners; hence the name of the field. Matthew ends his account with scripture citations that concern the price of the field, not the end of Judas (Zech.11:11-12 and Jer.32:8-9). Luke’s interest is in Judas’ fate and his use of the money for self-aggrandizement. Judas does not return the money he got from the priests but goes out to buy a farm (Acts 1:18). By so doing he acts exactly how Ananias and Sapphira will later act by refusing to share what they own with the new community, and like them, the result is death for withholding their goods. Judas flatly refuses to join his material goods with the community, and as a result he dies on the farm he has bought with the blood money, and eventually, as the psalm suggested, “his dwelling place will be deserted.” This reading makes clear the precise meaning of the final thing that Luke says about the betrayer: he left his “place” in the ministry by “going to his own place” (Acts 1:25). As Luke Timothy Johnson says in his fine 1992 commentary, “spiritual disaffection is symbolized by physical acquisitiveness.” To replace Judas, the remaining disciples choose a new member from among those who have been following Jesus “from the baptism of John,” namely from the beginning of the public ministry of Jesus. In time-honored fashion, they “cast lots” and Matthias is chosen. Matthias is never again mentioned in the Bible. But now the circle is once again complete, and the events at Pentecost are readied for the gift of the Holy Spirit.

It is a grim tale, but an important one. Luke, both in his Gospel and in his second volume, the Acts, especially warns again and again about the dangerous lure of stuff, things that can impede and destroy genuine ministry. Of course, he is all too correct. In our time of the widening gulf between those who have much and those who have little, we reckon daily with this uncomfortable truth. Those of us in the west have more than we need, in too many cases, while others in other parts of the globe have far too little. My need for comfort and ease, backed by my monetary resources, threatens to overwhelm and drown out the cries of my fellow humans who ask for their share. Like Judas, I would rather purchase my own field, build my own house, hoard my own goods, rather than share it with those in need. How far we are from that golden vision of Acts 4:34: “there was not a needy person among them, for as many as owned lands or houses sold them and brought the proceeds of what was sold.” That amazing statement is one of the hallmarks of the new restored community of Christ, promised and sealed by the gift of the Holy Spirit. Not a day goes by that I am not haunted by that vision. Lest I, we, become like Judas, I think it is crucial that that vision not be allowed to fade from among us, however far we currently find ourselves from its realization.