The Righteous Mind: Why Good People Are Divided by Politics and Religion, by Jonathan Haidt 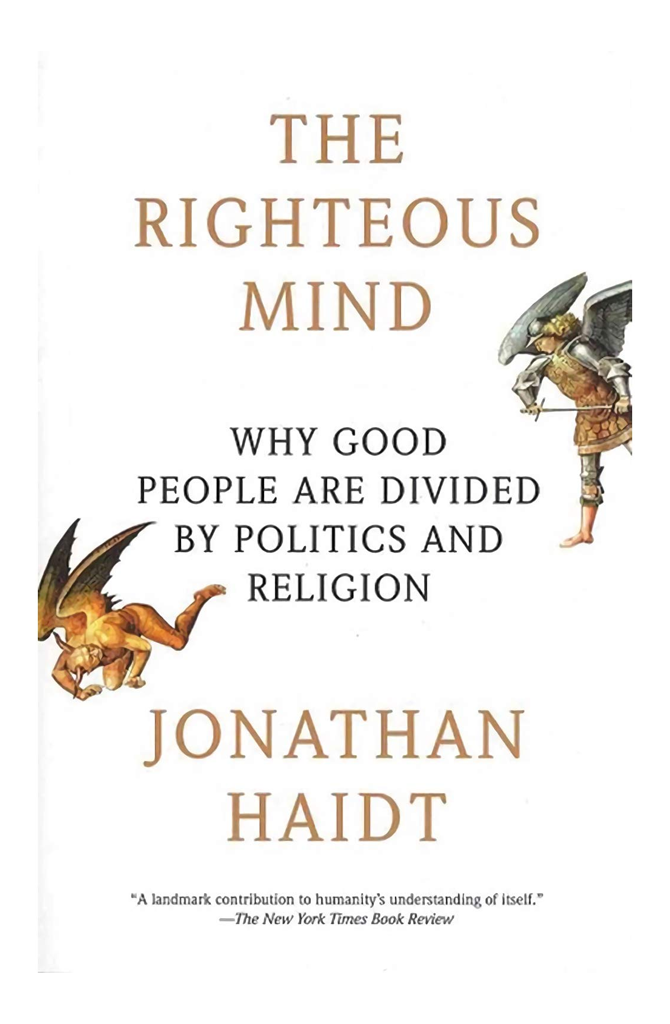 The Righteous Mind: Why Good People Are Divided by Politics and Religion, by Jonathan Haidt

Colleagues, friends and fellow preachers occasionally ask me, “So what are you reading these days?”  For the first few years of my pastorate, the answer was usually a theology, ethics, church leadership or homiletics book, which made sense, as I was still in seminary.  For too many new preachers out of seminary the answer to that question is too often, “Nothing.”  But I am fortunate to have kept up the habit and discipline of reading.  And because I had a homiletics professor who encouraged his students to read non-theological books—fiction, poetry, etc.—in order to keep our imaginations and sensitivities to language heightened, I frequently find myself reading books that are not targeted towards church leaders.

One such book is Jonathan Haidt’s The Righteous Mind: Why Good People Are Divided by Religion and Politics (2013).  This engaging, accessible work has done more to help me think in new ways about the task of proclaiming the Gospel to a demographically and ideologically diverse congregation than anything I’ve read in the last year.  Haidt is a moral psychologist, which is to say that his discipline of research is not interested in answering the question of ethicists: “What is morally right and wrong?” but rather, “How do human beings (socially and psychologically) determine what is right and wrong?”  Haidt’s writing style is easy to follow as he lays out his journey through this question, through mountains of research and evolutionary biology, which never lost my attention.

Haidt uses three central metaphors to help the reader understand what is distinct about human morality.  Among them is the idea that the “organ” of morality in Homo sapiens is like a tongue with six taste receptors.  Just as a tongue has different receptors that sense sweet, salty, sour and bitter foods, the human morality organ consists of six sensitivities to: care/harm, fairness/cheating, liberty/oppression, authority/dissent, loyalty/betrayal, and sanctity/degradation (or purity/contamination).  And the phenomenon of division between liberals and conservatives in contemporary American politics can be better understood when we notice that liberals tend to build their sense of morality on issues of primarily care/harm and fairness/cheating and little else, whereas conservatives utilize a broader base of moral foundation, more highly valuing things like loyalty, authority and sanctity than liberals.  Haidt also addresses the curious category of what Americans know as libertarianism.  The author also suggests that the origin of these morality matrices have both strong cultural factors as well as genetic predispositions.

So how has this book helped my preaching?  Well, first of all, it helped me better understand exactly in what way I am a liberal when it comes to my morality.  And it helped reveal my biases when it comes to my hermeneutic.  For example, I almost always see Jesus’ compassion for the poor and his challenging of authority on behalf of the abused.  And, of course, I’m not making that up.  But I tend to minimize or miss altogether the value Jesus places on his radical obedience to the authority of God, and the importance of sanctification and protecting the Church from various cultural contaminants in the New Testament.  I see that I unintentionally leave a significant portion of the congregation still hungry by exalting only the parts of the gospel that are palatable to me.  There are other elements of The Righteous Mind that make it a worthwhile read for preachers, particularly his discussion of human beings as inherently “groupish” and uniquely cooperative among other primates, which helps understand the social function of morality as a mechanism to hold the group together and explains our perseverance through history’s calamities, which made me as a liberal think twice about dismissing so easily moral foundations more prominent among conservatives that I used to dismiss as irrational.

What a blessing it was to be encouraged to read outside the religious canon and to have stumbled upon this delightful and engaging book!