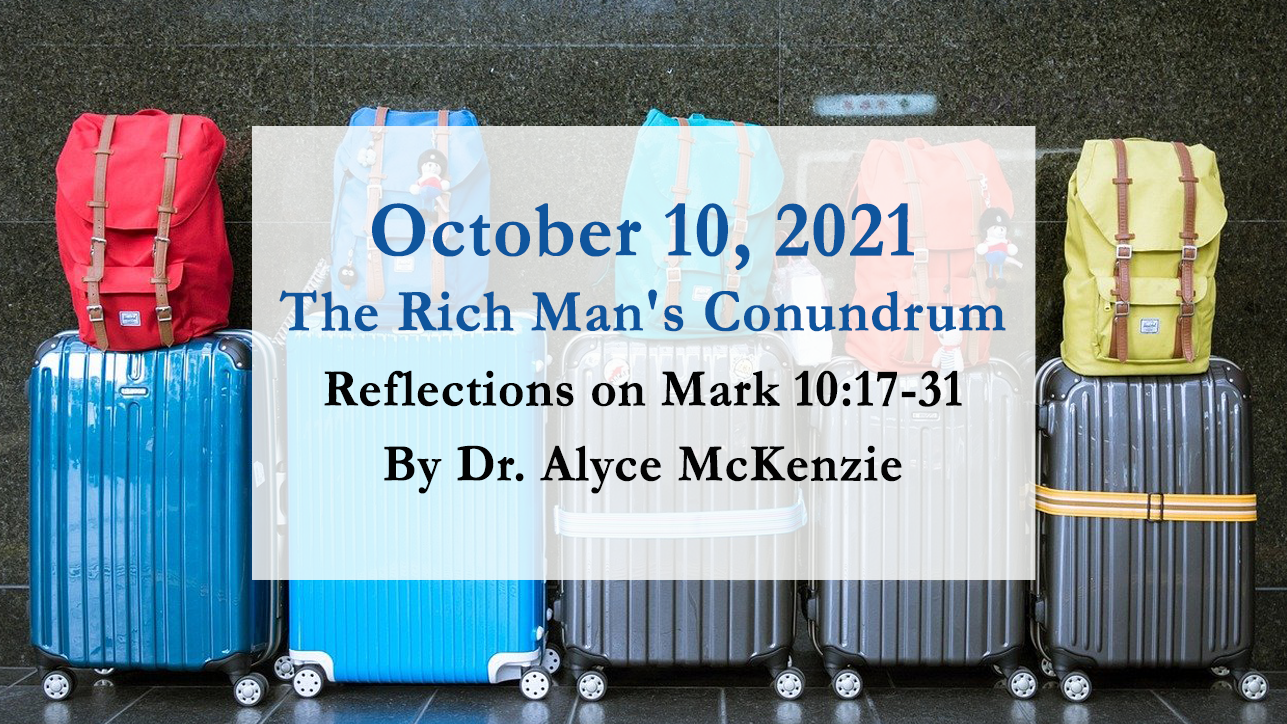 I had lunch with Greg Garrett a few years ago. Greg is a novelist, social commentator, and professor of English at Baylor University. In addition to teaching and speaking, he is a prolific and profound writer of both fiction and nonfiction. He writes a column on religion and politics for Patheos.com. I always like to ask writers their secrets for carving out time in busy lives to produce their books. He had a great two-fold answer:

That's great advice for everyone who has good intentions to accomplish something but just can't seem to exert the discipline and stomach the sacrifice needed to achieve it. In the language of a self-help book I read once, some people "yearn" to achieve things, but they don't "burn."

Greg Garrett's advice to writers translates into the best piece of advice the Rich Man never took. It's worth asking ourselves whether we are willing to take it as we encounter his story in the 10th chapter of Mark. Like the Rich Man we admire Jesus ("Good Teacher . . ."), and we have good intentions ("I have kept all these since my youth"). But, like him, we struggle with the fact that there is a deadline for our decision for discipleship and, like him, we have trouble stomaching the sacrifices it takes.

"There is no one who has left house or brothers or sisters or mother or father or children or fields, for my sake and for the sake of the good news, who will not receive a hundredfold now in this age—houses, brothers and sisters, mothers and children, and fields, with persecutions --and in the age to come eternal life."

When I was in Germany at a conference, I suffered from a retinal tear and had to have laser surgery in a small town near Rothenberg. The doctor told me, in excellent English and with great politeness, to take it easy for several weeks. No jogging, no lifting anything over 20 pounds, and no flying for two weeks. The jogging part didn't present difficulties. I wasn't going to suddenly start doing something I don't do anyway. But the flying part and the lifting part presented problems. I had to fly home to Dallas in a week, and I had to carry my suitcase and backpack. So when it came time to pack to return home, it was time to jettison everything I could. I left my smaller backpack, my umbrella, the pair of shoes I had worn out walking on cobblestones for two weeks, a jacket, a bulky sweater, and all the toiletries I could do without on the trip home. Keeping these things put my eye under too much pressure.

It occurred to me that that is not a bad metaphor for the Rich Man's plight. He needed to jettison his wealth because it was what was putting pressure on his life. It was, apparently what was causing him the anxiety that was not adding a single cubit to his span of life. It was the treasure that occupied the place where his heart was supposed to be. It was the mammon that kept him from serving God. It was the worldly gain that threatened to lose him his soul. It was the bulk that made him too wide to work his way through the eye of the needle (Mk. 10:25).

There are many varieties of baggage that necessitate our wearing a sign that says "WIDE LOAD." All of them need to be left behind when we head home to Jesus to follow in his Way. For James and John, it was prestige (Mk. 10:35-40). For Peter, it was fear, fear of Jesus' risky, sacrificial future, and fear that he, as a follower, would somehow share in it (Mk. 8:31-33). For the Pharisees, with their repeated demands for signs of Jesus' legitimacy, it was the craving for security (Mk. 8:11-13).

Whatever the baggage weighing down our particular life, Jesus commands us to leave it behind. In almost the same breath, he assures us that in sacrifice there is good news and great benefit to ourselves and others. The challenge is that we don't experience those results until we actually divest ourselves of our baggage. Given the leap of faith between the sacrifice Jesus commands and the compensation he commends, it is no wonder that the Rich Man goes away sorrowful, or, as the NRSV puts it, "shocked" and "grieving."

The opposite of shocked and grieving would be, I think, relieved and rejoicing.

How to get from one to the other? I'm going to remember Greg Garrett's two pieces of advice that apply to anything worthwhile we want to accomplish, discipleship included!

Realize there is a deadline to be met.

Ask yourself—what do I have to give up to have the time and energy to pursue it?