The Reign of Christ - Reflections on Jeremiah 23:1-6 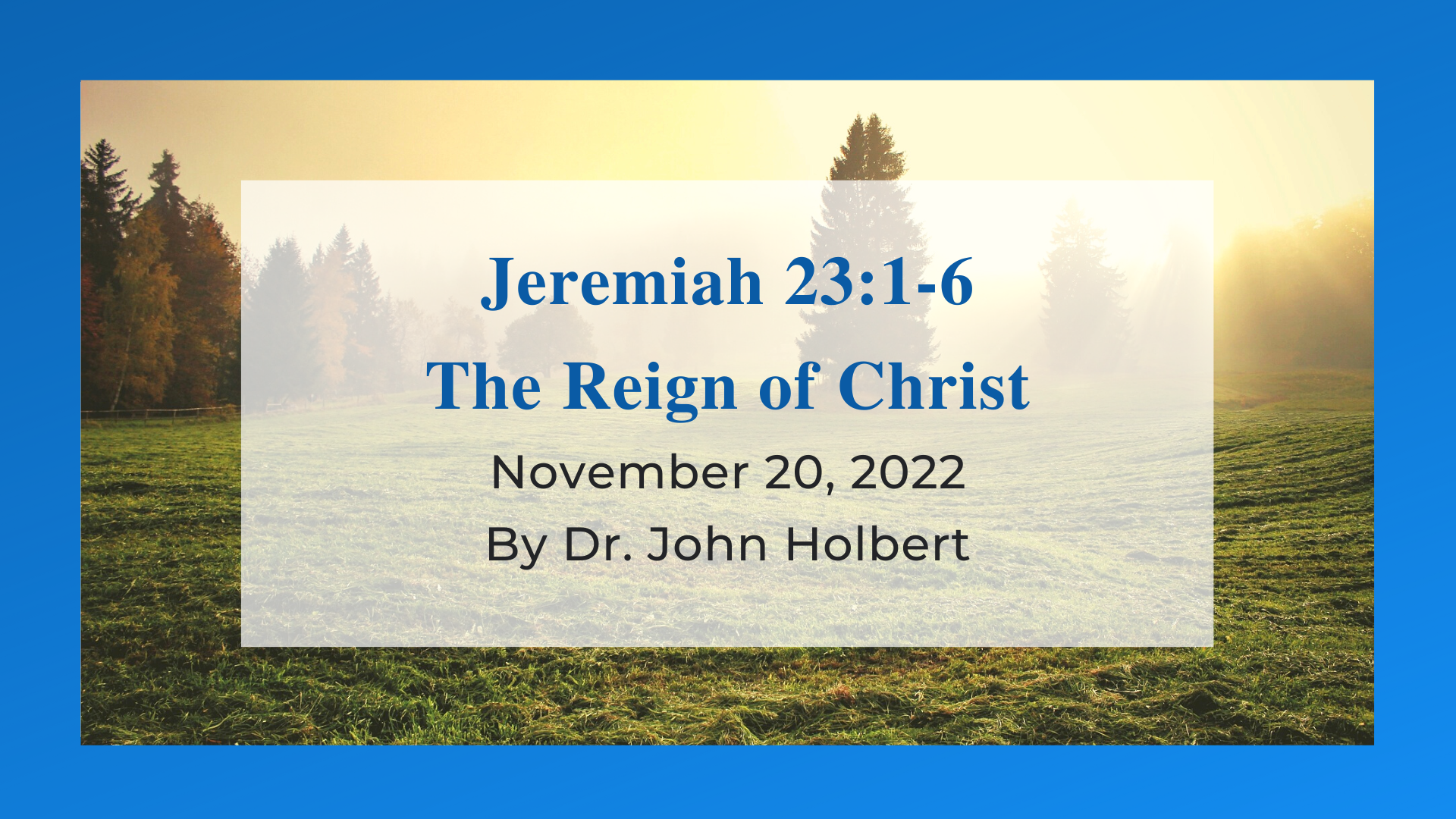 The Reign of Christ

We have now arrived at the final Sunday before Advent, the day we now call “The Reign of Christ.” This used to be named “Christ the King” Sunday, but concern for a more fully inclusive language made it necessary to change the masculine word “king” to a far better “reign,” thus rendering the day both less exclusively male in tone, but also suggesting that the concern of the day is not merely to announce the coming of the Christ, but to indicate that what we celebrate is the rule or reign of the “righteous branch,” not just an expected monarch. Jeremiah makes it plain that the current rulers of Judah, those he saw first-hand in the 7th and 6th centuries, were not the rulers that God had in mind for Israel and for the world.

He calls the contemporary kings of Judah “shepherds who destroy and scatter the sheep of my (God’s) pasture” (Jer.23:1). Just what sort of shepherds are these? Good shepherds do not destroy and scatter their flocks; they nurture, protect, and keep them safe from dangers. It is hardly God’s desire that the shepherds of Judah act like these so-called rulers. No! God has other plans in mind. “I will raise up shepherds over them who will shepherd them, and they shall not fear any longer, or be distressed; neither shall any be missing” (Jer.23:4). Real shepherds are coming, says YHWH; these current leaders are not they, but are rather pretend shepherds only, intent on destruction and neglect of their flocks. In the later New Testament gospels, it is said on more than one occasion that Jesus of Nazareth is not like these appalling shepherds, but is rather a “good shepherd,” one who knows his flock and whose flock knows him (for example, John 10). That is the sort of shepherd God promises to provide for the chosen people.

But just who does Jeremiah have in mind? Does he have anyone particularly in mind? The words he uses are at the same time vague and specific. “Look! The days are coming, says YHWH, when I will lift up for David a righteous plant, who will rule as king, and act wisely, and shall do justice and righteousness in the land” (Jer.23:5). This promise of God’s gift of a new ruler is written carefully and clearly.  The ruler is expressly “for David.” This implies that the memory of David the king has become larger than life for Judah and that any true ruler will both be like the great David but will also reign on behalf of the great David, who more than two centuries after his death, has become the standard by which all kings are measured. After all, he ruled when Israel’s power was at its height, its territory reaching to its largest extent, its fame growing throughout the region. Jeremiah lived at a time when Judah was a mere rump state of the greater Israel of David’s time, so little wonder that the recall of David’s grandeur had become the memory of a time of glory.

But note that Jeremiah does not emphasize the grandeur of the Davidic reign, but rather its description as a time of justice and righteousness, those two prominent words that the prophets of Israel continually used to express the real calling of anyone in Israel, especially the kings, who claimed to follow the will and way of YHWH. This coming ruler will “act wisely,” not by being clever or able to survive in the exercise of power, like David’s son, Solomon, but this ruler’s wisdom would be seen through his attention to justice and righteousness. As the coronation Psalm 72 says, “May the king judge your people with righteousness, and your poor with justice” (Ps.72:2). This new ruler will do precisely that.

And because the ruler will do that, will act with righteousness and justice, “in his days Judah will be rescued, and Israel will rest secure” (Jer.23:6a). The struggles of the nation, struggles that included oppression of the poor and denial of basic rights for all, will no longer exist, and the result will be wholeness and safety for all. The “righteous plant” will be called “YHWH is our righteousness” (Jer.23:6b). We do not manufacture our own righteousness, says the prophet; YHWH is our righteousness, and we live out God’s righteousness in our lives under the guiding influence of YHWH and of YHWH’s new ruler.

It is not difficult to see how the authors of the New Testament found in this passage (and an almost identical passage in Jer.33:14-17) inspiration for their growing understanding of just who Jesus was for them. He is, they said, the “righteous branch” of David who has come at God’s call to activate justice and righteousness in the land and to create the conditions for safety and wholeness for all people. “Branch” is a possible translation of the Hebrew noun, but the word is rather more general than that, including all manner of plants within its meanings. I grant that “branch” is perhaps the more pictorial translation, representing an actual branch from the tree of David. That fact is also why the writers of the gospels go to such lengths to connect Jesus with David, because of these Jeremiah texts, along with several other texts from the Hebrew Bible, hold up David as the ancestor who should be emulated and celebrated in the fresh gifts of God for leadership of the chosen people.

Jeremiah and his followers obviously longed for a new David, because the leaders they saw in the flesh simply were inadequate for the time. One could hardly blame the prophet for thinking this, given the poor monarchical examples he witnessed as Judah fell under the boots of Nebuchadnezzar early in the 6th century BCE. Someone far better was needed to shepherd the people of God, someone who practiced justice and righteousness, someone who could actually be named “YHWH is our righteousness.” Did Jeremiah have someone in his mind? I doubt it. But the early Christian community clearly did have a person in mind, and that person’s name was Jesus, the righteous branch of David, the doer of justice and righteousness for all people.