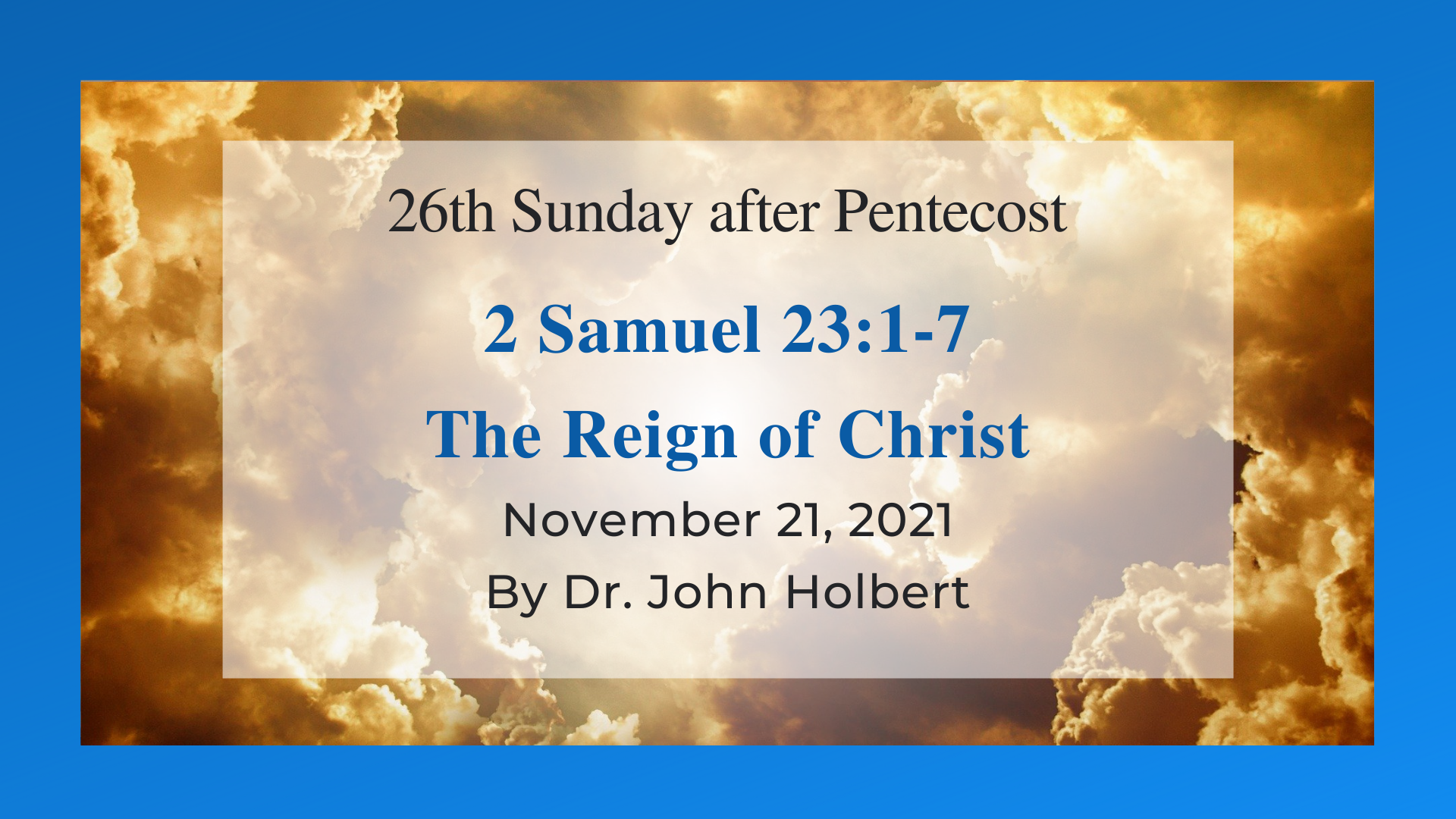 This last Sunday in November, the Sunday before the first Sunday in Advent, has long been designated “Christ the King” Sunday. With the turn toward more inclusive language, the name is now “The Reign of Christ.” The Sunday is seen as a prefiguring, a premonition, of the coming of the Christ child into the world. Thus, texts from the Hebrew Bible are chosen to offer, usually in grand poetry, glimpses, images, of the reign of Israelite kings, often King David. This “reign of Christ” Sunday gives us an ancient and difficult text from the grab-bag of texts that concludes the long tale of King David. The Hebrew of this short poem is exceptionally abstruse, requiring careful and contested evaluation to make clear sense of the spiky language. Those of us focusing our attention on the Advent season, as every pastor must in late November, see these words through the lens of the anticipation of the coming of Jesus, celebrated beginning next Sunday.

One thing must be made clear in the first verse: these are decidedly not the last words of David. Those words are not found until 1 Kings 2:9, a dreadful account of David’s demand that his heir, Solomon, murder an old and helpless enemy, Shemei, who taunted David long before when he was tossed from Jerusalem by another ambitious son, Absalom. This mafioso-like deathbed demand from Don to Capo resembles not at all the lofty poem of 2 Samuel 23. Yet, almost certainly the poem predates the Kings narrative. Perhaps ironically, the monstrous last words of the king have become over the centuries far more memorable than the complex poem that precedes it both canonically and temporally.

The poem is preceded in 2 Samuel 22 by a long victory song from David, a psalm that is repeated, nearly verbatim, as Ps.18. Any attempt to reconstruct the history of how these literary stands came together to form the Samuel text we now have is doomed to failure. Yet, it is at least possible to suggest that 2 Sam.23 was a poem in early circulation around the reign of the king, some scholars even claiming that the poem is from the same era as David, and may perhaps be a piece from the king himself. If so, the poem may be said to be the last piece of poetry from the royal poet, King David. If that is even possible, the content of the poem may give insight into the central concerns of the king, however much the narrator of his long prose story appears to emphasize the many negative features of the man.

The poem sings of David as “a man raised on high,” who became the sweet singer of Israel” (2 Sam.23:1), a phrase made famous in the KJV, and regularly used to announce David as Israel’s greatest poet. David then proclaims that “YHWH’s spirit has spoken in me” (2 Sam.23:2) and adds, “the Rock of Israel has spoken” (2 Sam.23:3a). That is, when David has spoken, his words have been given to him by YHWH, because David is YHWH’s choice. Then David turns to his work as king. “He who rules humans justly, who rules in the fear of God” (2 Sam.23:3b). This is essentially what God has asked of the king, just rule in the light of the worship and reverence of God.

2 Sam.23:4 appears to be a metaphor, comparing the king to the rising sun on a cloudless morning, a sun that radiates light and warmth on the earth, causing it to sprout grass. If that is the meaning—and the text is quite complex here—it implies that the king’s rule is a source of blessed fruitfulness to his subjects. Vs. 5 is itself difficult to read easily, but the second line obviously refers to the “eternal covenant that God gave,” that conviction that YHWH made for David, and for no other of Israel’s kings, a covenant that would never be abrogated, thus affirming the notion that as long as a direct descendant of David’s sat on Israel’s throne, YHWH was certain to remain as Israel’s God (see 2 Sam.7 for the full account of this belief). Because of this everlasting covenant, David, with God’s help, will make the house of Israel blossom.

In contrast—and in Hebrew poetry there is usually a contrast—“the worthless ones are like thorns—uprooted every one, that cannot be picked by hand” (2 Sam.23:6). Unlike the green grass, blossoming under the fertile reign of  David, “worthless ones” are thorny, and cannot be touched by any human hand. Should anyone try to touch them, he must get for himself “iron or a spear shaft,” and then “burn them where they are” (2 Sam.23:7). All one may do with the nasty thorns is rake them up with an iron tool or a spear, and set them on fire. This must be done in order to be completely rid of the threat such nasty ones pose. This will be the fate of all makers of mischief, that is all who oppose the only legitimate monarchy of David and his heirs.

My reading of the poem is hardly certain at every point, but it does make the claims I think the poem attempts to make. The king is the spokesperson of YHWH, and YHWH has promised the king an eternal covenant. Early Christians readily and joyously applied these two ideas to the one they came to call king, Jesus of Nazareth, who came from God, spoke the word of God, and who appeared as heir to the great David, and thus was in the line of David’s eternal covenant from God. Such, I think, is a way to attach the ideas of this enigmatic and ancient poem to the reign of King Jesus, whose birth we celebrate again in Advent.