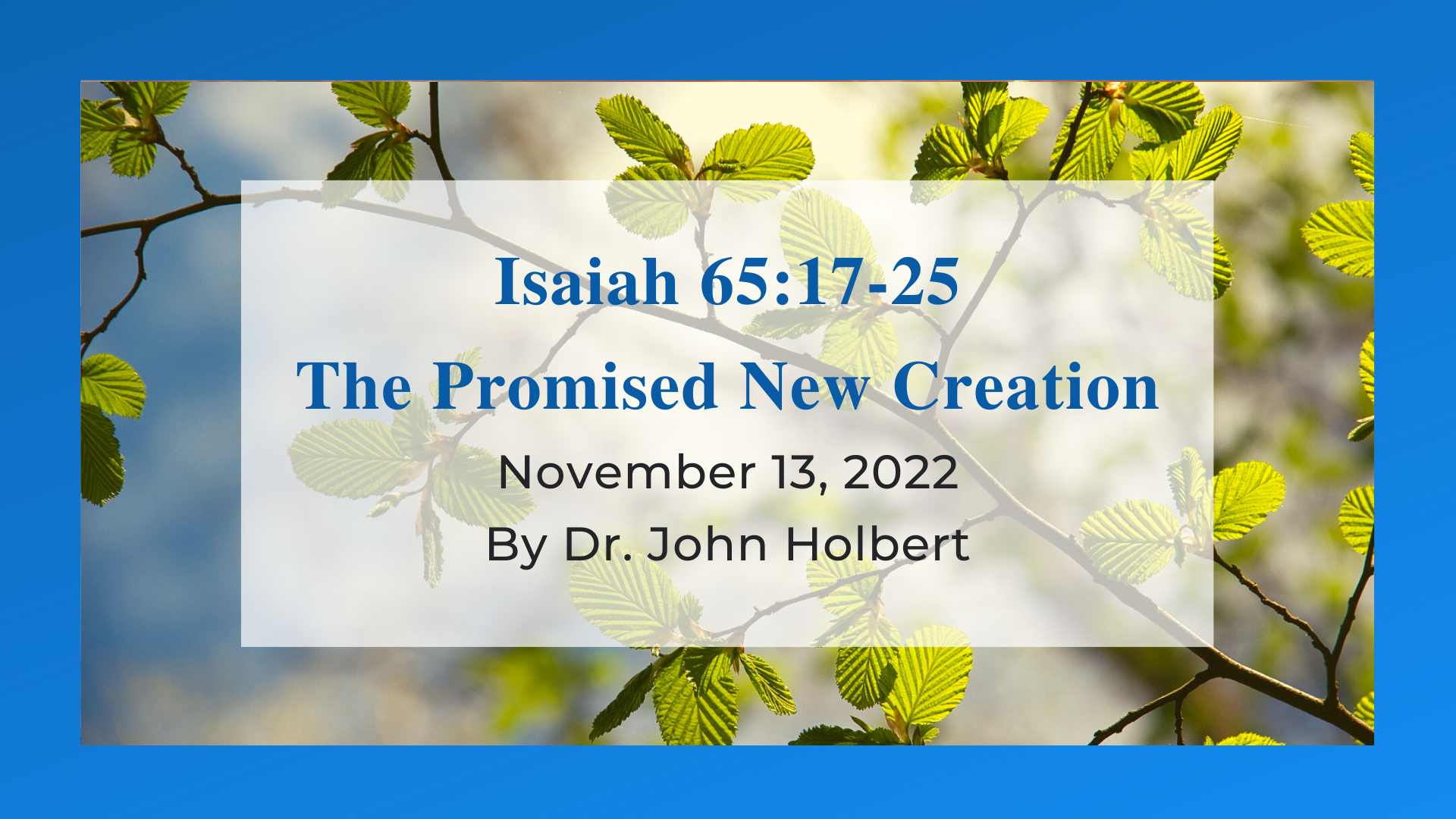 As we approach Advent, the texts begin to lean toward the richer promises of God. This famous text from the latter part of Isaiah’s long book, perhaps a part of a “third” Isaiah, or even a “fourth,” describes a world made fresh by YHWH, a world both like and unlike the one we know. When God announces a new creation, God claims that the world will be made new, not that a new world will be made. This is an important distinction.

In more conservative and pseudo-fundamentalist regions of the Christian universe, there is much talk of God’s coming new world, a world where true believers are “raptured” (a completely non-biblical belief!) into some heavenly realm, while the remainder of the earth’s inhabitants, those who have refused to toe the lines established by those “true believers,” will descend into a fiery Hell for all eternity to be punished by God for their unwillingness to believe correctly. In short, the true followers will sing and pray for eternity and witness the terror and horror of those tormented in the nether regions of the earth. And that is the promised new creation of God, according to the modern monsters of exclusivism and bigotry.

Such a portrait is about as far from the images of Isaiah as can be imagined. In the prophet’s picture, the new heaven and earth will be new only in the sense that the full portrayal of the promises of God, promises that have been too long thwarted by the refusal of humanity to join God in the world God had in mind from the beginning, will not be played out. Note carefully the images presented about this new heaven and earth.

“Jerusalem will now be a joy, its people a delight” (Is.65:18). This is no completely different Jerusalem, sited in some other earthly place. This is the Jerusalem we have known, only now only a place of joy, its people only now a pure delight. “No more shall the sound of weeping be heard in it, or any cry of distress” (Is.65:19). The inequalities of the city, leading to sorrow, weeping, and distress will be no more as the city God envisioned will appear, a place of shalom, of justice, of access to the goods and services of the place available to everyone.

No more infant mortality (Is.65:20a), surely very high in any ancient city; no more early dying—a 100-year-old will be thought of as a youth, and anyone falling short of a 100 will be an enormous and sad exception (Is.65:20b). Those terrible days the prophets predicted where houses built and vineyards planted would be enjoyed by enemies will be no longer, (Is.65:21-22a), for “like the days of a tree shall the days of my people be; my chosen ones will long enjoy the work of their hands” (Is. 65:22b). All labor will be fruitful, and children will be born not for “terror,” but for hope and long life (Is.65:23a).

And perhaps best of all, the relationship between YHWH and the people will be so close, so intimate that, “before they call I will answer; while they are still speaking I will hear” all that they wish to say (Is.65:24). YHWH will be so attuned to the needs of the people that God will hear and react to them without their having to express those needs fully. And the ultimate conviction that this is indeed a new heaven and a new earth may be found in the final, famous portrait in Is.65:25:

“The wolf and the lamb will feed together,

though the snake—its food will still be dust (Gen.3)!

They shall not hurt or destroy on all my holy mountain, says YHWH.”

Former antagonists, wolf and lamb, will now feed quietly and calmly together, while fierce lions once again become vegetarians, as they were prior to the monstrous flood of ancient days (see Gen.1:29-30). And most importantly, no one, human or animal, will again “hurt or destroy” on God’s holy mountain.

This is the rich portrait of God’s promised new heaven and earth. The appalling ideas of some of our fellow Christians of a few redeemed ones, gloating over the mass of eternally tortured and abused humans, is hopelessly wrong, well-nigh blasphemous in its picture of a divided humanity at the end of days. Far from it, says God through the words of Isaiah! The new heaven and earth will be a place of complete shalom, blessed unity where all, human and animal, find their place of peace and harmony. We Christians have long hoped that with the coming of Jesus, such a new world may appear. Nearly 2000 years later, that world still seems a distant chimera. Nevertheless, those of us Christians remain convinced that new heaven and earth can and will come, and we continue to dedicate our lives to helping God bring it about.