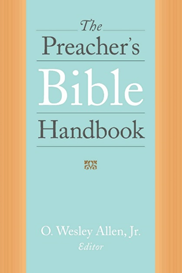 After preaching an average of 48 out of 52 Sundays for forty-one years, The Preacher’s Bible Handbook, edited by O. Wesley Allen, is a book that I had always pined for—I just did not realize it. In this one helpful volume, Allen has gathered brief, substantive essays on the historical background, context, and theological trajectories of each book in the Bible.

Allen has assembled a capable group of biblical scholars for this task. The Preacher’s Bible Handbook’s writers come from a variety of ecclesial backgrounds—United Methodist, Episcopal, Presbyterian, and Lutheran. Of the sixteen writers, seven are women. The target audience appears to be the scholarly pastor. The writers, each erudite in their respective fields, present material in a way that is relevant for the purposes of preaching and/or teaching—learned, but not pedantic. Some of these authors also have sterling reputations as fine preachers; we acknowledge the others for their solid biblical scholarship.

In The Preacher’s Bible Handbook, the writers approach individual biblical texts in various ways. In what follows, I’ve chosen three genres of biblical texts—prophecy, Gospel, and wisdom as examples of the varied approaches of the authors in presenting their particular essays.

When John Holbert, Lois Craddock Perkins Professor of Homiletics Emeritus, Perkins School of Theology, writes on Haggai, he does so in three pages. Holbert shares both the history and background of this Minor Prophet. Included is a retracing of the Jerusalem Temple’s destruction by the Babylonians. Holbert recounts the later Persian monarch Cyrus and his release of Israel’s captives. Holbert visits the politics of temple rebuilding along with how Ezra and others related to the prophet Haggai. This history Holbert ties together with the theology of Israel, YHWH, and the temple building project. He also suggests several preaching themes that emerge from this underutilized book of the Hebrew Bible.

When Ron Allen, Professor Emeritus of Preaching and Gospels and Letters, Christian Theological Seminary, Indianapolis, writes on John, he focuses on what he calls “the distinctive worldview of John.” In this section Allen writes about time. He explains how John uses time and the term “the world” (kosmos). Allen illuminates how John designates “the world” as a site for that which God in Christ contends with evil. The following section (John’s Picture of Jesus) tackles John’s distinctive handling of the term "logos." Allen shows how the evangelist employs “logos” to reflect John’s high Christology. Next, comes a section titled: “Three Significant Theological Problems When Preaching on John.” Allen names here some challenges preachers encounter in John’s message.

Last, we come across what Ron Allen titles “Three, Four, or Five Steps for Engaging the Gospel of John.” Although it appears Allen can’t pick a number, the title really points to several ways to understand and preach specific texts in John.

When Alyce McKenzie, Le Van Professor of Preaching and Worship, Perkins School of Theology, writes on Proverbs and Ecclesiastes she uses “context language” to offer insights into these two books. Historical, Theological, Literary, and Homiletical contexts are all profitably explored. Most preachers assume that these texts are enigmatic, problematic, books from which to preach. Perhaps that’s why we see so few sermons preached on a regular basis from Proverbs and Ecclesiastes. For preachers who avoid Proverbs and Ecclesiastes in favor of Psalms, Isaiah, the Gospels, and the Epistles, McKenzie’s brief, in depth re-examination of these book’s details is beneficial.

All in all, The Preacher's Handbook is a one-stop shop to guide the preacher as he/she prepares to preach on a biblical text:  usually only seven or fewer days away. Two thumbs up.