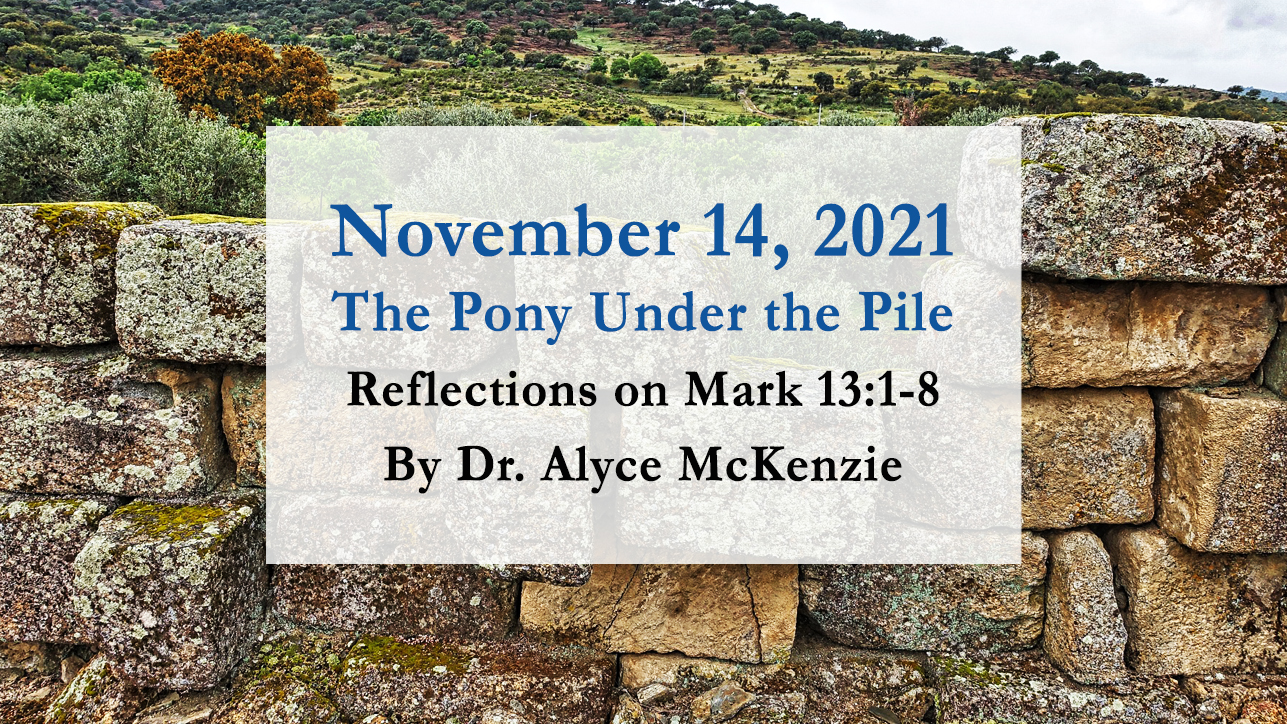 The Pony Under the Pile: Reflections on Mark 13:1-8

This text reminds me of the old story about the optimistic boy who woke up early on his birthday and looked out his window to see a giant pile of manure in the yard outside. He ran downstairs, got a shovel, and started happily shoveling. "What are you doing?" asked a friend. "I know there's got to be a pony in there somewhere!" said the boy.

This text reflects Jewish apocalyptic theology's vision of the time of suffering preceding the coming of the Messiah, which was sometimes described in terms of labor pains (France, 509). Jesus doesn't specifically answer the question the disciples ask in 13:4 "When?" The wars, earthquakes, and famines show only that the birth is coming, not when it will come.

Mark places this text right before the passion of Jesus. The message to his persecuted community is that they need to prepare to participate in Jesus' suffering and eventual victory by maintaining their witness to the truth in difficult times. The text intends to give them hope and encourage steadfastness in the faith in the face of challenges to come. To seek in this text a detailed schedule of the events of the end-time is to misunderstand its purpose, which is to encourage persistence in the present, not to peer into the future. New Testament scholar Hugh Anderson describes this text as issuing "an appeal to faith to recognize that concealed in the tribulations of the present lies the coming glory of God to be manifested finally in the parousia of the Son of man, whose own triumph is hidden in Jesus' way of the cross" (Anderson, 289).

This text on the surface seems filled with bad news and warnings of tribulations to come:

Warnings of Tribulations to Come:

Fortunately, in this pile of bad news and warnings, there is also some comfort and good news to be found:

Assurance #1: In tough times, we will be given words to speak.

Do not worry beforehand about what you are to say; but say whatever is given you at that time, for it is not you who speaks, but the Holy Spirit (13:11).

I take this to be an assurance that the Holy Spirit will support us in trying times and that we need not be filled with dread over trials that lie ahead. However, I don't take it as an excuse to renege on our responsibilities to use our gifts for God in the present. After all, Mark 13:10 tells us that "The good news must be proclaimed to all nations."

Martin Luther famously tried slacking off once. He depended on the Spirit to take up the slack, but it didn't work out very well. The story goes that Luther, when a professor at the University of Wittenberg, decided one week that he would take Mark 13:11 at face value. He spent no time whatsoever on his Sunday sermon and instead worked on his commentary on the Psalms. He later recounted what happened when he ascended the high pulpit of the Castle Church at Wittenberg and looked out over the sea of expectant faces. "Sure enough, the Holy Spirit spoke to me, and the Spirit said, 'Martin, you didn't prepare!'"

He also offered this advice in the darkest days of World War II: "If you're going through hell, keep going." This saying is an apt summary of the good news that is to be found beneath the pile of fears and famines, pains and persecutions of Mark 13.

Country singer Rodney Atkins echoes Churchill's words in his lyrics to "If You're Going Through Hell, Keep on Going:"

Well you know those times
When you feel like there's a sign there on your back
Says I don't mind if ya kick me
Seems like everybody has
Things go from bad to worse
You'd think they can't get worse than that
And then they do
If you're going through hell
Keep on going,
Don't slow down
If you're scared, don't show it
You might get out
Before the devil even knows you're there.

This all begs the question, "When we're going through hell, how can we keep on going?"

The answer? By remembering two pieces of very good news concealed in the pile of pains, pangs, and persecutions of this text: