The Mystery and The Passion: A Homiletic Reading of the Biblical Traditions by David G. Buttrick 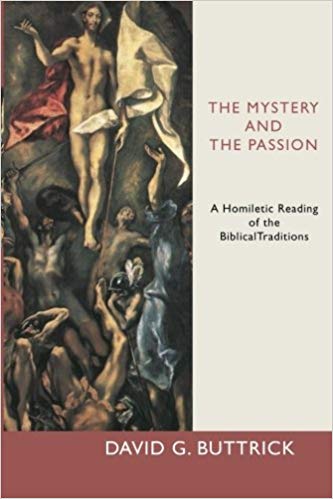 Dr. David G. Buttrick’s book, “The Mystery and The Passion,” is a homiletic exploration of the Gospel traditions regarding Jesus’ death and resurrection.  Dr. Buttrick examines the familiar texts that tell of Passion and glory. He provides a harmony of Synoptic texts, using the sequence and the numbering system provided by Huck’s Synopsis, employed in Gospel Parallels. He is not very concerned with providing in-depth historical excursuses of the texts, as his aim is to get at the theological substance of the texts; or the gospel to be preached.

Dr. Buttrick encourages preachers today to preach the same message that was articulated by the prophets and the apostles. He exhorts us to hold up the cross and to turn to the Resurrection as a witness to our hope in the promised power of God.  We, preachers of the 21st century church, “Like many of the first Christian theological explorers, investigate God’s activity, tracing mysterious movements of grace through all human time and space,” which allows us to preach the gospel and explain theology at both profound and practical level.

Buttrick opposes the idea of celebrating the Resurrection as an annual cultic myth that follows the tragic drama of the Holy Week, complete with bedecked buildings, Easter eggs, and bright discount-house clothes for the kids. He points out that we have allowed ourselves to be subjected to commercialization of the Resurrection where the focus shifts away from its importance to the commercial exploitation of the Easter festival.  He proposes that in order to preach the reality of the Resurrection today, we must begin by being scandalously honest about the church’s complicity in this trivialization of Resurrection.

Professor Buttrick inquires into what it means to say that the crucified Christ is risen. As an illustration, he uses a picture of a risen Christ that depicts Jesus as a clean cut Kirk Douglas.  The artist’s portrayal of Jesus was obviously not representative of the crucified Christ.  Buttrick says, “An old church janitor took one look at the bulletin cover printed for one Easter Day by one of the religious publishing houses, and quickly noticed the trouble at once: “No nail holes,” he said.” In truth, the image of Christ crucified cannot possibly suggest that his suffering was glamorous.  Buttrick says, “We are arguing that the basic structure of the Resurrection message is reversal that cannot, indeed must not, be forgotten.”  The pardoner is condemned, the judge is judged, and most of all, the justifier is the one who is found guilty.  Thus, every Christian’s confession of the risen-crucified Christ is a calling to a lifestyle that reflects God’s own self-giving. He says, “We must not suppose that preaching God’s new order will be popular.  Such a gospel will be rejected by both the church and the world.”

In part two of his book (The Passion of Jesus Christ), Dr. Buttrick continues to examine the homiletical implications of the biblical traditions. “The violent death of the crucified Christ confronts us all with the huge fact of sin,” says Buttrick.  He then turns our attention to the fact that Jesus breaks the power of temptation by the power of God’s love. In the Promise of Salvation (that is the Epilogue), Dr. Buttrick lays out a soteriological understanding of the world that in his words is “sin-struck.”  In this world “God exists at the fringes of contemporary life as a memory from childhood or as a ritual left over from the religious past; a ritual that is still mumbled at significant occasions such as births, deaths, or marriages.” Nevertheless, the figure of Christ, the cross and the Easter glory disclose the mysterious saving power of God, ever working in and through the human world, now.

I recommend David G. Buttrick’s book to the preacher who is concerned with cultivating a homiletic analysis of the Passion that leads them to the deeper, life-changing, transformative power of the Living God and inspires them to preach the right now saving power of the crucified Christ in a “sin-struck” world.