The Mount of Jumpification! - Reflections on Mark 6:1-16 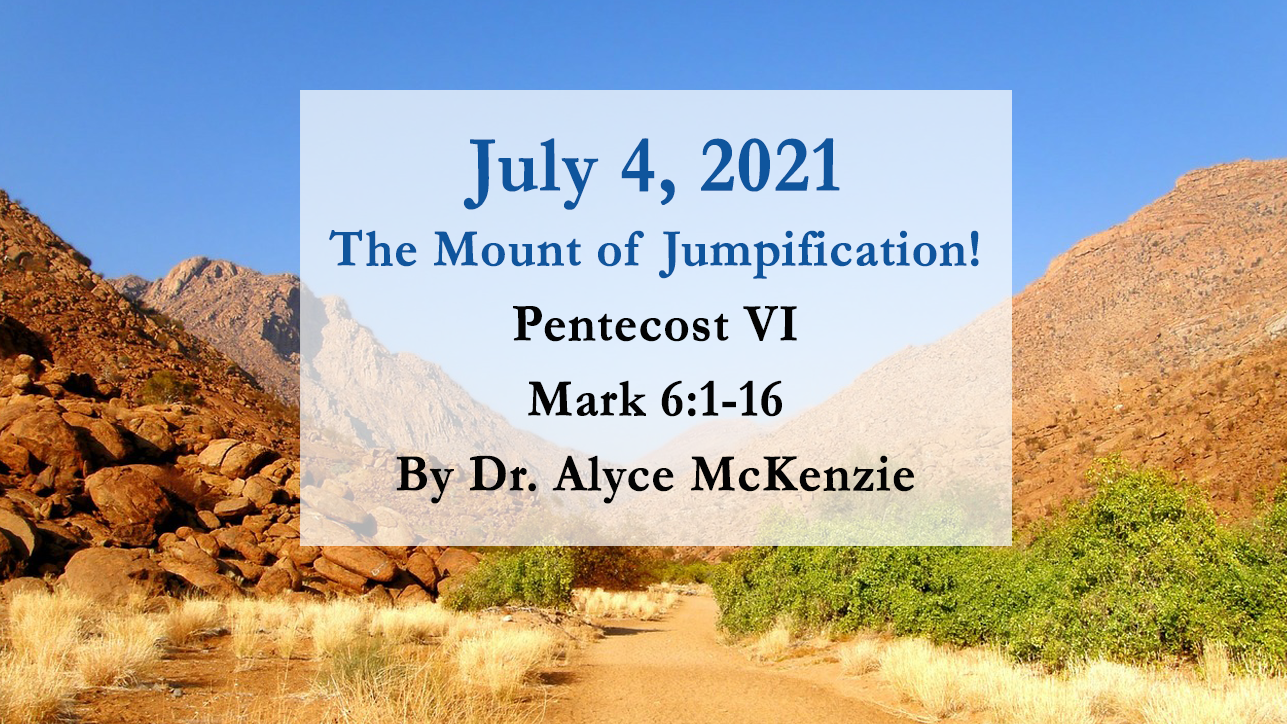 In C.S. Lewis' Chronicles of Narnia, Aslan, the Lion King of Narnia, represents a Christ figure. Lucy, conversing with Mr. Beaver, is curious about Aslan. She has never seen him, but has heard that he is "on the move," and anticipates meeting him. "Is he safe?" she asks.

"Who said anything about being safe?" said Mr. Beaver. "Course he's not safe, but he's good. He's the King I tell you."

Jesus is "on the move." Now here he is striding down the aisle of the synagogue.

Mark, with his usual taciturnity, simply tells us that "he began to teach." Luke 4:16-30 gives us a much fuller account of what he said, why they responded as they did, and what they then tried to do. Luke has him reading from Isaiah 61:1-2, strongly implying a Messianic identity, and then offering a litany of non-Jews who had more faith than his hometown congregation. No surprise that this lovely homecoming ends not with a strawberry festival in the grove, but, in Luke though not in Mark, with a mass attempt to hurl the hometown boy off a cliff. In Mark, the congregation takes offense at the fact that someone they know is “performing deeds of power” (Mark 6:2). In place of the over the cliff episode, Mark tells us that Jesus “could do no deed of power… except that he laid his hands on a few sick people and cured them. And he was amazed at their unbelief” (Mark 6:6).

Mark's account intrigues me as a student of human motivation. His hometown folks are, I would suspect, willing to give him the benefit of the doubt as long as he doesn't say anything unexpected or challenging. Their response to whatever it was he said reflects a combination of belief and incredulity. They seem to believe that what he said was of divine origin ("What is this wisdom that has been given to him?"), yet they are unable to believe that such a great gift would be given to someone they know and whose family they know.

I guess there is a reason that prophets are never honored in their hometown and among their own kin and in their own houses. As a parent of young adults, I try hard not to think of them as children. As a teacher, I try hard not to think of those I've taught as my perpetual students. I continue to learn a great deal from people I once raised and taught. Jesus’ hometown congregation, not so much!

There was once a young American who got a job as a tour guide for church groups from the U.S. touring the Holy Land. He would stand at the front of the bus with the microphone and point out the sights as the bus rolled through this town and that. He studied hard to learn every place name, every historical detail, and every geographical factoid. He wanted to be prepared for any and every question. He lived in fear of the question to which he would have no answer. One time, as the tour bus was going by Nazareth, he pointed out the window and said, "This may well be the hill from which the people of Nazareth in Luke chapter 4 tried to cast Jesus off." At this, an old Catholic priest who had seemed to be sleeping at the back of the bus, raised his head and asked, "What is it called?" The young man searched his memory wildly for a moment and then blurted out "It's called the 'Mount of Jumpification.’

Jesus is good but not safe. Not everyone wants to take the leap of faith to believe he is the Son of God and then to follow him along the hard and narrow path of discipleship depicted by Luke and Mark. Not everyone is willing to allow Jesus to work deeds of power through them (Mark 6:5). As Jesus warns the twelve, as he sends them out in the passage immediately after this one, not everyone will welcome and hear them (6:11).

We all have our own internal "Mount of Jumpification." Either we hurl Jesus over it or we follow him with a leap of faith.

The hometown boy is on the move. He is good but not safe. And he is coming to bring the message for the day and to send us forth to share it with others. The question is, are we ready to hear it and act on it?