The Manifest Dangers of Money - Reflections on Acts 16:9-15 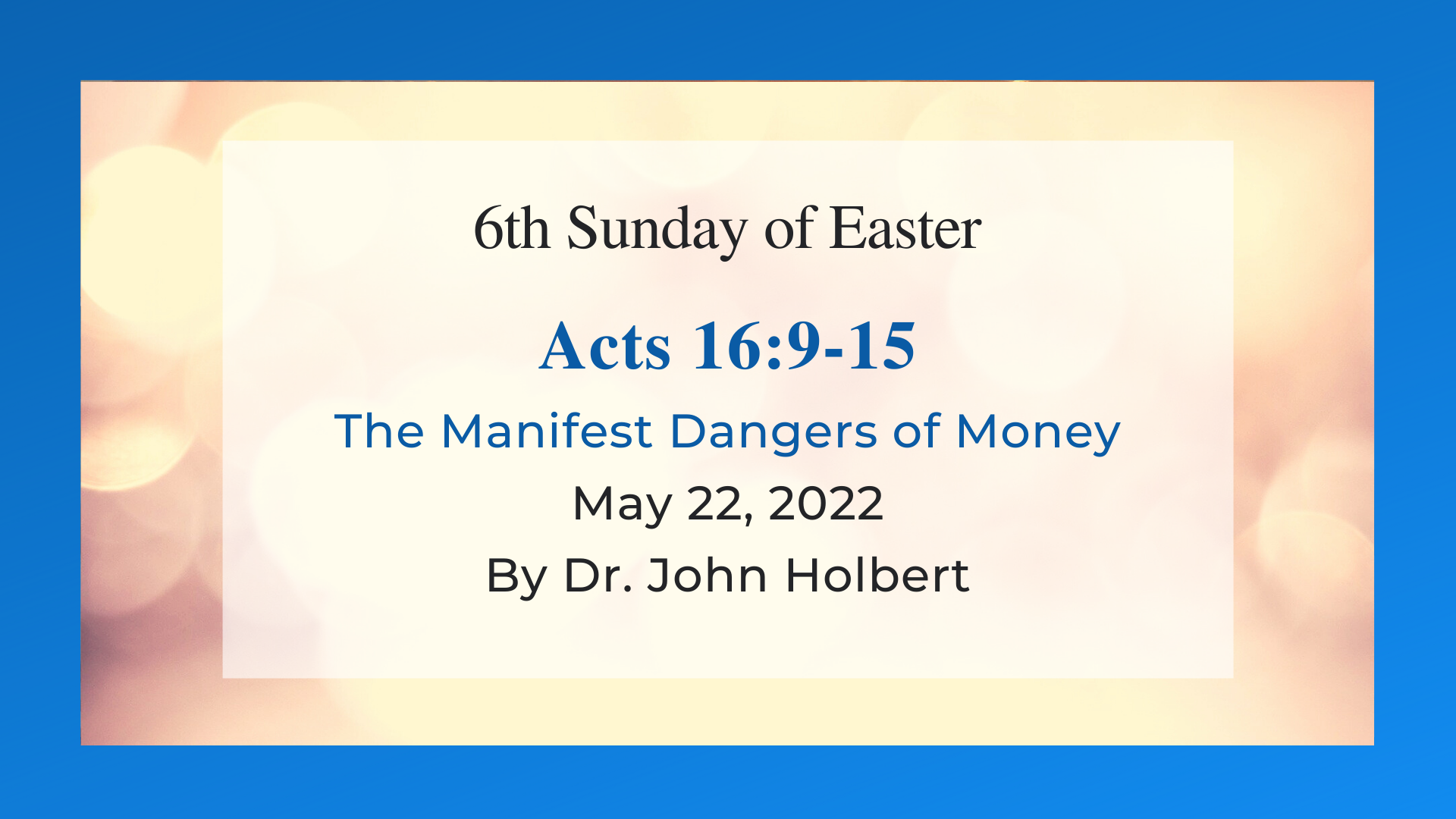 The Manifest Dangers of Money

It is a well-known fact that Luke’s Gospel and his 2nd volume Book of the Acts are, rather more than the other Gospels, quite concerned with the perils of wealth and its possible misuse. From the “widow’s mite” to Jesus’ fury at the temple’s money changers, over and again Luke warns us about money and its impediments to hearing clearly the message of salvation, offered first by Jesus and then by his earliest followers. The “rich ruler” for Luke becomes the very model of those who have a hard time hearing what Jesus has to say, precisely because they are rich, and as such, will find it difficult to “enter the realm of God” (Luke 18:25). Easier for a camel to squeeze through a needle’s eye, he says, than for a rich person to find her way into the rule of God. Indeed, in Luke’s “sermon on the plain,” unlike Matthew’s more famous sermon on the mount, Jesus pronounces a blessing on the poor (Luke 6:20), while also announcing “woe to you who are rich” (Luke 6:24). We well remember Matthew blessing those “poor in spirit,” but Luke speaks only of the poor who are blessed.

This central concern continues in the Acts of the Apostles. Paul in a vision is summoned to go to Macedonia, and thus begins his European mission in the Roman colony of Philippi. Such colonies were filled with ex-soldiers, who have been granted land for their service to the empire. As usual, Paul heads for the local synagogue as a place for his proclamation, but on the way, he encounters by a river a group of women. It has been said that these women are in fact Jews and that they themselves constitute a group of synagogue worshippers, perhaps suggesting that at least in some places of Jewish worship women were welcome. However, the text itself does not indicate clearly whether the women are Jews or not. What we do learn is that one of their number, a certain Lydia, is “devout,” a word that could either mean she is formally a Jew or was one of the “God-fearers,” Gentiles regularly mentioned in the New Testament, among whom missionaries often found ready converts to the new religion centered around Jesus.

What is certain about Lydia is that she is a woman with considerable wealth. This is clear for two stated reasons: she is a “purple-goods merchant,” and she is the mistress of a household of her own; no husband is mentioned. As a purveyor of the prized purple dyes and cloth, she deals primarily with wealthy and famous people in her community. Purple cloth was reserved mainly only for the rich (Luke 16:19) and for royalty (see 1 Macc.10:62 as an example). And her offer to Paul of open-ended hospitality in her house makes it plain that she has more than adequate resources to house Paul for as long as he needs. She is certainly open to the preaching of Paul and becomes thereby the first Christian convert in Europe.

With this conversion of a person of wealth, Luke wishes to demonstrate to his readers that Christianity attracted significant people to its ranks and was not merely attractive to the poor and marginalized, though no doubt many early adherents were those desperate for a sustainably safe community. Lydia’s rich tale leads Luke immediately to relate another story of a woman, this time one not herself rich, but instead one being abused for the purpose of making others rich. She is a Pythian Priestess, a person with some sort of magical power of prediction, exploited for her gift by her handlers. Paul, soon tiring of her crying out that he was a “servant of the highest God” (Acts 16:17), exorcises what he takes to be a demon from her, thus making her useless to those who were becoming wealthy through her wondrous prophecies. As a result, they drag Paul before the authorities, accusing him of being a Jew—thus playing on the long-time anti-Judaism of the Roman community—that brings about Paul’s rough treatment and imprisonment in the stocks.

Luke here reiterates earlier tales from his narrative. Peter confronted Ananias and Sapphira (Acts 5:1-11) and Bar-Jesus/Elymas (Acts 13:6-11), the former of whom misused their financial resources for their own gain, rather than sharing them with the community, resulting in their untimely deaths, and the latter of which waged a battle against demonic forces, a turf-war over who has rightly proclaimed the realm of God, Paul or his adversaries. The apostles are described again and again that they have the power to heal and exorcize, just as their master Jesus did.

But the problem of wealth is central here. Just as with Judas in the Gospel and with Ananias and Sapphira and with Simon Magus, the profit motive stands out. While Barnabas laid his goods at the feet of the apostles for the sake of the community, Ananias and Sapphira showed a negative example by their withholding of their goods for themselves (Acts 4:36-5:11). So here, Lydia’s wealth is expressed in openness to Paul’s entreaty, while the avaricious handlers of the Pythian woman symbolize their rejection of the apostles by dragging them to court because of losing “their hope for a profit” (Acts 16:19).

“The love of money is the root of all evil,” enjoins James, and too often his proverb is all too correct. I have long struggled with this call from Jesus to divest myself of wealth, so as not to be blinded by its pleasures, and thus diverted from the sharp and insistent call of the gospel to the simplicity of life—to live simply so that others may simply live. I admit shamefully that I am too much like the rich ruler, who upon hearing the call to wholeness and salvation, made more fully possible by the giving of my goods to and for the poor, “go away sad,” because I am in reality quite rich in this world. I can only say that this struggle goes on in my heart and life, and stories like these from Luke are like goads that urge me to keep the struggle going and not to succumb to the wiles of wealth, however many times I have failed this calling in my long Christian life.