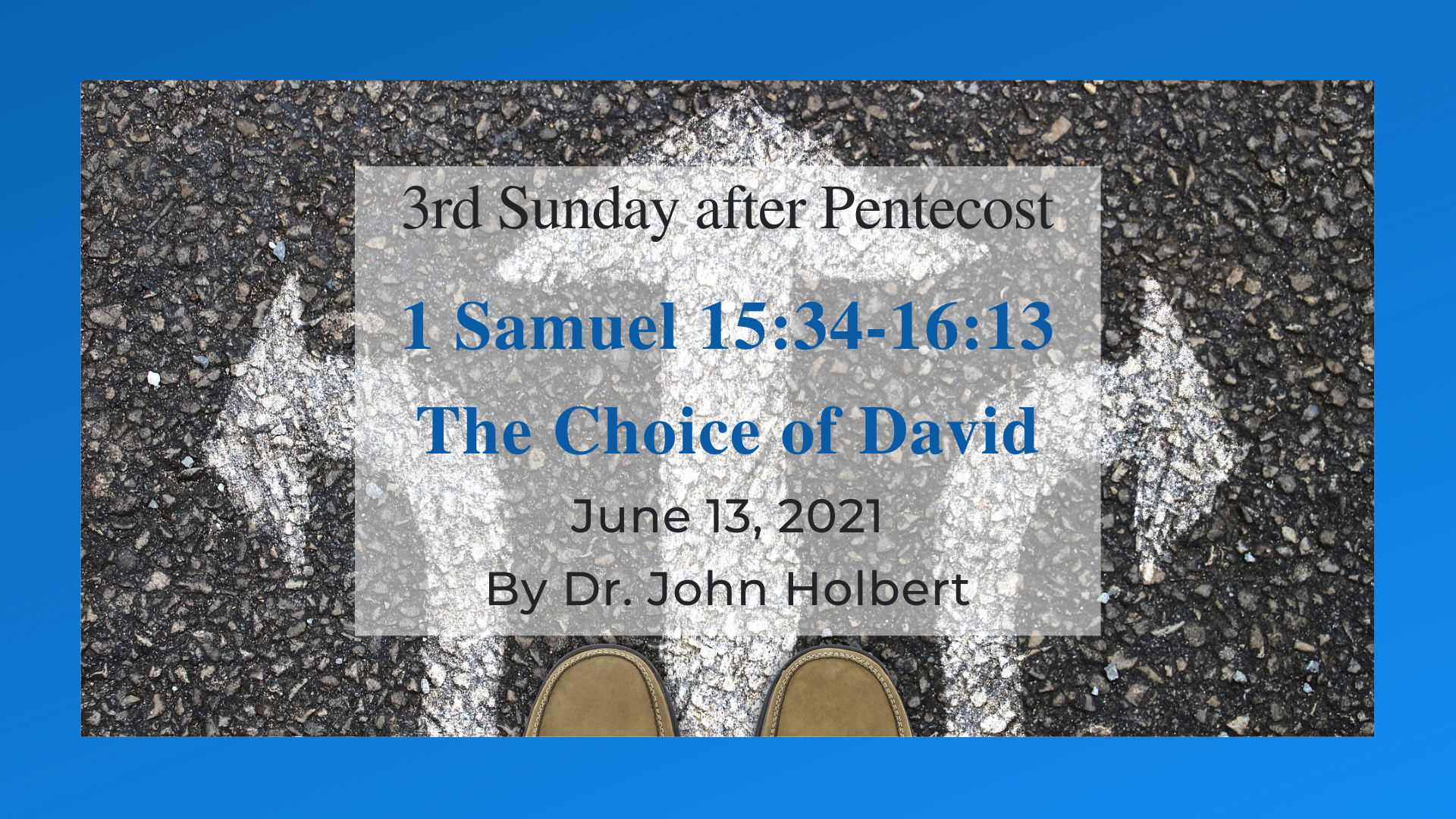 The Choice of David

As we move deeper into the tragic story of Samuel and Saul, we notice that Samuel’s hatred of the king he has chosen increases. In chapter 13, Samuel attacked Saul for a supposed usurpation of the sacrificial prerogative of Samuel alone. This angry reaction to Saul’s offering of sacrifice to YHWH was made despite Samuel’s own instructions demanding that Saul wait for him before sacrificing and his failure to show up in the time he designated (1 Sam.10:8). To top off Samuel’s fury, he claimed that YHWH had made the command, but a close reading of the command indicates clearly that it was Samuel alone who commanded, not YHWH. In this new story, Samuel discovers still another way to reject Saul as king, this time with an ambiguous command regarding total annihilation of the enemies of Israel.

The Hebrew word, cherem, does indeed mean complete and total obliteration of a defeated enemy. It is an appalling demand, and though there are few indications that Israel actually ever fulfilled the terrible requirement, cherem is mentioned numerous times in the literature. Its primary concern appears to be the necessity of destroying any and all who might serve as lures for Israel to turn away from the strict worship of YHWH. Samuel begins his demand to Saul by what appears to be the call to “obliterate” the Amalekites “for what they did in opposing the Israelites when they came upon out of Egypt” (1 Sam.15:2). This is a reference to the tiny tale to be found at Exodus 17:8-13 and reiterated in Deut. 25:17-19, where the attack against Israel in the wilderness is judged a “merciless”one. Because of that long memory, Samuel demands that Saul take ultimate vengeance on these desert people by destroying them root and branch, killing “both man and woman, child and infant, ox and sheep, camel and donkey” (1Sam.15:3). Saul musters an army and prepares to do precisely that.

After Saul’s rather easy victory over the Amalekites, he decides that rather than destroy them completely on the field of battle, he will instead complete the obliteration at a huge sacrificial event at Gilgal, including the burning of the king on the flaming altar. It is crucial to note that nowhere in Samuel’s command, and nowhere in the numerous instances of cherem, does it ever say that it must be accomplished on the battlefield. The fact is that the tale describes merely a difference of opinion between Samuel and Saul concerning how cherem is to be fulfilled. But, like the delay of sacrifice in chapter 13, it is only Samuel’s interpretation that counts, and thus when Samuel is confronted by Saul, dragging spotless sheep and the Amalekite king along with his army, Samuel explodes in rage and declares that YHWH has torn the kingdom of Israel from Saul and has “given it to your fellow who is better than you” (1 Sam.15:28), that man who will soon be revealed as David. It of course is supremely ironic to say that David, of all people, is “better” than Saul.

Samuel in this scene reduces Saul to an abject sinner, a wrenching claim that twice pours pitilessly from Saul’s own mouth (1 Sam.15:24, 29). And with that total rejection of Saul on Gilgal, Samuel heads to Bethlehem to find a replacement. He goes at YHWH’s instigation, comforted by YHWH’s own ruse that he is not king looking, but has merely come for sacrifice. Samuel goes after being told by YHWH to stop his “grieving over Saul” (1 Sam.16:1). This grief, of course, has nothing to do with sadness over Saul’s fate; it must be grieving over his horrid choice of Saul as king, horrid at least according to Samuel! Samuel soon demands that Jesse, a Bethlehemite farmer, accompany him to the high place on the farm for sacrifice and that all of his sons should come, too. Seven boys show up at the altar, and Samuel, looking each boy over, immediately decides that the eldest and tallest, Eliab, must be Israel’s next king. Nothing suggests that Samuel’s role as prophet is deeply compromised more than this snap choice. He has already chosen Israel’s tallest man, Saul, as its first king, and has just rejected him publicly. When asked to find another royal one, he just as quickly chooses the tallest man he sees! YHWH is forced by this choice to whisper to Samuel that he is mistaken in this choice, in effect saying, “No more tall guys!” “Humans see with the eyes and YHWH sees with the heart.” The traditional translation of this well-worn phrase “the Lord looks on the heart” is only one way to hear it. If my translation is chosen, then the claim is that YHWH uses God’s heart, God’s seat of understanding or insight, to make human choices.

In short, none of these strapping boys will do, says Samuel, after YHWH’s urgent prompting. Soon, David appears at the altar, fresh from his sheep-watching task, and the very first thing said about him is precisely a series of visual observations about his looks! “He was ruddy (red complected), with fine eyes, and goodly to look on” (1 Sam.16:12). Is it not grandly ironic that the very first thing the narrator offers us is a rich description of the ways that David looks? This occurs right after YHWH warns us directly “not to look on the outward appearance.” I would suggest that David’s uncommon beauty is going to bring a world of trouble in the stories still to come and that we humans are doomed to evaluate our fellow humans by the ways they look, not the ways that their hearts work. And it appears that though Samuel has been coached by YHWH not to look outwardly, he, as do we, falls right into that trap when confronted with the comely David.

Where does this story leave us? Israel is in deep trouble; Saul is still king in a certain sense but now Samuel, the prophetic meddler, has anointed another one, the youngest son of an unknown farmer on the fringe of the land. And the boy is stunningly handsome, is a fine musician, and an excellent handler of one particular weapon of war, the sling. Samuel continues to make life difficult for all he meets, and Israel is on the verge of a painfully unsettled time. Stay tuned!