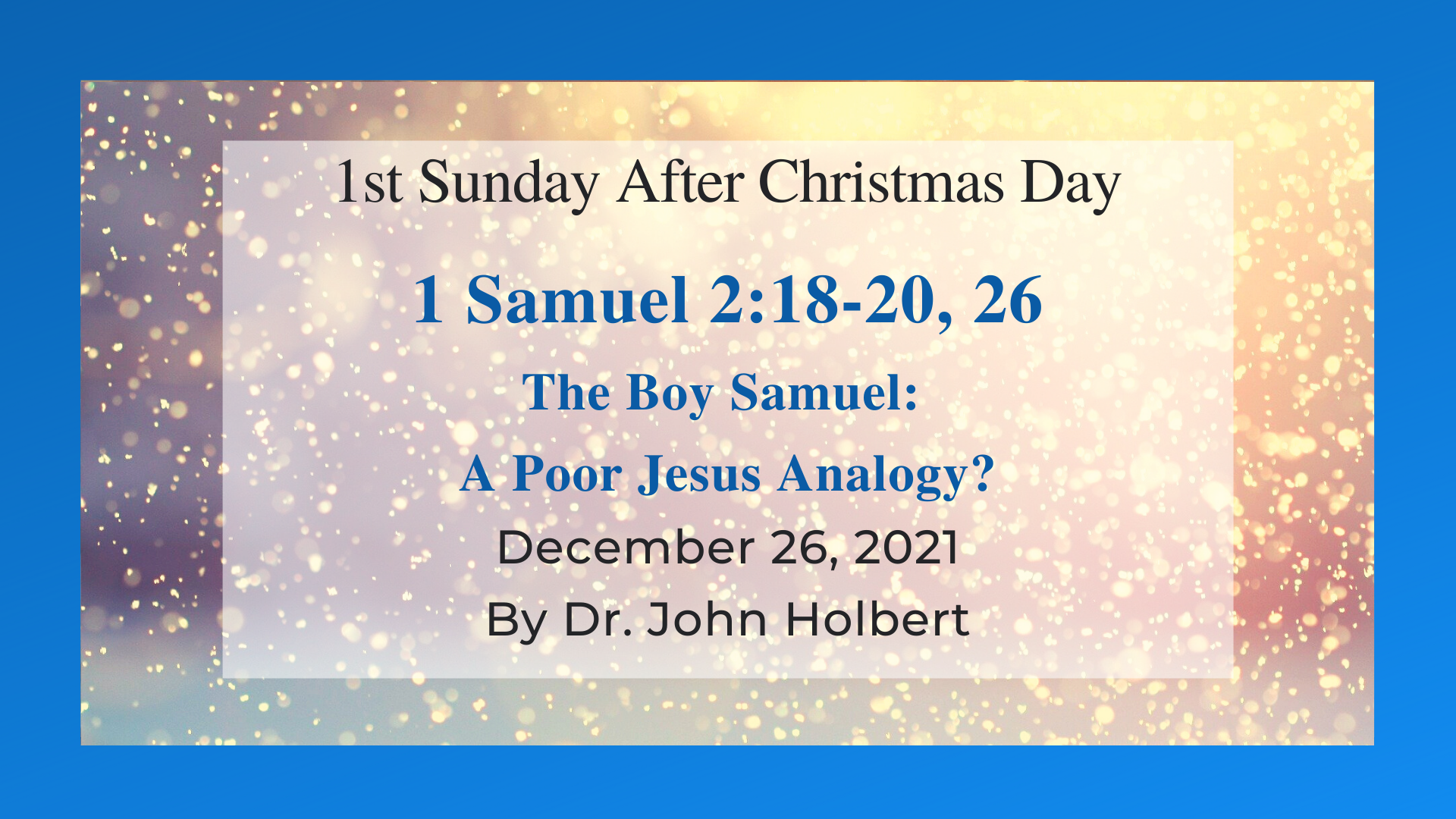 It is more than obvious why this passage from 1 Samuel is regularly chosen by the collectors of the lectionary to suggest the analogy between the service and growth of the child Samuel in the temple, and the apparently similar early life of the child Jesus. The Gospel of Luke points directly to the similarities in Luke 2:40: “The child (Jesus) grew and became strong, filled with wisdom; and the favor of God was upon him.” Compare that portrayal with the words of 1 Samuel 2:26: “The boy Samuel continued to grow both in stature and in favor with YHWH and the people.” Both the prophet Samuel and the child Jesus “grow” and gain the “favor of God.” In the ancient prophet Samuel, claims Luke, we are to see the rising of a new and favored prophet in Israel, namely the child Jesus.

I must say that I find this analogy between Samuel and Jesus only about half right: yes, they both are children from deeply religious parents, or at least in Samuel’s case a deeply religious mother, Hannah—Elkanah, her husband is not depicted as especially religious. And both are in certain ways described as connected to a temple: for Samuel, he is given in service to the temple in Shiloh in fulfillment of the vow made by his mother. In Jesus’s case, according to the Gospel of Luke, Jesus goes to the Jerusalem temple on his own and wows the teachers there with his precocious wisdom (Luke 2:41-52). Jesus states famously to his frantic parents, who have lost their son for three full days (!), “Did you not know that I must be in my father’s house,” a phrase that might also be translated as “be about my father’s interests”? In response to this reply to their anxious questions, “His mother (Mary) treasured all these things in her heart” (Luke 2:51). No response from Jesus’s father is recorded, though one might imagine that the apparent carpenter, Joseph, might have been preparing a wooden stick for punishment!

After Samuel has been dropped in the Shiloh temple by his obedient mother, we are told that he was “ministering in YHWH’s presence, a boy wearing a linen ephod” (1 Sam.2:18). Samuel, under the mentoring of the doddering, ancient priest, Eli, has been assigned the task of regular priestly duties, and his slight garment, an ephod of linen, is an apparent sign of his role in the temple. This garment is mentioned throughout the Hebrew Bible, most notably in the 2nd book of Samuel, where King David is said to be wearing an ephod when he leads the great procession before the Ark of the Covenant up to Jerusalem, now known as the City of David. This ephod is clearly a rather skimpy bit of clothing, barely covering the king’s privates, since his estranged first wife, Michal, accuses her husband of “revealing himself to the serving maids,” and thus bringing shame on the royal household. David replies that his dancing, and its accompanying revealing, “was for YHWH,” and had nothing whatever to do with lewd behavior. Still, however one is to understand David’s wild actions, the ephod he is wearing is rather like an ancient g-string at best.

Little wonder that Hannah, each year that her son is serving in the temple, “makes for him a little robe,” and brings it to Samuel when she and Elkanah return to Shiloh for the yearly sacrifice (1 Sam.2:19). That tiny ephod would do little to protect the boy from the winter winds that howled regularly at the high place of Shiloh. Each time that Hannah would greet Samuel, and hand him his latest gift of the robe, Eli would “bless Elkanah and his wife,” and would ask that YHWH grant them more children as a result of Hannah’s gift of Samuel to the temple. And Hannah proceeded to bear three more sons and two daughters (1 Sam.2:21).

To me, that tender scene ends the analogy between Samuel and Jesus. While the latter prophet goes about his world-changing ministry, culminating with his gift of himself on the cross, Samuel becomes increasingly confused about his call from YHWH, whether that means he is to be faithful to YHWH’s call exclusively, or whether his own desires for a dynasty by means of his monstrous children finally takes precedence (1 Sam.8:3; 12:2). Jesus selflessly offers life and ministry to all he meets, while Samuel fails to differentiate between what God wants and what he wants. Jesus becomes the light of the world, while Samuel becomes merely another prophet more concerned about his own desires than the desires of his God. We Christians are called to follow this Jesus in service and self-giving, not some would-be prophet who cares more for himself and his success than for the service of others. It is crucial to read the whole story of Samuel before we find in him some appropriate analogy to the one we call savior and Lord. Both may have grown up in religious places, both may have increased in strength and in favor with God, but only Jesus of the two turned his back on his own welfare and gave himself for others. Both offer models to us, but the model of Jesus is the one we are called to emulate, not the model of Samuel, who began well but ended up only a dangerous and unfit so-called servant of God.

I am well aware that my reading of the life of the prophet Samuel is not the traditionally accepted one, but I insist that a very careful reading of the actual words of 1 Samuel will yield the portrait of the man that I have suggested. If you would like further evidence of this reading, I direct you to my 2015 novel, King Saul, still available from Wipf and Stock Press. There in a fictionalized form, you may find further evidence that Samuel was far less than a true man of YHWH, as he is usually described. I might also point you musicians to an opera by Carl Nielsen, “Saul and David,” that sees Samuel in a surprisingly similar vein.