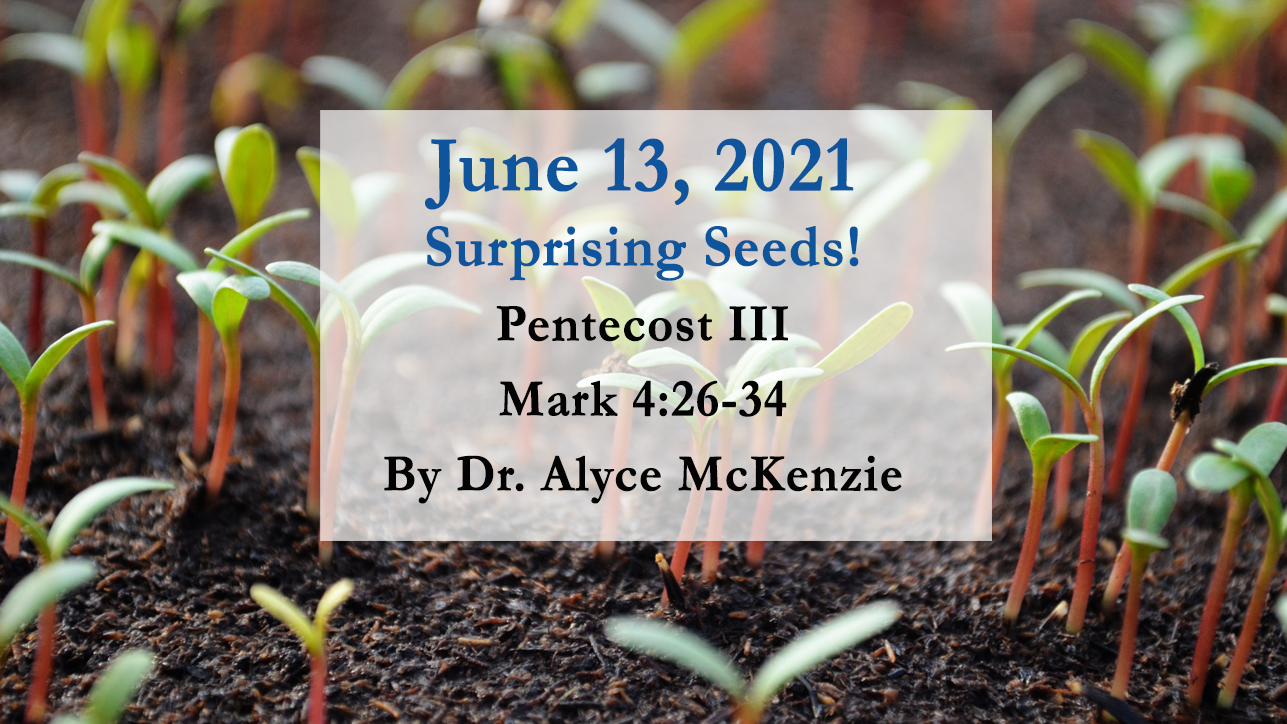 Mark's gospel was written around 70 C.E., shortly after the Romans destroyed the temple in Jerusalem. Those who professed the Christian faith faced destruction and feared their efforts were paltry and futile. Mark wrote at about the time of the First Jewish War (66-70 C.E.) toward the end of the reign of Emperor Nero (54-68 C.E.).(Thurston, Preaching Mark, 3) In those tough times, speculation about the in-breaking of the kingdom soared. Mark 13 alludes to war and the destruction of the Temple in Jerusalem. Mark's Gospel (13:23) shares with Matthew's Gospel (24:36-44) an emphasis on the need for alertness since the kingdom—ushered in by the Son of Man—would come at a time we do not expect.

Parables paint scenes from the natural world, but always with a strange twist or incongruous detail. They are, to quote C.H. Dodd's definition, "realistic, yet strange." The seed images are familiar. They tell us that the kingdom is near and breaking into the ordinary world where we dwell. The images also have a strangeness or improbability in them. Given the adversity that faces it, the harvest is too great in Mark 4:8. The mustard bush is a strangely diminutive metaphor for the traditional picture of the kingdom of God.

As opposed to the pomp and puffed-up power favored by the empires of the world, Mark uses seed metaphors to help us discern God's presence and work (kingdom or reign) in small, surprising places.

The parable of the growing seed

Mark uses Jesus' parable of the growing seed (Mark 4:26-29) to comfort those in charge of guiding his endangered church. Mark's gospel was written in a time of high anxiety. Church leaders felt vulnerable and helpless. We can see why seed parables, while present in all three synoptic gospels, are particularly prominent in Mark.

Seeds are small and vulnerable but can sprout and grow even in tough times. Seeds are a good image for a mysterious reality whose growth occurs without our instigation and often without our knowledge.

A friend told me about her young son who was doing a science project in his elementary school class. He planted several seeds and was supposed to monitor how quickly they grew. A problem arose, however. Seeds don't grow when little hands dig them up every day to see how they're doing. The parable of the growing seeds encourages us to have faith and patience as the seed does what seeds do.

The parable of the mustard seed

In the parable of the mustard seed (Mark 4:30-32; Matthew 13; 31-32; Luke 13:19), the smallness of the mustard seed—characterized as the smallest of all seeds—is contrasted with the size of the final tree. A scruffy shrub seems like an odd choice as a metaphor for God's kingdom when one could have chosen a magnificent cedar. The fact is that the mustard seed doesn't really grow into a tree but a large bush. This extravagant detail is meant to remind us of the kingdom of God. While it has small beginnings, the results are surprising.

The phrase "the birds of the air nested in its branches (or shade)" connects this parable with several Old Testament passages where trees are used as metaphors for nations. Israel is depicted as a noble cedar in Ezekiel 17:22-24—"In the shade of its branches will nest winged creatures of every kind" (v. 23). Assyria (Ezekiel 31:6) and Babylonia (Daniel 4:12) are both portrayed using the metaphor of a cedar tree. They are lofty and proud, but pride will lead to their downfall. (Donahue, 37)

Jesus' parables call his audience to expect the in-breaking of God's reign into our ordinary daily lives. They also call us to remember that the kingdom of God has its own time and rate of growth. They call us, in John R. Donahue's words, "to look beyond what we see to what we hope for."(Donahue, 38)

We 21st-century types want our lives to be full of successes and significance. Jesus calls on us to have more patience with and respect for failure, hiddenness, and insignificance. For they can point beyond themselves toward the reality of the kingdom of God already in our midst.