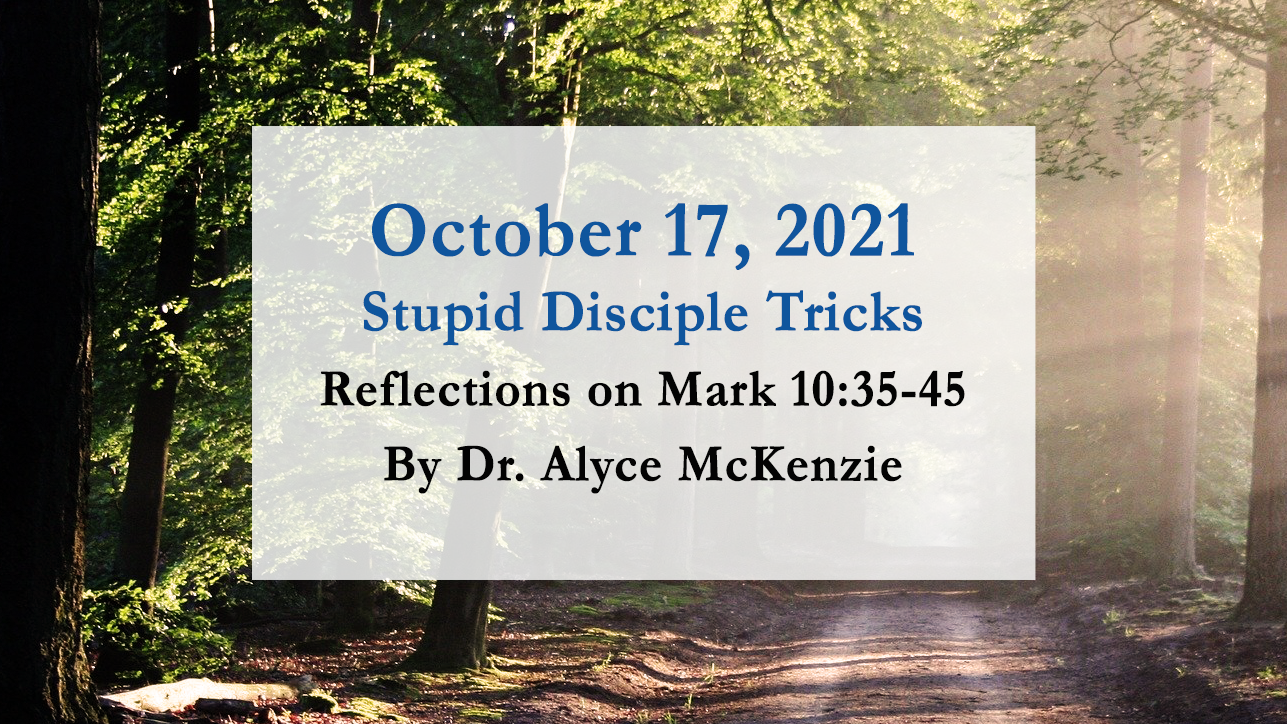 There was a prayer that my mother taught my children when they were young that goes like this:

Matthew, Mark, Luke and John,
Watch the bed I lie upon:
Four corners to my bed,
Four angels there to spread,
One at head and one at feet,
Two to guard me to Heaven's gate:
One to sing and two to pray,
And one to fetch my soul away.

In tracking down this prayer, I found that it is a medieval bedtime prayer (The Wrong Plantagenet, by Marian Palmer, p. 28).

It is a beautiful depiction of the guidance of the four evangelists for a child on the verge of sleep. I appreciate all of them, each with their differing depictions of the twelve disciples. But if it comes to choosing which disciples I'd want fetching my soul away, Mark would be my last choice.

By now it is a cliché that the disciples of Mark's Gospel should be more accurately labeled the "duh-ciples." They could have their own reality show called "Stupid Disciple Tricks." In Mark they just never get it. In Matthew, Jesus has a pet name for the disciples: "little faith ones." He uses it in the Beatitudes (Mt. 6:30) in challenging their anxiety. He uses it to question Peter's doubt when he is distracted by the strong winds while walking toward Jesus on the water (Mt. 14:22-33). He uses it to question the disciples' panic when they experience a storm at sea (Mt. 8:26).

In Mark 4 there is the parallel version of the Matthean storm story that appears in Matthew 8. But in Mark's version Jesus doesn't say "little faith ones." Instead, he demands, "Have you still no faith?" (Mk. 4:40). In Matthew, the disciples have a little bit of faith that can grow. The result being, when they face the next situation in which anxiety, doubt, or panic are natural responses, they can act with a little more faith and the next time, even more.

But in Mark, the prognosis is not so positive. In Mark the disciples are timid, perplexed, and inept, and they remain so. I'm not sure I'd pick them to lead my soul anywhere.

It's only fair to set Mark's disciples' behavior in a synoptic context. Then we find that they aren't alone in their missteps and misguided priorities.

Demanding the best seats in the house. A prime example is in our gospel lectionary text for this week from Mark 10:35-45. Two of the disciples demand the best seats in the house out of an arrogant presumption that they deserve special treatment. To be fair, the disciples of Matthew show up in the same scene in their gospel. In Matthew, the mother of James and John drags her boys in by the ear to ask Jesus for the best seats (Mt. 20:20-28). In Mark they come on their own (Mk. 10:35-45). In both, Jesus uses the incident as a teaching moment on the meaning of true greatness and the need for disciples to model themselves on the Son of Man's motives and mission.

Intimidating small children. In all three synoptic gospels the disciples sternly order people bringing children to Jesus to back off (Mk. 10:13; Mt. 19:13; Lk. 18:15).

Failing to understand. In both Matthew (15:16) and Mark (7:18) the disciples do not understand Jesus' teachings about what defiles (what comes out of the mouth, not what goes in). There is a subtle difference in what Jesus expects of them though. In response to their request to explain his teaching in Matthew he asks: "Are you also still without understanding?" In Mark he asks, "Do you also fail to understand?" It's as if Matthew's Jesus has higher expectations of the disciples.

If I were a child lying in bed hearing the lovely prayer, "Matthew, Mark, Luke, and John watch the bed I life upon," I'd want the disciples of Matthew to guide me, not Mark. Because they at least have a little faith.

The Unique Obtuseness of Mark's Disciples

The two lead disciples in Mark 10:35-45 have a problem with spiritual arrogance. I believe there would be some hope for them if they would acknowledge their problem, pray, not be afraid to ask Jesus for strength and wisdom, and open their hearts to him.

But that is not what happens in Mark's gospel.

They forget to pray. In the story of the boy with the unclean spirit, Matthew's Jesus tells them they couldn't cast it out because they only had a little faith. Mark's Jesus says it is because they forgot to pray (Mt. 17:14-21; Mk. 9:29).

Their hearts are hardened. In Mark 6:52, we learn that the disciples did not understand about the loaves, and that "their hearts were hardened." We're told that again in Mark 8:17. That, apparently, was why they did not recognize Jesus walking toward them on the water. This idea of sense organs that do not function is a natural way of describing people's lack of spiritual awareness. The reference is probably to Isaiah 6:9-10. Jesus charges his disciples with being no better off than his opponents who opposed healing on the Sabbath in 3:5. Their privileged insight into the secret of the kingdom of God seems to have deserted them (R.T. France, The Gospel of Mark, 317).

In explaining to the disciples the meaning of the multiplication of the loaves and fish, Jesus in Matthew addresses them as "little faith ones," and asks, "Do you still not perceive?" In Mark's version, Jesus doesn't use the pet name and adds the question, "Are your hearts hardened?" (Mt. 16:8, 9; Mk. 8:17).

They fall silent when called on the carpet. Immediately following Jesus' foretelling of his passion comes a teaching about who is greatest in the kingdom. Matthew (18:1-5) has Jesus simply launch into this teaching. Mark (9:33f) and Luke (9:46f) set it in the framework of the disciples arguing about who is the greatest. Mark adds the detail that, faced with the question, the disciples fall silent. Their timidity seems childish on this and other occasions, not child-like.

There is a Native American story about the two dogs. A young brave goes to an elder and says, "I'm in turmoil. My heart is filled with good and with bad." The elder says, "Two dogs live within the heart. One is good and the other is evil." "How do I know which one will win?" asks the young man. "The one you feed will win," replies the older, wiser man.

Within our hearts are both humility and arrogance, respect for others and a desire to outshine them, a desire to serve and a craving to be served. The one you feed wins. How do we feed the humility and spirit of service Jesus holds up as the model for discipleship in this passage from 10:35-45? Do what the disciples in Mark don't do; in every situation, repent, pray, and ask for wisdom and guidance. I think Mark meant the disciples to serve as a cautionary tale for his community. Given that job description, we can only congratulate them on the fine job they're doing!