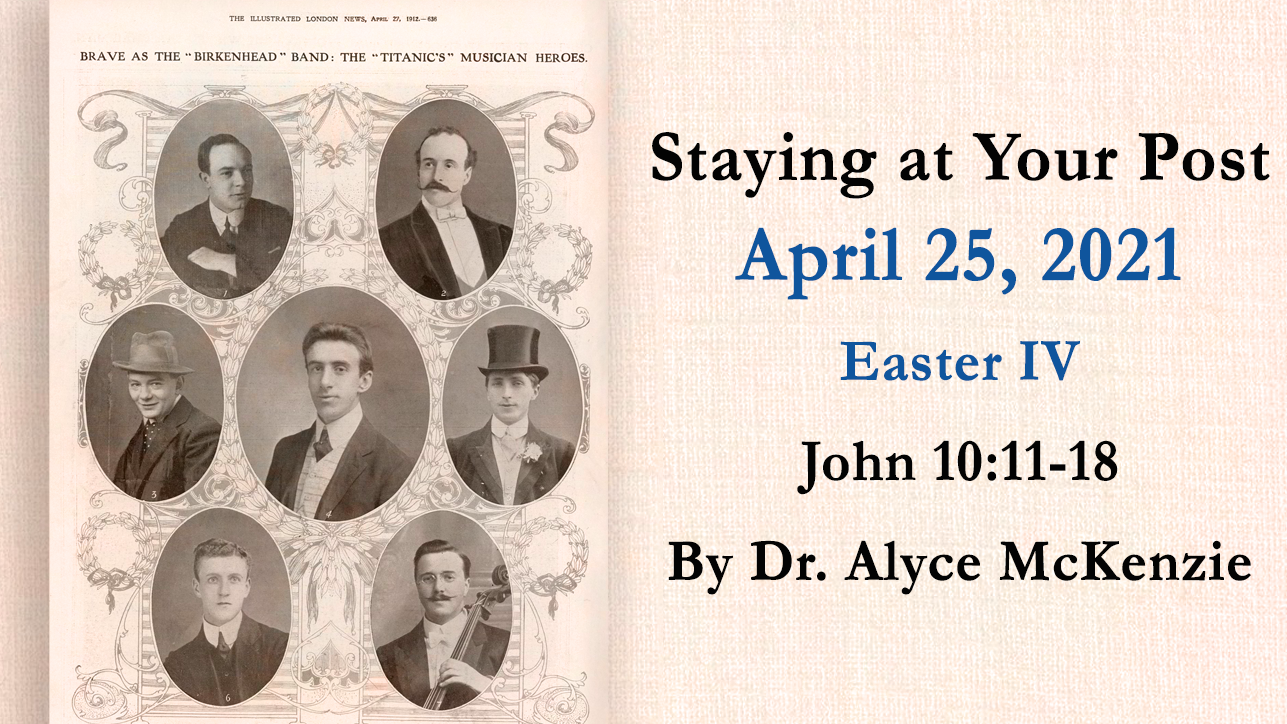 One hundred years ago the ship that, as legend had it, "God himself couldn't sink," struck an iceberg in the North Atlantic. It was about 20 minutes to midnight on April 14, 1912. Two hours and 40 minutes later, the Titanic was gone.

More than 1,500 people died that night. One of them was Wallace Hartley, the son of a church choirmaster in England. He had left work as a bank teller for a career in music. Hartley conducted and played violin, and he worked some 80 maritime voyages before joining the Titanic as bandmaster.

In the book Titanic Tragedy: A New Look at the Lost Liner, historian John Maxtone-Graham describes the 33-year-old Hartley as so dapper and hip to new music that he used the name "Hotley" in his wireless messages.

"Whenever he went to New York, he didn't go to the oyster houses or taverns that his fellow crewmen went to," Maxtone-Graham says. "He went to Tin Pan Alley looking for sheet music because he was hipped on getting the latest possible music to play for his passengers."

Hartley and his musicians became the stuff of legend as the Titanic was sinking, because they kept playing.

Like many of the details from that night, accounts of that episode vary. As Maxtone-Graham tells it, they played inside at first, then moved outdoors, "where there was no piano, no light, no chairs, no music stands, and played on that cold outer deck." (http://www.npr.org/2012/04/13/150514628/remembering-the-titanics-intrepid-bandleader)

This passage from John 10:11-18 offers a picture of the Good Shepherd of the flock. It is one of seven “I am” sayings in the gospel of John, monologues in which Jesus reveals his identity to his followers. The other six are Bread of Life (6:35), Light of the world (8:12), Gate (10:9), Resurrection and Life (11:25), Way, Truth and Life (14:6) and True Vine (15:1). They cover the spectrum of human need and divine provision. We all need nourishment, light, a gate to access a path, and a leader to lead us to life. We need a good shepherd.

John’s audience would have been familiar with the notion of the Good Shepherd because it was the portrait of who the king should be in the history of the Israelite people. In Israel’s history, the king, in ruling the land, was to embody the attributes of God.  His duty was to act out of concern for justice for the poor, to be a shepherd who looked out for the rights and needs of the widow and the orphan, the most vulnerable of the flock. The king was to reflect the care of God envisioned so beautifully in Psalm 23 “The Lord is my (our) shepherd.”

Jeremiah and Ezekiel repeatedly condemn the leaders of the nation for being bad shepherds. They insist that it is because of their greed and neglect that the nation has been scattered. “Woe to the shepherds who destroy and scatter the sheep of my pasture!” says the Lord. (Jeremiah 23:1)

When, in the events of the exile and dispersion, Israel no longer had historical kings, the job description of good shepherd was transferred to the messianic ruler who would usher in the new order of God and restore justice to the land.

As Christians, we believe that One has come and that we are to live in such a way that we mirror his way of being in the world.  Every Christian is called to be a shepherd. We each have a sphere of influence, even if we don’t think of ourselves as public figures. We may not all be called to dramatic situations in which our physical lives are on the line. But there is the less dramatic, daily sacrifice we make when we allow the Good Shepherd to guide us in offering guidance and nurture to those around us. That means being vigilant to all that would threaten our flock and not abandoning our post in trying times.

The story of Wallace Henry Hartley is so moving because, in a situation in which death was imminent and certain, he did not abandon his post.

What was the band playing in those final moments? Their final song has been much debated. The hymn "Nearer, My God, To Thee" was long a favorite. The Titanic chronicler, Walter Lord, originally thought it was another hymn, "Autumn." Maxtone-Graham says Lord later came to believe it was actually a waltz with a similar name.

"Thanks to Walter Lord, I think the real last tune they played was a little bittersweet waltz by Archibald Joyce," Maxtone-Graham says. "He gave it a French name, as many Edwardian creative people did. They thought if they made it French it would be a little more elegant, so he called it 'Songe d'Automne' — thoughts, or dreams, of autumn."

Whatever that final song, Maxton-Graham has come to think of Wallace Hartley, in those final hours on the Titanic, as a minister tending his flock. Encouraging them to continue playing focused their minds on the beauty of the music at the same time that it calmed others.

"His flock were those musicians," he says. "Hartley was taking care of their spiritual needs near the end of their lives by giving them a job they could do to fill the time. My conviction is it gave as much comfort to the men who were playing as to the people who heard them."(http://www.npr.org/2012/04/13/150514628/remembering-the-titanics-intrepid-bandleader)