Shalom Without End - Reflections on Isaiah 7:2-7 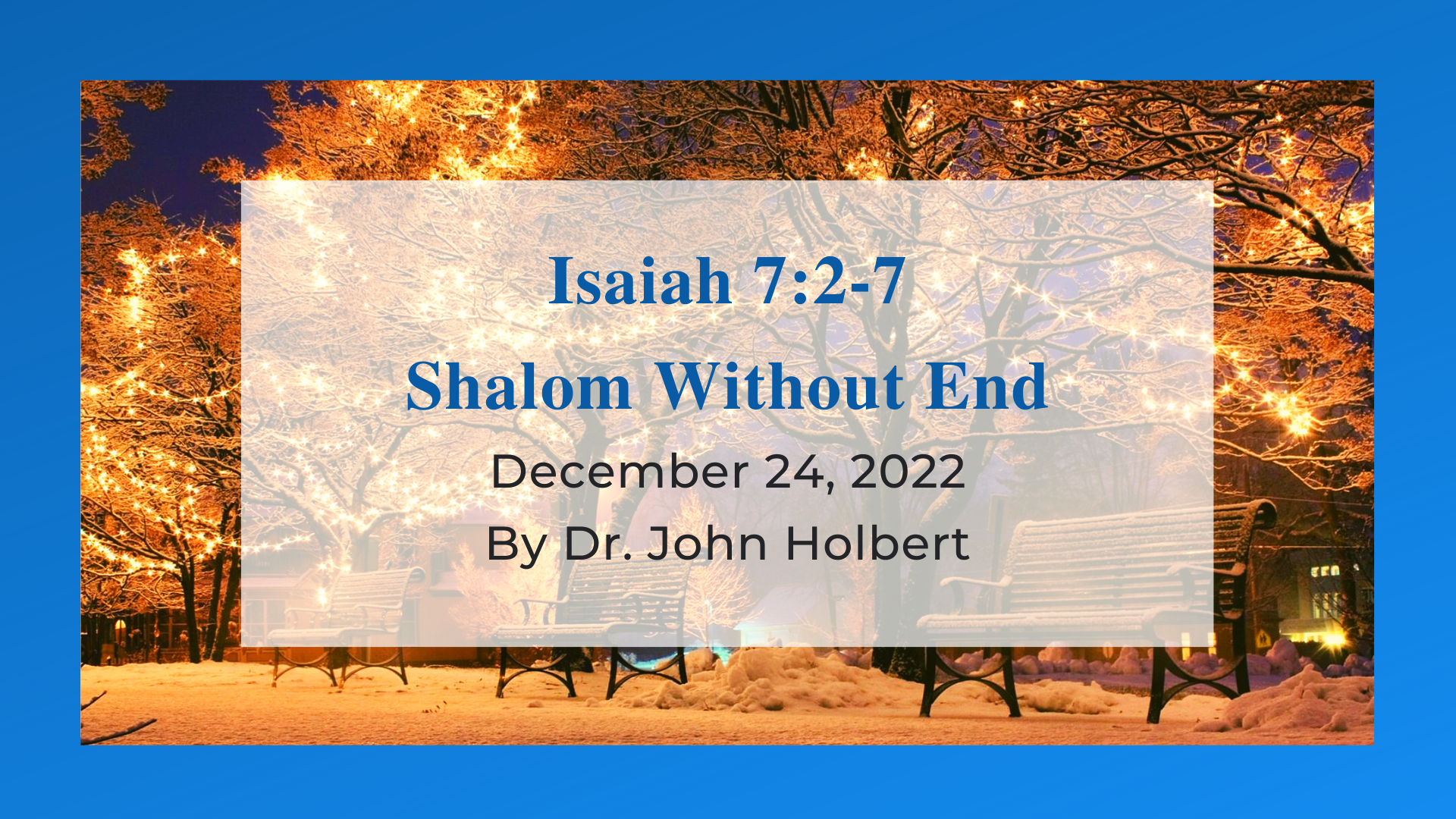 It is noteworthy that nearly all of the Isaiah texts for Advent, 2022, are taken from passages that were almost certainly not written by the 8th century BCE Isaiah, but were composed by later followers of the prophet, disciples who continued to hope mightily that the warfare and bloodshed that continued almost without stopping from that first Isaiah’s lifetime right on down to the lifetimes of the authors of the grand visions now encased within the confines of the long Isaianic book. The only one of the texts that may be attributed to 8th century Isaiah is Is.7, since its historical context in the Syro-Ephraimitic war of 734-32BCE, includes the prophetic time of Isaiah. Even then, of course, the important claim of the so-called “virginal birth” mentioned in 7:14—though as I argued in my essay on that text, a virgin is not mentioned in that famous line, despite Matthew’s later use of it—has very little to do with the apparent 8th-century purpose of the text, namely to tell Ahaz that his great fear of two contemporary kings is largely unfounded since YHWH has already determined to take care of them.

The other three texts the lectionary provides, as well as the one for this Nativity of the Lord, are each one a grand vision of a future characterized most particularly by shalom, a famous Hebrew word usually rendered “peace.” But the word means far more than the end of conflict, a conclusion of warfare. The basic import of shalom has to do with unity, wholeness, a return to full and rich community after a period of fracture. What all the texts of 2022’s Advent major in is a new sense of integrity, a continuity of the world of God that includes all God’s creatures, both human and animal. The coming of the Christ child, say these texts, will remind us again that God’s plan for our world is finally shalom, not nation-states, not countries rich and poor, not peoples struggling for survival while a few others live in vast luxury. The promise of Jesus is the promise of shalom, nothing more, nothing less.

Just how is it that we US Americans, and increasingly our Christian European and Asian brothers and sisters, have created something quite different for the celebration of Christmas? Instead of shalom, we celebrate consumption. Instead of shalom, we celebrate excess. Instead of shalom, we celebrate gluttonous feasts, gaudy light displays, treacly songs about rockin’ Christmas, Mama kissin’ Santa Claus, and Santa Baby. The answer to this yearly travesty of the season may be found in that need for money, that capitalistic crawling after the almighty dollar, rather than the almighty God. Once Santa first hoisted that bottle of Coke, now well over 100 years ago, the hope for shalom devolved into a hope for the perfect table, the superb pie, the most exciting football game, experienced prone on the couch, satiated by that best of all possible meals, topped off with that coke or perhaps something a bit stronger.

Yes, this is in fact a plea to “put Christ back in Christmas!” I admit to hating that phrase for many of my 52 years of ordination, hearing in it a fundamentalist cry for “that ole’ time religion,” a screech from a tear-stained pulpit for a return to the “good old days of church,” which I regularly said was far more old than good. And I still say such things,  but I have now come to the conclusion that runaway consumerism has become the death knell of Christmas, the C-major ending chord of shalom. It is clear to me now that one simply cannot have the promised shalom of Christmas at the same time that one pursues the glut of gifts, the surfeit of stuffing, the plethora of presents. If shalom means “unity,” and it does, and if the coming of Jesus at Bethlehem offers shalom to the world, and it does, then we have got to find a way to celebrate shalom this year rather than the Christmases we have witnessed over most of our lifetimes.

For many of us privileged ones, such a message is bad news indeed, and it certainly is bad news for the merchants, who derive a huge portion of their yearly earnings from this season. I get all that. But it just might be that the capitalist lust is in the end incompatible with the search for shalom. Or if not incompatible, it at least calls into serious question the whole “Christmas thing,” the bells, and hymns, and trumpets, and choirs, and trees, and presents, etc. Each year, as I watch another football game (oh, yes, I do watch that most violent of sports), those Lexus commercials, where the lovely family rushes out of their beautiful houses to discover a brand new Lexus sitting in their driveway with a big red bow on it, I am sickened all over again, knowing full well that my family could never afford one of those cars in a million years, and that 95% of those watching the same game could not afford one either. And just why should we want to afford one? This is what our US American Christmases have become, squeals of delight by beautiful actors, conjuring up fake joy over a very expensive automobile.

I want shalom instead of a Lexus. I want unity and wholeness of humanity rather than another fabulous car. Help me, O God, to seek shalom in the Christ child this year. Help me to seek justice and righteousness, not food and fantasy. Christmas is about shalom, so may we all seek shalom this and every year.