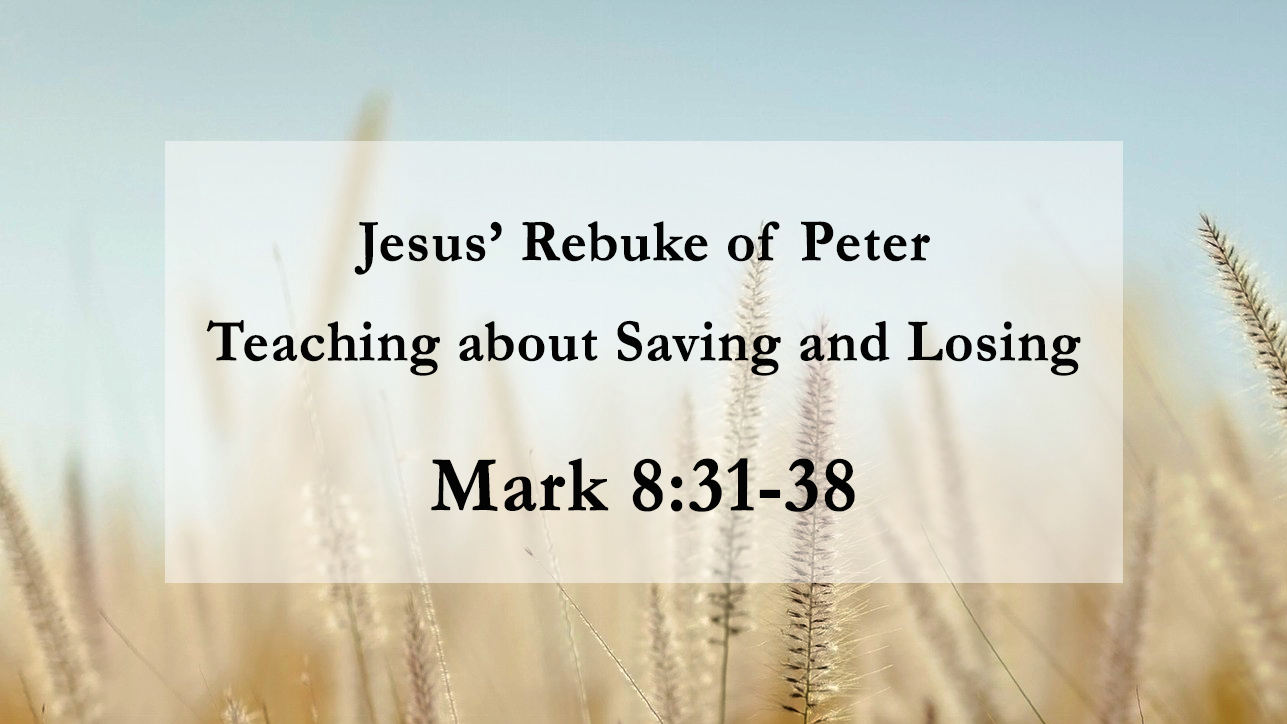 Jesus’ Rebuke of Peter / Teaching about Saving and Losing

All three synoptic gospels include accounts of Peter’s declaration of Jesus as Messiah followed by Jesus’ warning not to spread the word, foretelling his coming death and resurrection, and offering teaching about cross-bearing. (Matthew 16:13-27; Luke 9:18-27; Mark 8:27-38). Mark and Matthew include Peter protesting Jesus’ prediction and Jesus rebuking him. Luke omits the rebuke of Peter. Matthew adds details about Peter receiving keys and being the Rock. Mark adds the detail that Jesus “said this quite openly” (Mark 8:32).

It’s tempting to criticize Peter for rebuking Jesus. But in his defense, Jesus’ teaching has just taken a new and disturbing direction. Mary Ann Beavis, in her Commentary on Mark, points out that “The meaning of Messiah was fluid in first-century Judaism, but it did not include a suffering, dying and rising figure.” This passage in Mark is a “blunt reminder to Mark’s first-century audience that following Jesus includes the way of the cross.”  (133-34). (Paideia Commentaries on the New Testament: Mark. Grand Rapids, Michigan: Baker Academic, 2011).

Having put Peter (Satan) in his place, Jesus embarks on teaching that is crucial to his identity and that of those who would be disciples. “For those who want to save their life will lose it, and those who lose their life for my sake, and for the sake of the gospel will save it” (Mark 8:35; Matthew 16:25; Luke 17:33). Cited in all three synoptic gospels, a version of it also appears in John 12:25.

The vehemence of his chastisement of Peter is appropriate given the importance of this teaching that follows it. To attempt to dissuade Jesus from offering his life fully to God, regardless of the risk or sacrifice, is to align oneself with the forces that oppose him.

The word “life” shows up four times in just three verses (Mark 8:35-37). In Greek life is psyche, the lifeforce at the core of our being. In Hebrew it is nephesh. “The Lord God formed the human from the dust of the ground and breathed into his nostrils the breath of life and he became a living being (nephesh).” (Genesis 2:7) Our life is a gift that comes from our being formed in the image of God, each a unique expression of that image.

Losing our lives doesn’t mean becoming others’ doormats. It doesn’t mean seeking martyrdom or victimhood so as to be pleasing to God. What we lose is the notion that our life is our possession as we embrace the reality that it is a gift from God in whose image we are created. While that may mean experiencing inconvenience, risk, and sacrifice along the path of discipleship, it doesn’t mean giving up our unique gifts and identity. On the contrary, such losing is the path to finding them. (Excerpt from sermon by Alyce M. McKenzie, “Finders Weepers, Losers Keepers”)

Says Andrew Lincoln in commenting on John’s version of this saying, “To save, find or gain one’s life is to attempt to live one’s life as if one owned it, and it is an enterprise doomed to failure because life is a gift from God. On the other hand, to lose one’s life is to renounce the attempt to secure life for oneself and, instead, to spend it in the service of God and others. Those who lose their lives in this way find that they receive those lives back from God.” (Andrew T. Lincoln, Black’s New Testament Commentaries, The Gospel According to Saint John (New York: Continuum, 2005), p. 350.