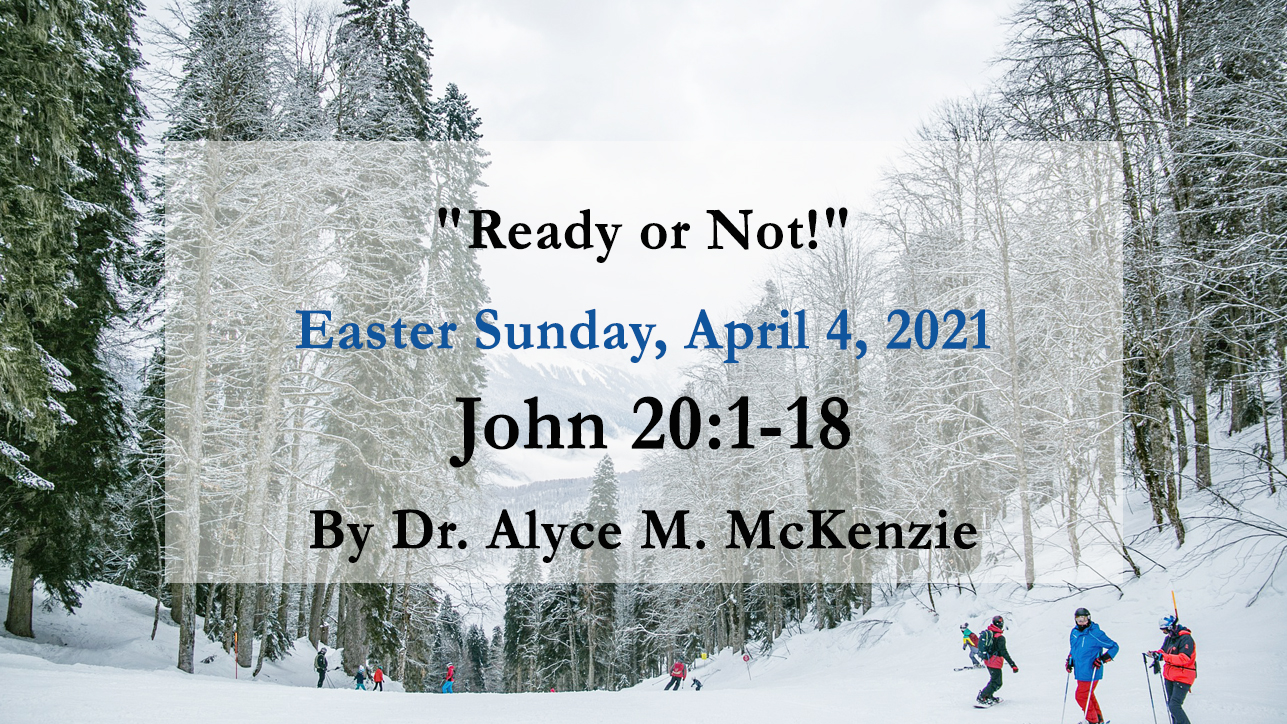 The youth in the group I was chaperoning all knew how to ski already. They were already at the top. I waited at the bottom on the beginner slope to take a group lesson before ascending.  As we waited for the instructor to arrive, I looked up at the mountain on which I would soon be standing, wreathed in clouds and sky of blue. The lesson taught me to stand upright while moving my feet in the heavy skis. Unfortunately, we ran out of time and didn't get to practice how to get off the ski lift. The instructor told us, but I learn better by practicing new skills. But, ready or not, when the time comes to get on the lift, you get on the lift.

The whole ride up the mountain I kept rehearsing the instructor's instructions- but wait, did the poles go down first, or the skis? I anxiously scanned the instructions on the side panel of the lift booth. "Good morning!" a cheery young man sharing my lift booth broke into my thoughts. He told me he was a youth pastor here with a group. I told him I was an associate pastor at church a few hours away and we talked a little shop. It distracted me a bit from my anxiety. We got closer to the top, and he said, "Well, it's been great talking to you. Remember, God loves you and have a super day!"  I nodded nervously. The lift arm swung open. He exited with athletic grace and skied down the mountain. I fell flat on my face, skis sprawled- such an obstruction that two attendants had to stop the lift and drag my body out of other people's way.

We all know that the forward momentum of our Lenten ski lift is supposed to bring us to the emotional mountain top of Easter: Resurrection Day, the victory of life over death, the end of tears. We hear the bright lemon trumpet tones, see wreaths of flowers on the altar, and admire the white draped cross. We know how we’re supposed to feel today.

For some of us, Easter Sunday isn’t so much a mountaintop we access with effortless grace. It’s more like that piece of playground equipment we used to play on in grade school. The big round flat platform with the metal handles - lots of kids could get on and whirl around if one person would push with their foot. Other kids would try to jump on as the wheel came around, but if you missed it this time, you had to wait until it came around again to get on.

I sing in the choir and we’re up behind the preacher. It gives me a good view of people’s faces in the congregation. On Easter Sunday I sit up there wondering if I’m the only person who is not quite ready to get off the ski lift. Not quite skilled enough in the art of leaving death behind and embracing life to feel as upbeat as I should today.

If it’s any comfort, nobody in John’s account of  Easter Sunday was ready for it either. They should have been. Jesus has dropped enough spoiler alert hints to get through to even the thickest of skulls. “Now my soul is troubled…it is for this reason that I have come to this hour” (12:27) “Let not your hearts be troubled, I go to prepare a place for you” (14:1,2) “A little while and you will no longer see me, and again a little while and you will see me” (16:16).

How odd that in this account of the first Easter, none of the disciples seems fully ready for Easter joy. All four gospels concur that the Resurrection took them by surprise!

They should have put the turkey and the candied yams in the oven, dressed in their new dresses and suits, loaded basked with multi-colored Easter grass and chocolate eggs, all signed a Happy Easter card to Jesus with an inspiring poem by Helen Steiner Rice inside, and skipped arm in arm down the path to take it to him, smiles wreathing their faces.

Mary Magdalene woke up early, while it was still dark, pulled her cloak around her, and walked shivering to the tomb, through the Jerusalem market, past sleeping dogs and horses, by one of the gates of the ancient walled city, deserted at this hour, except for the soldiers on top of the wall.  Outside the gate she is suddenly in the countryside, except for a large stone quarry off to the left that looks like a huge gravel pit.  From this quarry many slaves had provided stone blocks for building the city. To this quarry Mary goes with her grief.

She passes beneath the clifftop. Two men who had been crucified with Jesus still hang there, on wooden crosses where they will be devoured by birds and dogs.  She goes to a far corner of the quarry to a garden, where the cliffside has row upon row of hand-hewn caves, tombs for the dead.

All the empty tomb means for Mary is that Jesus' body has been stolen. She assumes the worst, not the best.  Who would assume something that is too good to be true?  She retraces her steps at a run and wakes Simon Peter and the Beloved Disciple.  They each clear the sleep from the corners of their eyes, throw on jeans and sweatshirts, stuff their feet into their sneakers, and come running.

1. First response to this Easter for which no one was prepared. The Beloved Disciple outran Peter. Who was he? We don’t know his name. We do know he was present in key scenes from the Gospel of John. He was present at the  Last supper and at the foot of the cross. He followed Jesus into the High Priest's house, and he followed the resurrected Jesus along the shore of the Sea of Tiberius (John 21:20).

What was this Beloved Disciple? Scholars debate. Maybe he was John Mark. Maybe Lazarus. Maybe Thomas.

Whoever he was, John portrays him as "one who had become very sensitive to Jesus through love (Raymond Brown, Anchor Bible, The Gospel of John, Volume 29, p. 1005).

But then - he goes on home.  Thinking, perhaps, "This changes everything, but I'm not sure how. Let me just mull this over a while before I tell anyone else about it."

Why this response? Was he overwhelmed, feeling like this was news too good to be true?

2. Second response to unexpected Easter. Then there is Peter, the brash big talker and then, in the pinch, the threefold betrayer. Bold as always, he doesn’t hesitate at the entrance to the tomb. He goes right and then, he goes right home. John tells us that he saw the linen wrappings and the cloth that had been on Jesus’ head rolled up in a place by itself. John doesn’t tell us his inner response. But Luke does. Luke tells us that “He was amazed at what had happened.” (24:12) He ran right in and then he ran right home.

Why this response? Was he numb with guilt over having betrayed Jesus? Did he feel unworthy of such good news?

The disciples go on home, clearing the center stage for Mary. On her second trip of the morning, she looks inside the empty tomb and sees something neither Peter nor the other disciple saw- two angels in white sitting at either end of where the body had been..

Usually, angels make weighty pronouncement like they do in Luke 24:5-7) and Matthew  "Do not be afraid… He is not here. He has been raised as he said. Come, see the place where he lay, then go quickly and tell the disciples, He has been raised from the dead and indeed he is going ahead of you to Galilee; there you will see him.’" (Mt 28:5-7)

If an angel is going to scare me out of my wits, at least bring directions about when and where to meet Jesus. But in John, there are no such directions. These angels just ask a really obvious question. "Woman, why are you weeping?"

I imagine that the angels, while she's explaining why she's weeping, are pointing behind her as if to say "Turn around, turn around." I think they have come to give directions, after all. To a Resurrected Lord who, from now on, is always standing right behind her, whose presence doesn't depend on whether she feels him there or not, whether she's ready to meet him or not.

Because, according to John's story, Christ rises in the dark. Christ rises for everyone. Easter is precisely for those who are not ready for it.

Easter is for Peter, too absorbed in the pain of his past to take it in. Easter is for the Beloved Disciple, who believes in Jesus' resurrection but needs time to process what difference it makes. Easter is for Mary, weeping over her loss while her Lord stands right behind her.

According to the story, Easter is for each of us who is all of them.

I know that tomorrow they'll put the marshmallow chicks on the bargain table at the grocery store, and take the lavender and yellow crepe paper off the shelves to make room for Mother's Day coffee mugs and gifts for the graduates. Like an impatient waiter whisking our plate away before we're through eating, our retail culture doesn't give us much time to savor Easter. But it can’t prevent our liturgical lingering. It can’t take away the 50 days of the Easter Season until Pentecost that lie ahead. Days to pray and to ponder. Days to rejoice in the Lord who stands behind us healing our past, who stands before us framing our future with joy.