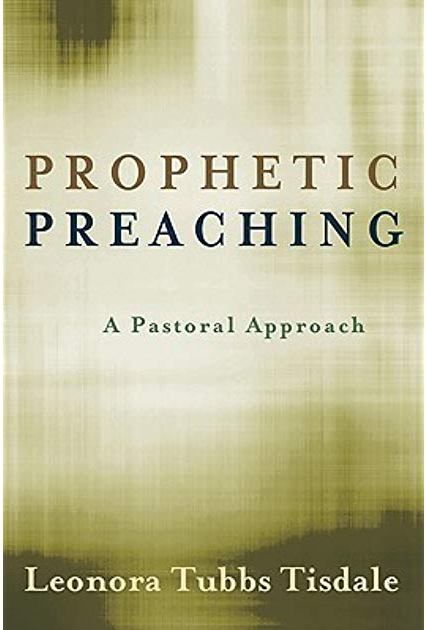 Leonora Tubbs Tisdale is Clement-Muehl Professor of Homiletics at Yale Divinity School. She has written a number of books in the area of preaching and worship.

The first chapter tackles the question surrounding the (seemingly) lack of prophetic witness in the Church. Dr. Tisdale spends a good amount of time analyzing others’ definitions and ultimately concludes that prophetic preaching is the intersection of human suffering and God’s proclaimed grace. She believes that there are seven hallmarks to prophetic preaching:

Prophetic proclamation requires a heart that breaks with the things that break God’s heart; a passion for justice in the world, the imagination, conviction, and courage to speak words from God, and humility and honesty in the preaching moment.

Dr. Tisdale closes this chapter with some remarks on why she believes there is a lack of prophetic preaching. She lists seven reasons, two of which I will recount here: an inherited model of Biblical interpretation that marginalizes the prophetic dimension of Scripture and a fear of being disliked, rejected, or made to pay a price for prophetic witness.

In the second chapter of the book Tisdale deals with how we can best rekindle the prophetic fire within us. She speaks of a number of things: how we are afraid of silence, how there is a chasm between the individual and corporate readings of our Holy Scriptures and how we need to lean into our individual spiritual gifting. I found her insights about silence and preparation extremely helpful. Often in parish ministry our time is soaked up by meetings and appointments and it becomes easy to dismiss sermon preparation time (and time for spiritual reflection/connection) as “not effective.” Tisdale sounds the alarm and lets us see that this time is extremely valuable, and perhaps, one of the main foci of our vocation.

In Tisdale’s third chapter she spends time portraying ways in which we can speak prophetic words as pastors. I believe some of her best advice is titled, “starting with the familiar and moving toward the unfamiliar.” This, Tisdale says, “…can allow people the time and the space to have their horizons stretched from the inside out. And in that process, we can also establish points of identification with them that strengthen the bonds between pastor and people…”

The fourth chapter centers on forms that a sermon might take. Two helpful forms put forth are the: Invitation and the Preacher’s Stand. The first, Invitation, allows greater lay participation. The second, Preacher’s Stand, helps the congregation relate to the position that the pastor is taking on a controversial issue (nuclear disarmament, gay marriage, etc.). In both forms, it’s important to acknowledge that people seeking to be faithful Christians have profound disagreements.

Lastly, Tisdale talks about the integrity of the sermon. She speaks about how most prophetic sermons need a call to action and then subsequent follow-up and accountability. An integral part of this is a focus on the Kingdom of God and the ability to merge the realized eschaton with where your congregation is situated in the present.

The book would be strengthened by some guidance on how to handle the fallout of prophetic preaching.  What happens to a community if you give a prophetic sermon on gay rights and then your top three biggest donors threaten to leave? Or what happens if your top three donors do leave the community? How should a pastor respond? Tisdale has pointed out that the reason many pastors don’t preach prophetically is because they fear the consequences. So some wise advice from her on navigating the consequences would be a great gift to preachers.

Tisdale deftly applies historical accounts and helpful exegesis to sensitive topics and encourages her readers to come alongside her and courageously proclaim the good news in whatever contexts they may find themselves. If you are a pastor or seminarian, I highly recommend Leonora Tubbs Tisdale’s book Prophetic Preaching: A Pastoral Approach. If you are a layperson you may find some of it helpful — assuming your pastor is preaching prophetically!

Joshua Lemons works at Westbury UMC in Houston, Texas as the Director of Student Ministry. He holds his Master of Arts in Theology from Fuller Theological Seminary and is finishing his final year in the Master of Divinity program at Perkins School of Theology.