Preaching in the Era of Trump by O. Wesley Allen, Jr. 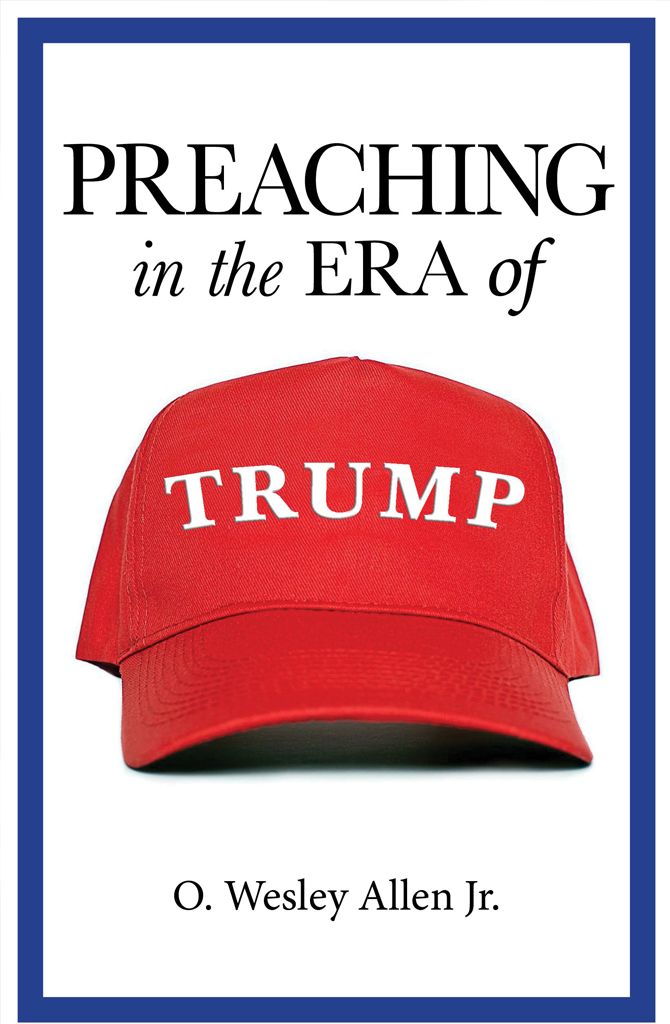 Preaching in the Era of Trump by O. Wesley Allen, Jr.

Books on preaching come in a variety forms. There’s the intro book, books on specific technical aspects, and new adventures in homiletical theology. Increasingly over recent years, pastors have been treated to books whose main aim is to frame the sermon in an ethical way. How can the sermon reflect the beauty, truth and goodness of God as discovered in our scriptures, tradition, reason, and experience? Not since the civil rights movement of the 1950s and 60s has that question become as keenly felt as in the 2016 national election cycle in the U.S.

In Preaching in the Era of Trump, Wes Allen offers expert guidance in the practical ethics of preaching following the election of Donald J. Trump, an ostensibly Christian person whose own behavior and speech violates so many of the moral norms we have come to expect not only of Christians but of anyone who seeks the mantle of the presidency. Allen owns up to his own social location as a white, cisgendered, heterosexual male, as well he should since these are the categories that are so often considered “normative” in church leadership. But that admission opens toward a generosity of spirit that is rare and engaging. You can tell; Allen himself is somewhat shocked that he had to write this book! But he sets to his task with considerable wit and prophetic edge.

The book falls into two major sections, moving from insightful description of the cultural and ecclesial terrain to thoughtful prescriptions for best preaching paths.

The first section, titled “Broad Issues”, identifies with the reader who is still enduring waves of shock following the Trump election, and moves to help the reader understand how we got here. Allen’s economical treatments of postmodernity and structuralism are helpful, particularly for the pastor who may have left seminary in the 80s and 90s before such topics were all the rage. As a parish pastor myself, I find Allen’s pulpit coaching to be valuable. He cautions us that we cannot ignore the deep fissures in the culture and the Church. Neither can we simply champion one worldview while condemning others. Rather, Allen offers a more excellent way; preachers and teachers can listen deeply and identify with our congregations, recognize our own prejudices and intolerance (especially toward those in our churches that may have voted differently from us), establish strong and trusting pastoral relationships, preach in such a way as to create space for disagreement and conversation, and embrace the vulnerability of prophetic preaching.

I had worries about the title of the book. I was concerned that it would date the content too much and be less portable to future “eras”. I was also troubled that it might be off-putting to some folks who should really read it but won’t because of the title. Has Allen’s title made the book both timely and time-bound? Here’s my thinking: The second half of the book is divided into pulpit strategies around four ethical commonplaces in our culture: race, gender, LGBT issues, and Islam. Each chapter leads with a rehearsal of multiple quotations from those in Trumplandia on that specific issue. Allen thus convinced me that no other title could do. Indeed, it is THIS president and THIS moment that galvanizes the preaching imagination for the days ahead. The quotations are hard reading, but not fake news. What may be harder reading are Allen’s reminders that the Church has often failed miserably in each of these areas. Allen concludes each chapter with sage advice for strategic preaching from these ethical commonplaces. Allen admits that his guidance is not meant to be exhaustive but suggestive. I will offer some insights from each of his four commonplaces.

Allen acknowledges his own social location and chooses to offer strategies for other white pastors in predominately white congregations where urgency is needed given Trump’s “race-baiting” (65-66). He recommends that pastors step back from individual incidences of racism to see the larger historical and structural racism that favors white Christians by default even though some white persons do not identify any conscious racist intention.  For Allen, preachers speaking in the first person as “recovering racists” is crucial (67). Pastors should choose biblical texts that invite whole sermons on ethnic differences and should become adept at treating issues of race in sermons on other topics to reinforce that race is an “ongoing conversation” in the Church, not merely a topic for a special occasion.

As with race, Allen invites the Church to look unflinchingly in the mirror and see its inherent sexism and patriarchy. Many of the advances of the past century came as women pushed the Church toward equality. Allen exhorts preachers to reveal patriarchy as a clear concern to God and encourages the continued use of gender-inclusive language for both God and humans. Importantly, Allen names the difference between “sex” as a biological designation and “gender” as a social construct and encourages the reader to listen carefully to people who understand both labels in non-binary ways. Sermons should celebrate leadership by women in Church and culture; sermons should be preached by women; and sermons should make use of women, biblical and contemporary, as examples.

The Church has consistently been the most heteronormative institution in our heteronormative culture. Changes in hearts and minds have mostly been recent developments. What can preachers say here? Allen encourages preachers and their hearers to understand the terminology around sexual orientation and gender. Pastors should do more exegetical work with the six “clobber” passages to understand them in their cultural settings and then look to other passages that celebrate human love to apply them to same-sex relationships.  In other words, how can sermons include perspectives of queer people? How can the sermon include their witnesses of how they see scripture applying to their lives of love and justice?

If we are those who love neighbor as we love ourselves, then we Christians should love Muslim people by interpreting their religion with as much generosity as we can. Preaching should avoid stereotypes of Islam, particularly those foisted upon the culture by certain far-right Christian preachers. The Bible is rich with instruction to care for the sojourner and the refugee. Because of wars in the Middle East, many of the world’s refugees are Muslim.  Preaching can reduce fear of these “others” by dispelling myths and calling for compassion.  If our preaching stance is not defensive toward Muslim people, then our people may just relax a bit and come to a more considered understanding of these siblings in Abrahamic faith.

If there is a theme sentence for this book, it can be found in this statement which is repeated in several forms throughout: “…it is not the preacher’s job simply to preach the gospel; it is the preacher’s job to get the gospel heard, then believed, then lived” (20). Allen has faith that good, gospel preaching can counter the unethical and unjust public rhetoric of any era. But the pastoral prophet (or prophetic pastor?) should know that speechifying is not enough. God is at work in preaching to shape a people who can make their own confessions and take their own ethical actions. Allen is clear: you don’t have to agree with him and his diagnosis, but we preachers dare not sit safely on fences nor imitate the rhetorical violence of our commander in chief and his ilk. Wes Allen reveals a more excellent way unfolding before us, if we are but bold enough to walk it.

Sam Persons Parkes is the pastor of Cloverdale UMC in Dothan, Alabama.  Sam earned the M.Div. from Candler School of Theology at Emory University and the Th.D. in homiletics from the University of Toronto.  He has been a contributor to the Abingdon Preaching Annual and to the recent Abingdon Theological Companion to the Lectionary.  He is an active preaching coach and Lead Partner of Partners in Preaching, a monthly preaching coaching group in Alabama and Florida. Sam also serve on the Preaching Consultation Team of UMC Discipleship Ministries, helping to devise a denominational plan for increasing preaching excellence in the UMC. Sam is serving in his 27th year under episcopal appointment in the United Methodist Church and is a clergy member of the Alabama-West Florida annual conference.  He likes to spend his time cooking good food and then attempting to run it off.  He is also the father of two exceptional children who keep his academic fancies grounded in the concrete world. You can connect with him at www.sparkpreaching.com and www.facebook.com/sparkpreaching/.