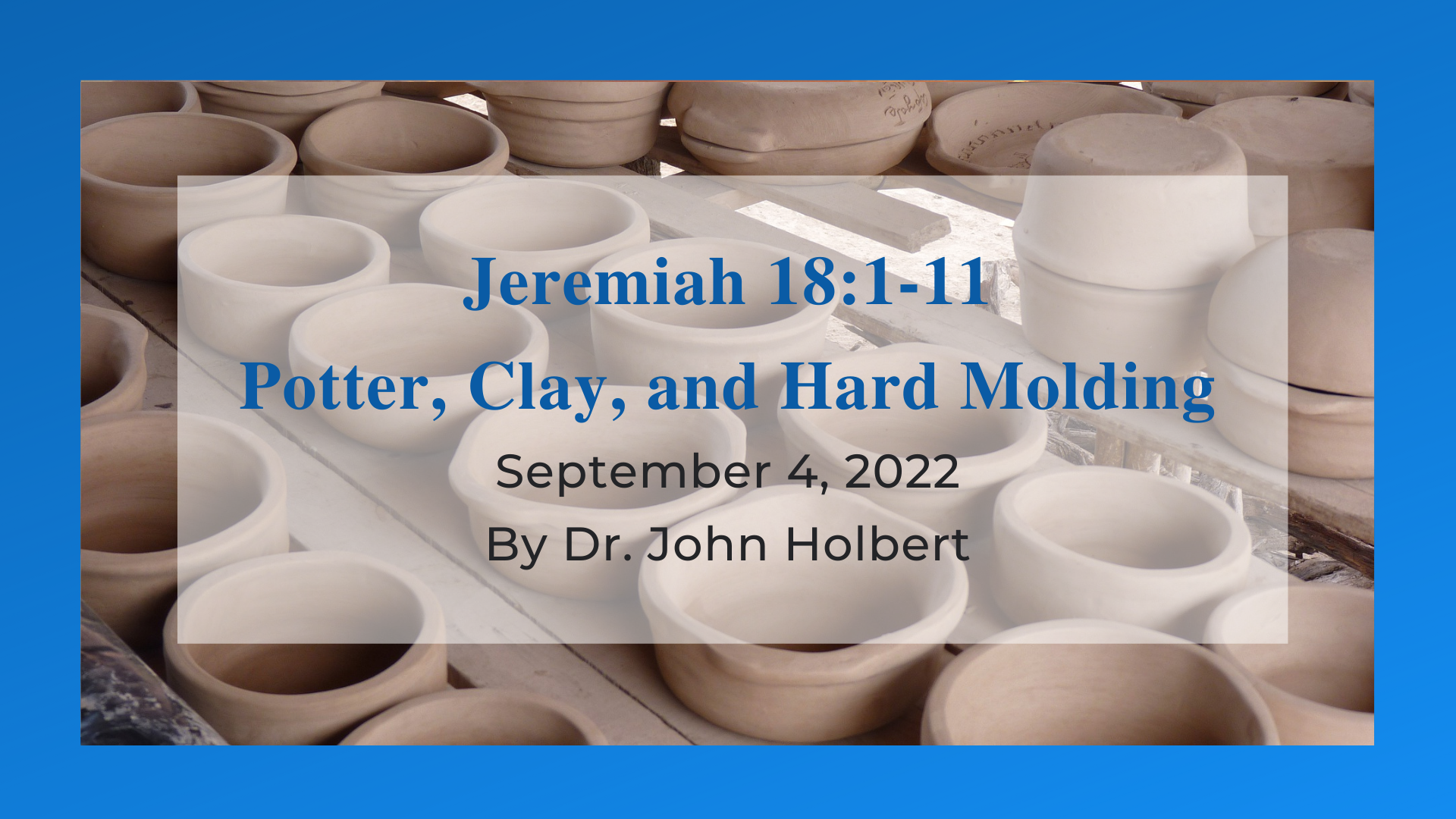 Today’s text from Jeremiah tells of a trip the prophet makes at the direct command of YHWH. He is to go to the house of a potter and observe the artisan at his work. In reality, the word translated “potter” is a rather more general term for any artist; in fact, it is this verb that is employed to describe the action of YHWH when the ‘adam is formed at the beginning of the second account of creation in Gen.2:7. Because in that tale, as we will find here in Jeremiah, a soil mixture is used as the substance for the creation, we may assume that the YHWH of Genesis is a divine potter, flinging from the heavenly wheel both human and animal creatures. Jeremiah, we remember, has been raised in the priestly retirement home of Anathoth, so it is possible that this story of a trip to the house of a potter may have been inspired by the prophet’s rich knowledge of the lore of Israel.

Unlike the divine potter, this very human artist takes several tries at his spinning wheel to achieve the result he seeks. “The clay vessel he was making was misshapen in his hands, so he reworked it into another vessel that appeared better to him” (Jer.18:4). The verb I have translated “misshapen” (NRSV “spoiled”) often means “shattered” or “destroyed.” But given the context of a potter’s work, “misshapen” seems appropriate. I remember all too well my pathetic attempts many years ago to shape something on a potter’s wheel, the result of my feeble efforts resembling an unidentifiable lumpen mass, and not a cup or plate or chalice as I had hoped. However, this experienced potter merely starts over, smashing his spoiled clay onto the wheel, adding some water to moisten the clay, and then moving his hands expertly up and down the whirling mass, forming it again this time into something pleasing and useful.

This whole process, of course, for a prophet is a powerful metaphor for his work as YHWH’s mouthpiece. “Then the word of YHWH came to me: Am I not able to do with you, house of Israel, exactly as this potter has done? Watch! Like clay in the hand of the potter, so are you to me, house of Israel” (Jer.18: 5-6). Suddenly, a trip to the potter’s house has become a journey into the mind and will of YHWH. Israel which in Jeremiah’s context means Judah and Jerusalem, in the hands of YHWH is clay to be formed and molded into whatever shape YHWH prefers. Though YHWH may have at the beginning of the nation’s life molded them into the vessel of YHWH, due to their refusal to follow the will and way of that God (see last week’s Jer.2), YHWH now feels moved to smash the original vessel, a vessel that has become misshapen and determines to start over with these people. Such a new beginning, as the work of the potter makes clear, can only commence after a difficult period of “pulling down and destroying” (Jer.1:10), of smashing and reconfiguring.

The new vessel of YHWH may only appear “if that nation of which I have spoken, turns from its evil,” and after that “I will change my mind about the evil that I intended to do to it” (Jer.18:8). YHWH is no God who is fixed on behaviors that cannot change (see the hilarious book of Jonah). The “impassable” God of the later theologians, that God of predestined actions, is not the God of the Bible. In more than a few passages, YHWH is seen to be a God who “changes the divine mind,” perhaps most famously at the pleading of Moses on Sinai in Ex.32. God is ever anxious to witness change in the people, a change that can trigger a change in YHWH’s plans.

Of course, that change can go both ways. If a nation appears to be on the right track, but then falls into evil ways, YHWH may change the divine mind again about the good intended and turn instead to harsh evil against them (Jer.18:9-10). Just like the potter witnessed by Jeremiah, YHWH claims to be “a potter shaping evil against you, scheming a plan against you” (Jer.18:11a). Because that is so, YHWH urges Judah and Jerusalem: “Turn immediately from your evil ways; make your steps and your actions good” (Jer.18:11b).

This dramatic scene at the house of a potter should not be understood in an overly simplistic way; we are not to conclude from the tale of the potter that YHWH always acts in strictly obvious ways, rewarding good and punishing evil. Anyone who has spent any time in the book of Job must conclude that any such simple calculus cannot be the way that the universe, and the God who shaped it, may be said to act. And furthermore, the sharper definition of what evil in fact is, according to Jeremiah (namely the refusal to live out the calls to justice and righteousness for all people, as so many oracles of the prophet make plain), also suggests that tit for tat relationships between YHWH and the chosen do not exhaust the complex interactions that may occur. In the potter’s house, we witness the freedom of YHWH to act in all ways, not some easy and expected reactions of YHWH to the sins of the people.

“Thou art the potter, I am the clay,” drones the well-known song, not one of my favorites, I admit. I find the later words—“while I am waiting, yielded and still”— to be rather less than the divine-human relationship may be characterized. Though YHWH may mold the clay to YHWH’s will, that same YHWH awaits eagerly for the good actions of the clay, not merely for its quiet yielding. Nevertheless, the scene at the potter’s house is a rich one, fully worthy of our deepest attention. For we are clay in the hands of our God, and as such can only hope that we are fully worthy of the artistry that God has bestowed on us. May we become vessels of justice and righteousness for the world God has given us.