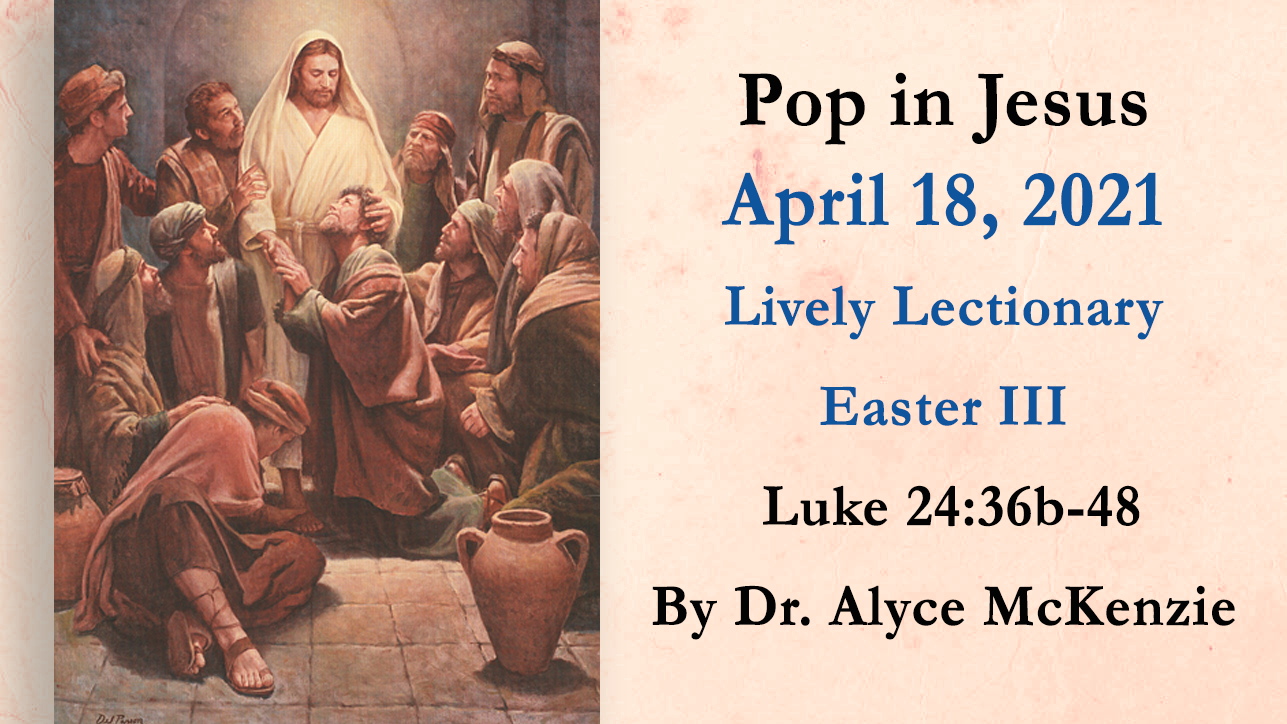 I got an ad flyer recently in the mail for a “Pop in Maid Service.” It’s a cleaning business that has several teams of people who go around in yellow cars with their phone number on the side. I saw one of their cars in front of a neighbor’s house last week. People were getting out of the car with mops and brooms. They were popping in. When their work is done, they’ll take their leave: they’ll pop out.

In Luke, the first time Jesus pops in is when he joins 2 disciples who are walking despondently along the road to Emmaus (Luke 24:15). After challenging them and teaching them, he breaks bread, blesses, and breaks it. In that moment, they recognize him and, in that same moment, he pops out again. “He vanishes from their sight” (24:31). Later that same day the two Emmaus Road disciples return to Jerusalem and are telling the larger group (“the eleven and their companions” 24: 33) about their experience. He pops in again. Then, after proving his corporeal reality by showing them his hands and feet and eating a piece of fish, he teaches them, commissions them, and leads them out to Bethany for a blessing and a farewell. Here he doesn’t exactly pop out. It’s more gradual. He “withdraws from them and is carried up into heaven.” (24:51)

In the previous story of Jesus walking along the Emmaus road, his spiritual companionship and presence seem to be the focus. Here the physical reality of Jesus’ resurrection body is the focus. Luke seeks to stress the identity of the Risen One with the earthly Jesus by emphasizing the physical reality of his resurrection body. He shows them his hands and his feet.  He eats with them, a detail in keeping with a well-attested tradition of Jesus eating with his disciples after the resurrection (John 21:13; Acts 1:4; 10:41). The similarities between this passage and John 20:19-23 are obvious. In this sequence in Luke, as in two others (Mt 28:9f, 16-20; John 20:11-18, 19-23), an appearance to individuals is followed by an appearance to a larger group. The sequence of this passage in Luke 24 is like a three-act play: Jesus appears suddenly. The disciples respond with fear. Jesus calms their fears.

People respond differently to Pop in Jesus. Some people worship him immediately. Some don’t recognize him until there is some word, or action that reminds them of their former time with him – a calling of their name, a breaking of bread, a miraculous catch of fish. Some react with a combination of joy and doubt.

With the Pop in maid service, the term “Pop in” is positive. It means they arrive just when you’ve hired them to show up, they clean your house, and, when their work is done, they pop out. Everyday life is way less convenient. People pop in without an appointment at the most inconvenient times. And they pop out again without warning, often leaving all kinds of unfinished business. “I think we should see other people.” “I’m sorry to have to inform you that your loved one passed away this morning.” Parents leave young children and never return, leaving the child to spend their lives blaming themselves. When they’re old and vulnerable and need care, sometimes the same parents pop back into their children’s lives. People we love and depend on pop out, die, too soon. Not knowing when people are going to pop in and out makes for a very unpredictable life.

In the odd plot of our lives in which people come and go, pop in and pop out, it is good to have one person we can count on. The resurrection appearances in Luke remind us that Jesus says goodbye only to say hello. Jesus is with us in the presence and person of the Holy Spirit. He only left so he could stay.