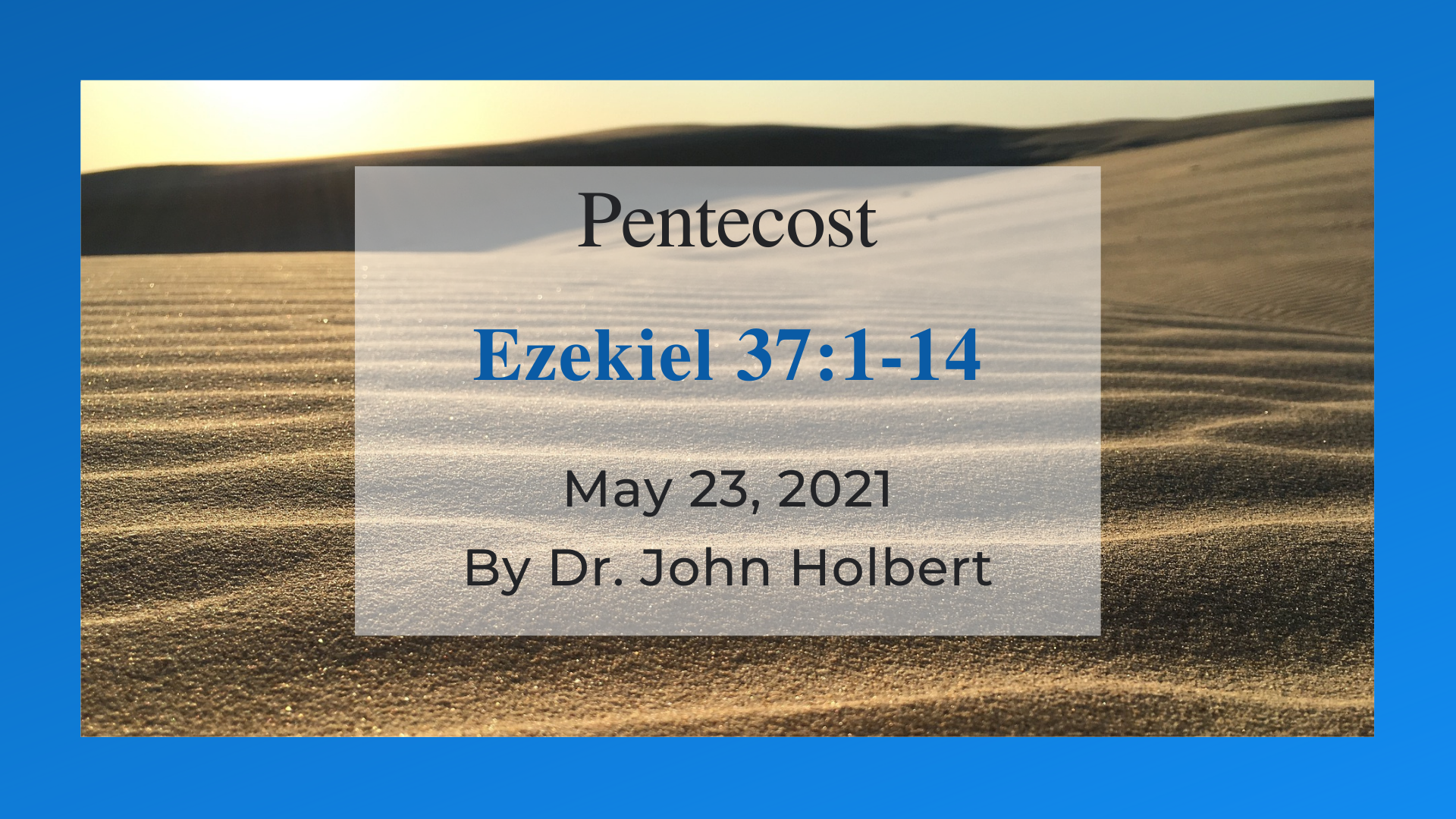 Most of you, I am sure, will revert to the famous Acts 2 text on this Pentecost Sunday. It is the one we know, the one that focuses on Peter’s sermon preceded by the tongues of fire, and followed by the 3000 converts to the faith. I, however, have two large problems with that text. First, it is, as are most of the sermons from Acts, decidedly anti-Jewish, accusing many of Peter’s hearers of the murder of the Jewish Messiah (Acts 2:23), and second, it raises a very serious theological problem at that same verse, claiming that the killing of Jesus at the hands of the Jews was in fact preordained by God who had it all planned. This I find repugnant, making God out to be both sadist and manipulator of human action, the essence of a hardened practitioner of predestination. No phalanx of loud trumpets and mass choirs can cover those stark realities enshrined in Peter’s sermon.

As a result of those difficulties, I suggest a turn to Ezekiel 37, the famous vision of the dry bones. In that text, I think we may find what we need in Pentecost, namely a focus on the astonishing action of the Spirit/Breath of God, a conviction that the Spirit always gives life, and the wonderful news that by the breath of God we are revived again and again. The tale itself is drilled in most of our memories, but the historical context of the story gives it a crucial significance, making it all the more relevant for our own day. It is generally believed that Ezekiel was deported to Babylon among the first exiles from Jerusalem in 597BCE. As one of the first to leave the city, he did not witness himself the horrors of the defeat and destruction wrought by Nebuchadnezzar ten years later. There can be little doubt that he heard about it from his new Babylonian home, how the supposed Babylonian puppet, Zedekiah, had foolishly rebelled against his overlords, how his family had been killed in front of his eyes, how he was then blinded, ensuring that his final visual memory would be those monstrous deaths, how he was dragged off to Babylon along with the leaders of the Judean community (this shocking history is briefly recounted at 2 Kings 25).

Thus, in light of this backdrop, Ezekiel’s vision of a valley full of dry bones, a valley that God’s own spirit leads him to see, is a clear portrait of the fate of Judah in Babylon, the absolute certainty of their hopeless exile, their lack of future: they are those dry bones. When Ezekiel is asked by YHWH whether or not he thinks those bones could live, his somewhat reluctant reply is, “YHWH, only you know,” meaning something like “Don’t ask me! As far as I know, dry bones can hardly live!” But YHWH immediately commands the prophet to “prophesy to the bones.” “Give them a sermon, mortal,” commands YHWH, and so Ezekiel does. Some of you may often have thought that you were preaching to dry bones on occasion, your church’s pews filled more with unresponsive skeletons than living humans! Yet like Ezekiel, you preach anyway. But following this valley sermon, things start happening. There is a sound of rattling, bones attach to bones, sinews bind the bones together even tighter, skin covers the attached bones, turning those formally dry bones into the semblance of human beings.

But something is missing. Just as YHWH in Genesis 2 formed human beings out of clay on a potter’s wheel, but had still to breathe into the pots “the breath of life,” so YHWH now commands Ezekiel to “prophesy to the breath,” using a word that may also be translated as “wind.” At Ezekiel’s word, the breath “comes from the four winds,” and breathes on the inanimate bodies “that they may live.” And so it happens, and after the breath enters them, “they lived, and stood on their feet a vast multitude.” The prophet continues to make it plain that this entire vision has been directed at hopeless and hapless exiles in Babylon, imagining that like the dry bones, they have been forever cut off from home and hope. Not so, says Ezekiel! With the power of the breath/spirit of YHWH, they have a future and a hope, rooted in the conviction that with YHWH there is finally no death so dead that YHWH cannot find life in it. As Frederick Buechner put it in his fabulous novel, Godric, “All the death there is, set next to life, would scarcely fill a cup.” There is Pentecost hope, a hope that long preceded the sermon of Peter, that long preceded the vision of Ezekiel, that began in the very foundations of the world, created by a God who is in the business of willing hope and future for all creation for all time. In addition, our current climate catastrophe, the dangerous heating of the planet due primarily to our heedless burning of fossil fuels, may only be mitigated by Ezekiel’s marvelous announcement of the gift of YHWH’s breath, from the four winds, a breath that infuses all life, a breath that binds all things in the cosmos together. We humans are not masters, nor even stewards of God’s world; we are but a part of that world, bound up with all creatures and things, but charged to care for all those creatures uniquely due to our dangerous propensities to bring destruction and death to all of those of whom we are part. This Pentecost, let us celebrate far more than the “birthday of the church;” let us proclaim and live the interconnectedness and bound future of all life, made viable and hopeful by the ever-present breath of God.