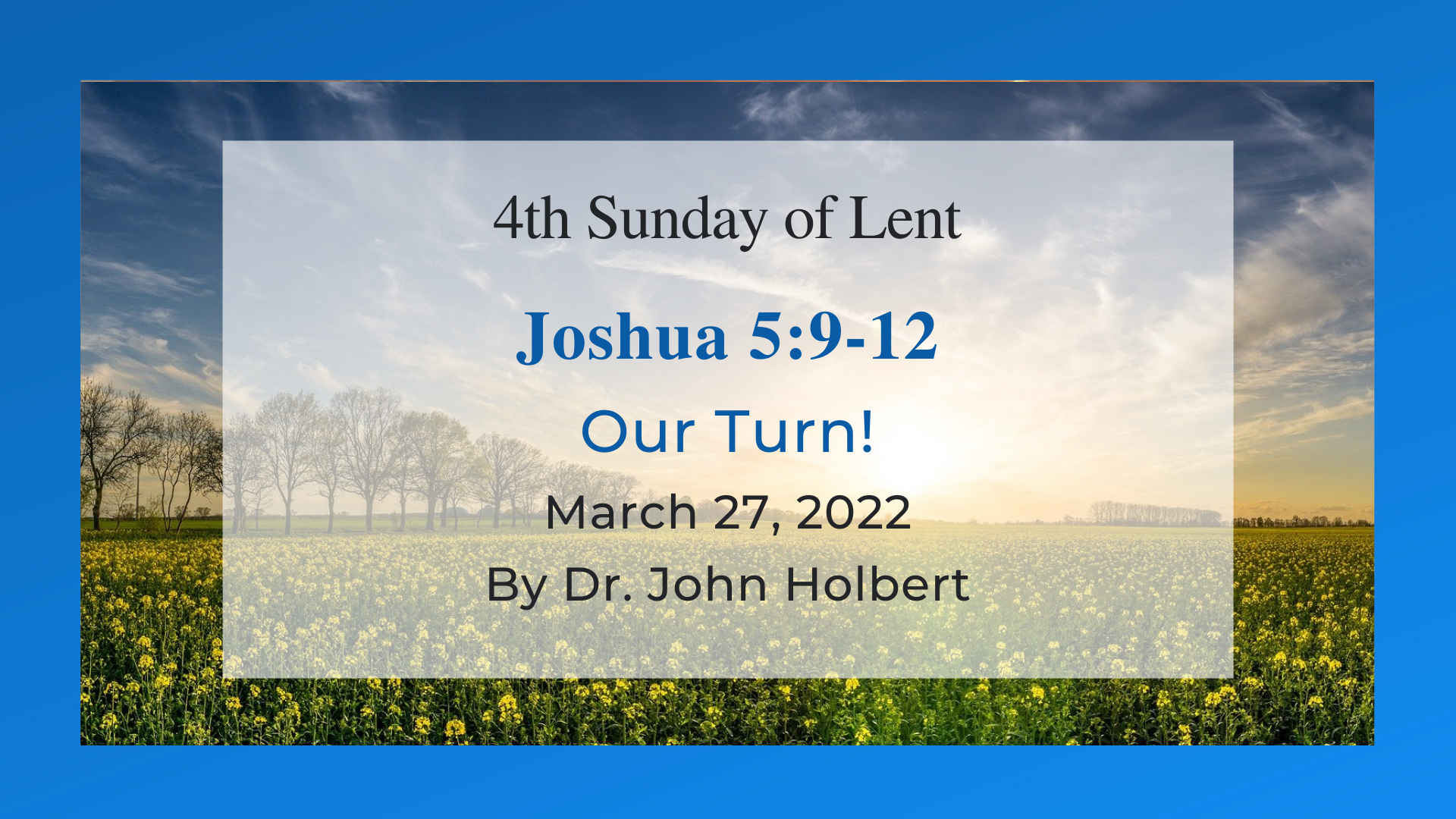 The text assigned in the lectionary for this 4th Sunday of Lent seems a rather peculiar one. Joshua is in the main a propaganda piece, offering a fictionalized literary history of the supposed “conquest” of the land of promise. Archaeology has long made any sense of history in the book highly problematic, despite numerous efforts by more conservative scholars, deeply tied to the notion that actual history yields actual truth, and the belief that without historical facts the Bible cannot be trusted as a sacred book. I find all of those assumptions false for the simple fact that history is by no means the test of what may be termed true. Shakespeare’s “Hamlet” is clearly true, in multiple senses, but hardly in any historical sense; no trip to Danish Elsinore need be undertaken to prove the play’s truth—or falsehood.

If one can follow the train of thought provided by Joshua, and that is often no mean feat, the wondering escapees from Egypt, now led by Joshua following the death of Moses, stumble through the Sinai peninsula for an astonishing 40 years (it is about 100 sq. miles in size) and find themselves on the east side of the Jordan River, near a place called Gilgal, connected loosely to the Hebrew word for “roll.” Joshua 5:9 reads: “YHWH spoke to Joshua, ‘Today I have rolled away from you the disgrace of Egypt.’ That place is called Gilgal to this day.’” This apparent folk etymology has stood the test of time since even now a series of archaeological sites some 8 miles north of Jericho is still called Gilgal.

What makes this tiny tale even more odd is the fact that Gilgal is about 800 feet below sea level, slightly higher than the nearby Dead Sea and about the same elevation as Jericho itself. Thus, the “plains of Jericho,” mentioned at Joshua 5:10, where the Israelites are said to eat the Passover, are in fact arid and dry at most times of the year and ferociously hot in the summer. The storyteller must have had an early springtime in mind since he/she claims that the wonderful divine gift of manna simply disappeared the very minute that the wanderers tucked into the local produce of “unleavened cakes and parched grain” (Joshua 5:11), two staples of much later Passover celebrations.

We remember what the word “manna” means: “what is it?” The Israelites came from their tents in the wilderness, eager for any sort of sustenance and found a sticky substance on the ground (Num.11:6), tasting rather like a honey-capped wafer (Ex.16:14, 31). This stuff was strictly the gift of God, and sustained the Israelites for those 40 years, along with the occasional quail. But now that the people of God have come close to the land of promise, manna is no more, and they must now eat from the land’s bounty. Manna also served as a lesson about sharing in Ex.16:1-30. They were told to collect the manna only on six days of the week, and not to attempt any collection on the seventh day, because they would find none that sacred day. Of course, as they too often did, the people refused to listen to YHWH, rushing out on the seventh day eager for more manna to horde for themselves. Instead, what they tried to horde rotted and stank, teaching them that following the voice of their God was far better than trying to make do on their own.

However, now in the book of Joshua, the manna is no longer available, so they must survive on their own; their God will not directly provision them anymore. It is of course dangerous in the extreme to expect these regularly recalcitrant people to be able to act freely and helpfully on their own, cut off from YHWH’s direct support. Yet, the lesson of this tiny tale is precisely that: we humans cannot expect manna from heaven to sustain us; we must provide for ourselves, from our own labor and from our own provision.

Other stories of the Passover warn us that a proper Passover celebration necessarily includes those in the community who cannot supply what their family needs on their own. Passover is thus a sharing ritual where no one in the community must be allowed to go hungry. In the supposed first Passover, while the Israelites were still slaves in Egypt, they are commanded to “take a lamb for each family, a lamb for each household. If a household is too small for a whole lamb, it shall join the closest neighbor in obtaining one. It shall be divided in proportion to the number of people who eat of it” (Ex.12:3-4). In other words, when the manna is not freely abundant on the ground, all food gleaned from the land must be shared with all in the community. In that way, the ritual of Passover may be appropriately celebrated and the constant search for justice and righteousness might find fulfillment. Is it not extraordinary how even small stories are redolent of the Bible’s central concern for justice among all people? So again in this Lenten season, the call for justice is sounded loud and clear as we are reminded that Lent is both a time for self-examination and a time for allowing that examination to lead to engagement with our human siblings in a search for righteousness and justice. God’s turn was the divine gift of manna, but now it is our turn to provide for ourselves and others as we attempt to follow the call of God.