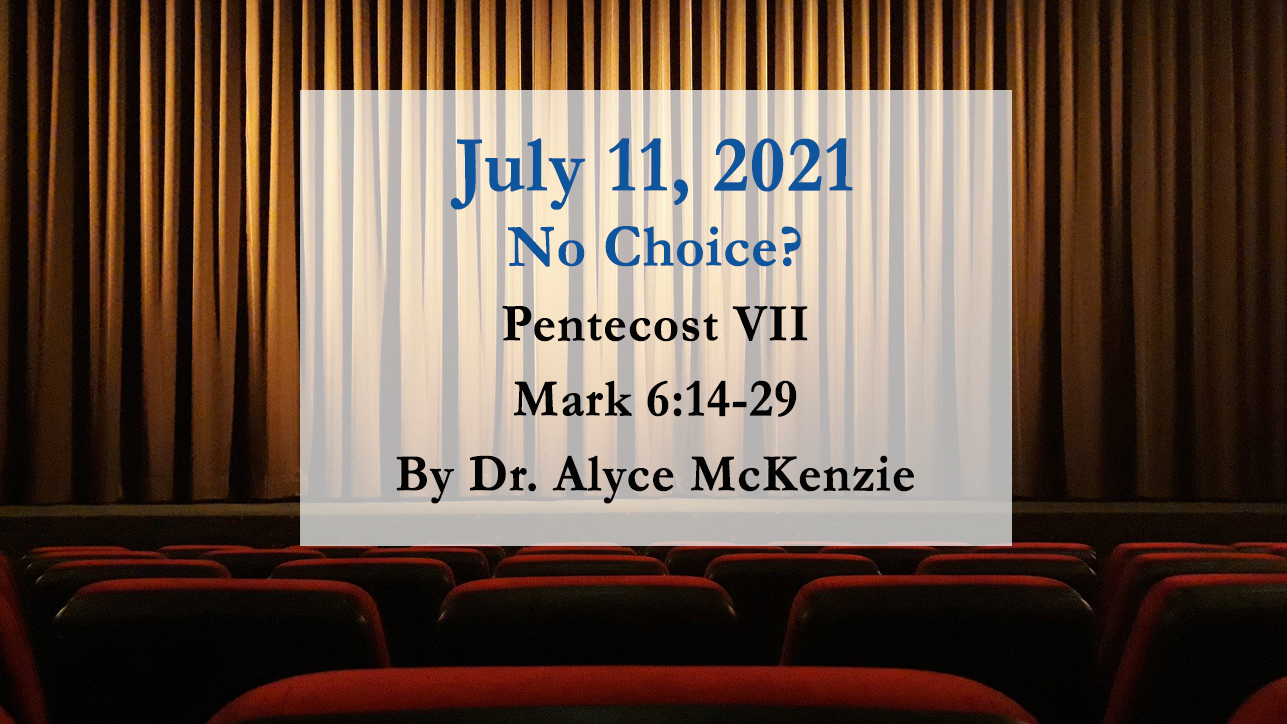 In Mark chapter 6:14 the news of Jesus' rising star triggers an attack of paranoia on Herod's part and a flashback to his ordering of the beheading of Jesus' cousin John the Baptist.

Imagine if Herod could stand on a stage, dark except for the spotlight that illuminates him, and offer a soliloquy in which he introduces himself to the audience and attempts to justify his actions in the deaths of both John and Jesus.

He wanted one of his sons to be "King of the Jews" when he died. If other half-brothers hadn't been executed or imprisoned, I'd have never ended up as his choice as his heir. I still didn't get all of Palestine. The Romans decided to divide it between me and my two brothers, Herod Archelaus (the one Joseph took his family to Galilee to avoid in Mt. 2:22) and Herod Philip II. I had to prove that I could fill my father's shoes and that I could be a ruler that people would obey and respect.

I traveled to Rome in 29 C.E. On my way, I visited my brother Herod Philip II and I fell in love with his wife Herodias, who also happened to be my niece. She agreed to marry me when I returned to Rome, as long as I divorced my first wife Phasaelis. When I married Herodias, John the Baptist spoke out against the marriage as incestuous. I respected and feared him because he was holy and righteous. When he spoke I felt confused and troubled. At the same time, I couldn't stop listening to him. But I couldn't allow him to publicly undermine my authority, and I also needed to keep my wife happy.

So I had John put in prison and hoped that action would satisfy Herodias' desire for revenge against him. I figured being in jail might even protect him from himself. After all, I wasn't the only person he was criticizing with his bold preaching.

My birthday was coming up. I threw a banquet and invited my courtiers, soldiers, and leaders of Galilee. At the end of such banquets, when everyone has had a lot to drink, there is always dancing. This time I allowed Herodias' daughter (my stepdaughter) to dance. I knew her nubile beauty would stimulate and impress my courtiers. As she danced, I felt very unfatherly sensations. When her dance was done, the applause was thunderous. After it died down, I called her over and heard myself offering her the moon, or anyway, half my kingdom as a reward for her titillating performance. In retrospect that was a mistake, but I was drunk and over-stimulated. That turned out to be a bad mix for John the Baptist.

She ran off, and I knew exactly to whom she was running. While I waited for her to return, I stood there with a confident smile pasted on my face for the sake of my guests, but inside I was thinking, "Please don't let her ask for what I'm afraid she's going to ask for."

But she did, and it was like a sword in my heart. The life of an innocent man seemed a high price to save face." But, as I looked out over the sea of faces of my guests, I felt I had no choice. I had to give her what she asked for. So I gave the order to send a soldier of the guard to behead John in the prison and bring his head to the girl to take to her mother. I knew I had no choice, but still, I couldn't bear to see the consequences of my decision.

Now, as Herod remains on center stage under the spotlight, I imagine him looking toward the future.

Here he comes. We meet at last. The young radical who called me a "fox" (Lk. 13:32)! Pilate has sent him to me to figure out what to do with him. I'm glad for the chance to meet him after all, I've heard about him. Meeting him face to face, I realize he's not John the Baptist raised from the dead, though there is a slight family resemblance in their features. There certainly is a great family resemblance in their fearlessness. I tried to get him to heal somebody or multiply some loaves or perform some other sign, but he refused to speak. I learned from the debacle with John that I don't ever want to order the death of an innocent man again, but I can't release him. The people would go wild. So I send him back to Pilate.[1]

I put Pilate in the same position I was in with John and Herodias. He believed Jesus was innocent, but couldn't risk angering the people and the religious leaders. Neither of us had a choice. I don't know why history has given us such a bad rap. People in power have a lot to lose. We should get a little credit for at least saying that we thought he was innocent before we gave him up to be crucified.

I hate situations in which I have no choice, but in which the consequences of my decisions are too horrible to face.

Josephus' Antiquities XVIII. 5.2 (The death of John the Baptist is recorded here.)