Much More Than Meets the Eye – Reflections on Ruth 1:1-18 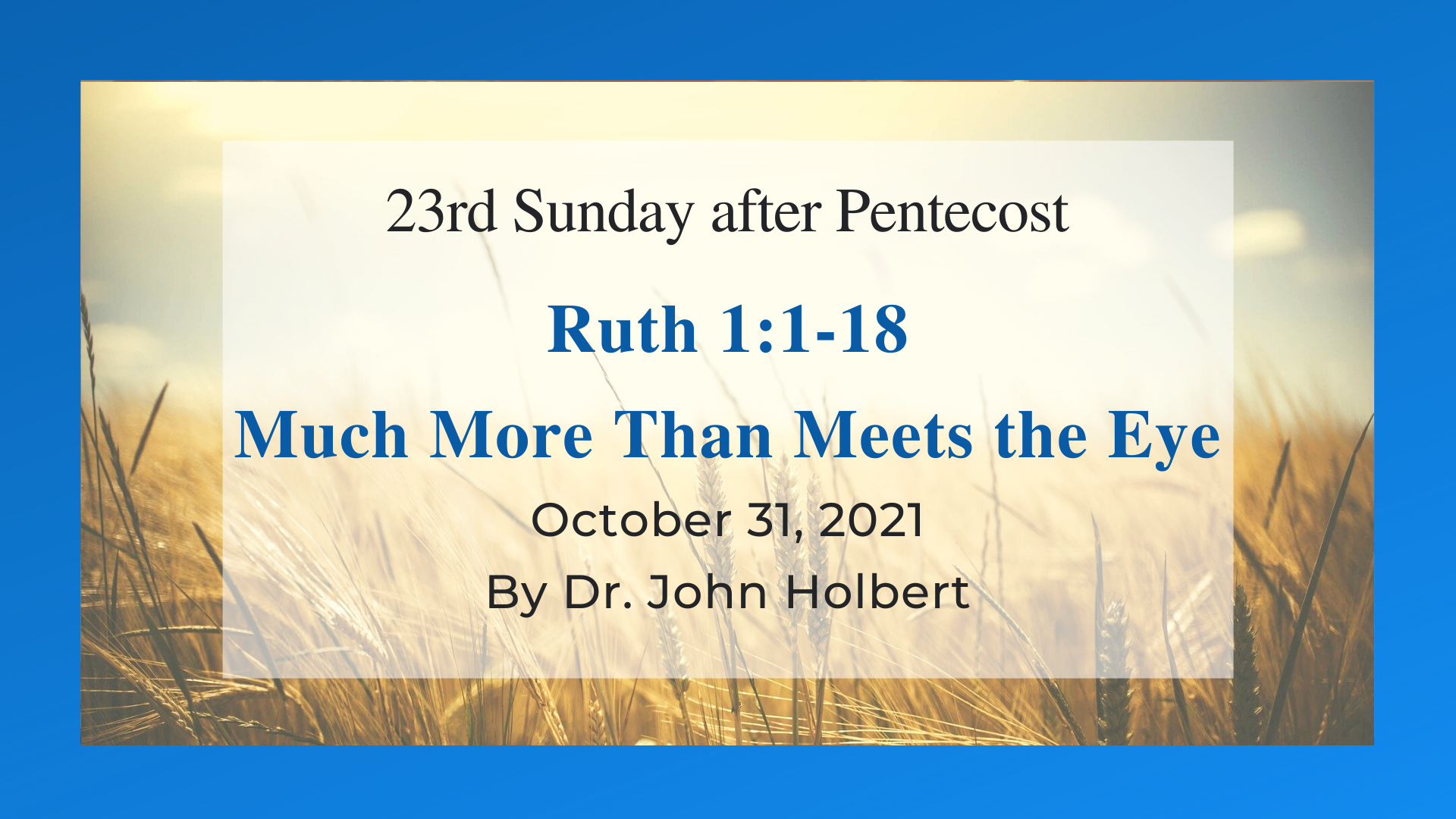 Much More Than Meets the Eye – Reflections on Ruth 1:1-18

I still remember my second year in graduate school (1972) when our class of eight students gathered its burgeoning Hebrew skills around the short book of Ruth. It is an excellent text for students whose Hebrew is improving, if not nearly fluent. The four-chapter book is easily read, the vocabulary small, the grammar classic Hebrew prose with only an occasional textual problem. And the story has the ring of a soap opera, with the astounding foreign heroine having a seemingly happenstance meeting with an equally astounding local man, admired by all who know him, the couple soon marrying and producing a child who becomes the forebear of Israel’s grandest king, the redoubtable David. We were taught that the fact of David’s Moabite great-grandmother was the author’s way of combatting the xenophobia espoused by the bigoted Ezra-Nehemia, that duo that demanded that all true Israelites “put away their foreign wives” perhaps in the 5th century BCE, thus providing an enduring model for an inclusive religious stance that is always welcome in our days of intractable suspicion of those not like us.

Well, that familiar summary of the tale of Ruth is not so much wrong as seriously limited in perspective and short on deeper insight into its riches. We eight students, only one of whom was a woman, taught by a man, simply were not prepared to engage the book on its own remarkable terms. It was not until I read the account of the book by Phylis Trible, some five years later, that I began to see what I had missed in that Dallas classroom. Her decidedly feminist outlook opened up the story for me in ways I could never have achieved on my own. I urge you to get a copy of that wonderful book, God and the Rhetoric of Sexuality, and read her fine analysis for yourself. What I will now offer in too brief a compass is built directly on her many insights, while perhaps adding a few of my own.

The first verse of the story is filled with crucial information that will context the tale we are about to read. “In the days when the judges ruled, there was a famine in the land, and a certain man of Bethlehem in Judah went to live in the country of Moab, he and his wife and two sons” (Ruth 1:1). The time of the story is “when the judges ruled.” The last thing we heard about that time, indeed the previous verse to Ruth in our canonical Bible, reads, “In those days there was no king in Israel; all the people did what was right in their own eyes” (Jud.21:25). In short, the time of the judges was a time of chaos and anarchy, peopled by characters like the murderous Ehud and Jael, the vengeful Gideon, the foolish Jephthah, the over-sexed Samson, and perhaps most terribly the brutal Levite and his terrorized concubine. Setting Ruth’s story in that time, any reader might hold their breath, waiting for the next dismemberment or raunchy sexual escapade. Fortunately, absolutely none of that occurs, yet the story has more than its share of surprising and startling events.

“The famine in the land” is obviously a lack of food, but the word “famine” triggers also a sense of emptiness in the society that will soon be evident. The classic Israelite patriarchal family of father, mother, and two sons will all too soon be shattered, as the trip to Moab, a tiny community south and east of Israel, is marked by tragedy. First, husband Elimelech dies, and following the marriage of the two sons to Moabite women, the sons both die, and we are left with three women, the Israelite Naomi and her two Moabite daughters-in-law, Orpah and Ruth. It is a patriarchal disaster! No man for any of these three women! Talk about emptiness and famine!

Naomi soon learns after ten long years in Moab, that the Israelite famine has finally ended, and she determines to go home. After all, she is now woman, widow, and foreigner: three strikes and you are out! There is no hope for her in Moab; perhaps in Israel she might find some sort of solace. Naomi sets out alone for home, but soon realizes that the two Moabite women are following her. She will have none of that! “Go back each of you to your mother’s house. May YHWH deal kindly with you, as you have dealt with those dead men and with me. YHWH grant rest/security in the house of your (new and unknown) husband” (Ruth 1:8-9). In short, do not bother to accompany me to Israel where you will become as I am in Moab, namely, woman, widow, and foreigner. But the two girls refuse to leave her.

Naomi then resorts to a unique Israelite argument to convince them to stay in Moab. By custom, the Levirate marriage laws demand that in order to keep the male line alive in the community, and in part in order to protect the helpless widow in a patriarchal community, upon the death of a male spouse, a near relative—uncle, cousin—must marry the widow (see Deuteronomy 25:5-10 for a summary). Naomi claims to have no living relatives at all and paints the absurd scenario of her meeting a man that very night, which would require Orpah and Ruth to wait until the subsequent offspring of this random meeting had grown up before they were able to be married at all. Of course, by that future time, both Orpah and Ruth would be at least 15 years older and perhaps past the time of child-bearing. The whole notion is ridiculous! Orpah gets the point that Naomi has little interest in the girls and heads back home to Moab. But, on the contrary, Ruth “clung to her” (Ruth 1:14). That is the same verb used to describe the intimate relationship between the ‘adam and his woman at Gen.2:24. By using that verb, the reader gets the clear idea that Ruth has no intention of abandoning Naomi.

And her amazing and familiar speech that responds to Naomi’s repeated demand that she be left alone seals the certainty that Ruth is in the tale for the long haul. The continual use of this speech at weddings, either spoken or in song, has somewhat neutered its power, but it is an address of immense weight nonetheless. Ruth enjoins Naomi, “Do not force me to abandon you, or turn away from following you. Where you go, I will go; where you live, I will live. Your people shall be mine, your God mine. Where you die, I will die and be buried. May YHWH do whatever to me, and even more, if even death separates me from you” (Ruth 1:16-17). Ruth offers her apparently uninterested mother-in-law her present, her future, and her eternity, and gives no immediate reason why that is so. The speech silences Naomi (Ruth 1:18), but does not change her mind about the burden of this persistent female.

When they finally arrive at Bethlehem, the entire town is stirred at the return of Naomi who has been deeply scarred by her ten-year absence and nearly unrecognizable. She then offers a poem of her own, a poem that reduces Ruth to a cipher. “Call me no more Naomi (“pleasant” in Hebrew), but rather Mara (“bitter”), for Shaddai has dealt bitterly with me. I went away full, but YHWH has brought me back empty” (Ruth 1:20-21). Empty? What about that powerhouse Moabite standing nearby? At the end of the first chapter, we see a despondent and uncaring Naomi and an eager and deeply devoted Ruth. One can only slightly imagine how such a tale can end. Next week will provide such an end, and it will be a surprising one indeed!