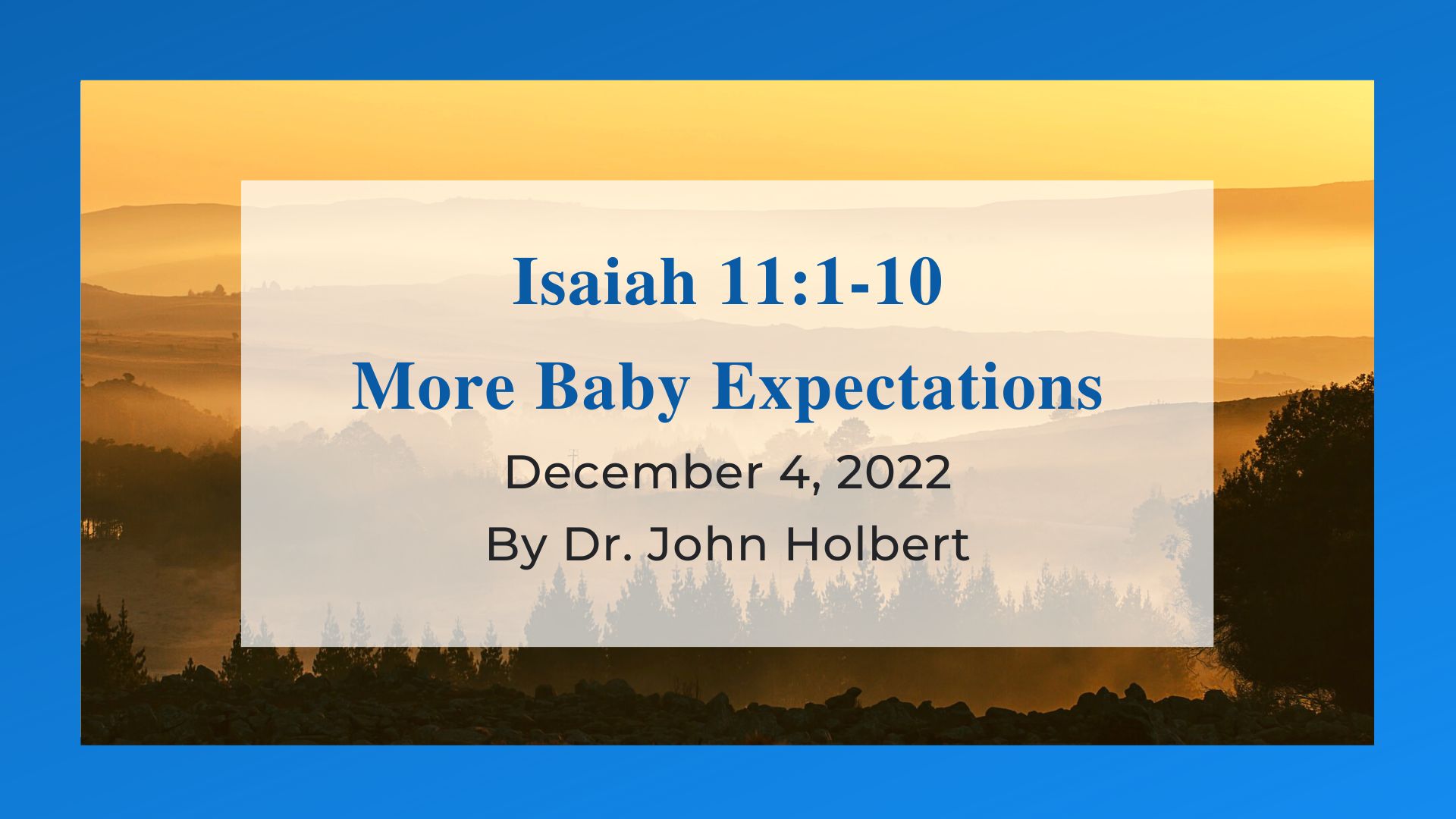 Last week, for the first Sunday in Advent, this year’s lectionary offered Is.2:1-5, that classic statement concerning the end of weapons and war. I suggested in that essay that such a radical idea was one way to think of what Christmas and the baby might portend. Could the embrace of the Holy Child urge us to cease our reliance on violence, guns, and mayhem, to address our world’s problems? Looking longingly at Is.2 may be one way to imagine the hopes of Christmas in new modes.

On this second Sunday of Advent, we read another famous passage from Isaiah, this one replete with familiar and wildly hopeful images concerning a bright and wonderful future with YHWH. It begins with a kind of mystery. “A shoot will grow out of the stump of Jesse, and a branch will spring out of its roots.” And just who is this “shoot,” this branch? Clearly, it is a hoped-for future leader in the mold of the great David, whose father was Jesse from Bethlehem. Whenever this text was composed—and there is little hope of ever knowing just when—the memory of King David had moved well beyond the salacious tales of the man found in the books of 1 and 2 Samuel. He now represents that fabled time in Israel’s past when the nation was a significant one, ruled by a mighty king, unified in its goals and religious culture. Whether or not that was ever true in fact is quite beside the point. Isaiah, or rather some later disciple of the prophet, uses David as the very model of leadership. In the same way that ancient David possessed “the spirit of YHWH, a spirit of wisdom and understanding, a spirit of counsel and strength, a spirit of knowledge and awe of YHWH,” (Is.11:2) at least according to this author, so shall this new shoot and branch reveal the same divine features.

“He shall not judge by what his eyes see, nor decide by what his ears hear” (Is.11:3). In other words, this marvelous leader will not be ruled by strict law codes nor by simple reference to physical evidence, but rather will be guided by “righteousness” toward the poor, “equity” toward the earth’s meek ones. This fabulous ruler will exercise openheartedness and compassion toward those who have seldom received it, but have been the playthings of the powerful. He will be clothed with the “belt of righteousness and faithfulness,” indicating that this one is guided strictly by actions that treat the poor and meek with deep care and rich grace.

As a result of this extraordinary activity on the part of the Davidic shoot, the entire world will undergo profound changes. “The wolf will live with the lamb; the leopard will sleep with the young goat; calf, lion, and full-grown sheep will all dwell safely together, while “ a tiny child will lead.” No longer will there be need for a shepherd, ever vigilant for the flock, fearful of predators. There will be no more predators, so even a tiny child will be an adequate guide. In the same way “cow and bear will graze, with their offspring sleeping together, and “the lion will eat straw like the ox” (Is11:7). In this paradisal scene, even a “nursing child will play over the hole of the poisonous snake, and a (slightly older) weaned child will put its hand right on the snake’s nest” (Is.11:8).

In short, as the author concludes his beautiful scene, YHWH says “they will not hurt or destroy on my holy mountain because the earth will be full of the knowledge of YHWH just as the waters cover the sea” (Is.11:9). The blessed picture, one that has energized countless painters and poets over the centuries, leaves us with the portrait of “The Peaceable Kingdom.” Such paintings and poems and stories have long been examples of hoped-for joyous places, places that too often seem little more than pie-in-the-sky delusions, cloud-cuckoo-land chimeras that mock our world of realpolitik, hard-core violence. However, just like Is.2’s portrayal of a world without war, so here we see again a world without violence, a world of harmony, both among humans and animals. Here once again is the promise of Christmas, the hope against all hopes that the world we inhabit can be different, better, peaceful, harmonious, and caring for all things. Christmas is far more than presents and glitter and trumpets and loud song. It promises a brand new world, a world not of more of the same, but a world that is free of violence and evil powers and gross separations among people.

Today is election day in the USA, and it promises to be one of fury and anger, and chaos. As the trite little ditty goes, “we need a little Christmas now,” but not that picture-post-card one of snow and sleighs and carolers, but the one found in Is.2 and 11. May that be the Christmas for which we hope and for which we strive this and every year.