Love Among the Flowers - Reflections on Song of Songs 2:8-13 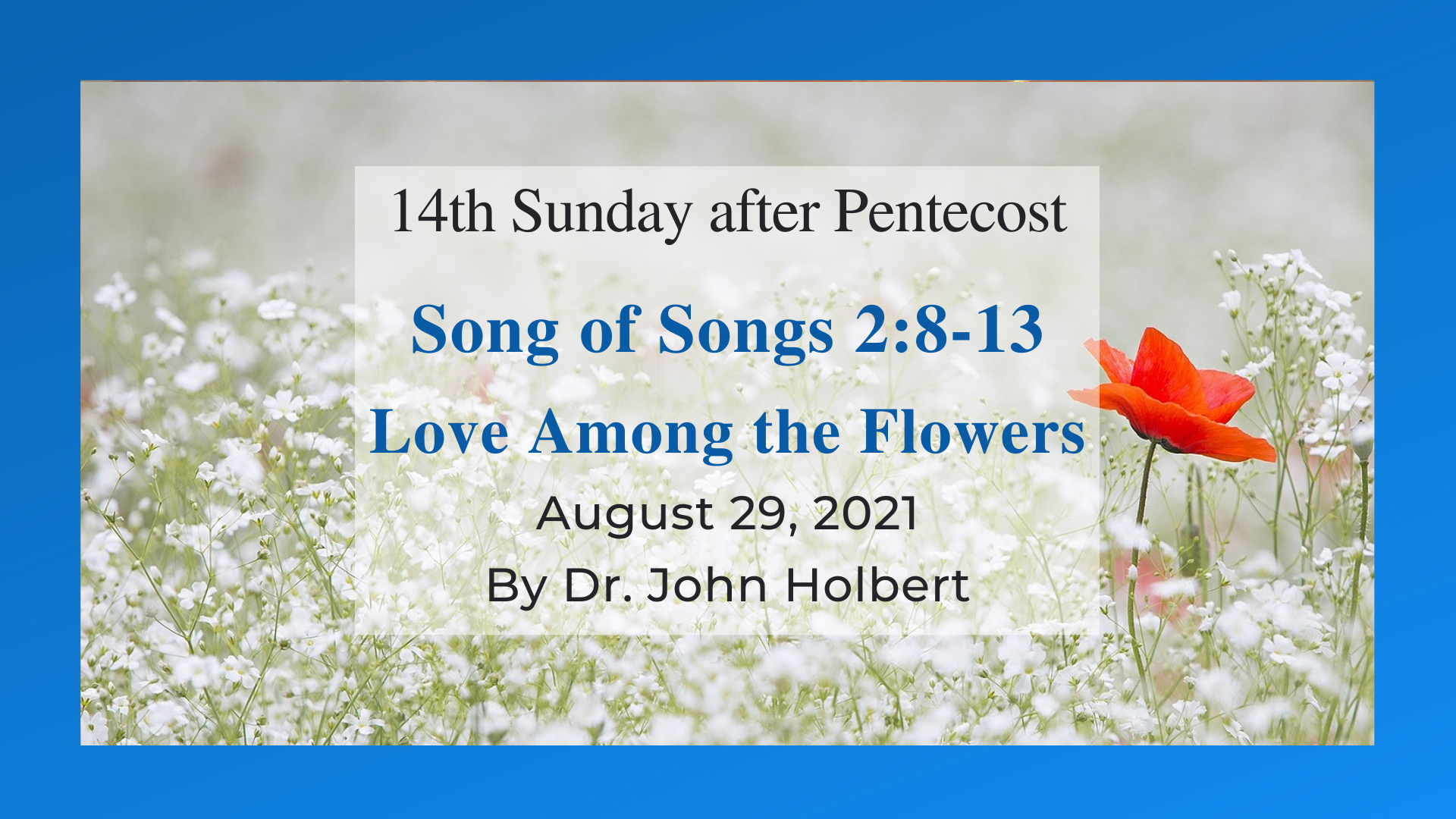 Love Among the Flowers

The rich poetic perfume of the “Song of Songs” has played very little substantial role in the ongoing theological life either of Jews or Christians. It has either been imagined to be a piece written by King Solomon, taking literally 1:1’s designation, coupled with the grand image of “the king on his couch” (Song: 1:12), or it has been read as an allegory, either concerning the deep affection of God for Israel (Jewish) or the amazing love between Christ and his church (Christian). As for the former, it is frankly absurd to argue that the 10th century BCE Solomon had anything to do with the composition of the poem, since among its vocabulary we find several Persian words, a language only available to the western part of the Near East several centuries after Solomon’s death (see, for example, the word “garden” pardes in Persian, whence comes our English word, “paradise”). As for the latter claims for allegory, that literary genre is, of course, without provability, since its interpretations are limited only by the imaginations of those reading. I am of the mind that allegorists—especially those of the early middle ages—were perhaps embarrassed by the frank and graphic sexual language they encountered in the book, and, because many of them were men dedicated to religious vows of celibacy and chastity, were more than anxious to discover ways to include the poem in their devotional lives while avoiding the sexual content of the words they were reading. This hardly is to say that these monkish males were devoid of sexual interests—many poems attest to some such interests (witness, for example, the famous musical setting by Carl Orff, “Carmina Burana” of several overtly lascivious ditties, apparently penned by some monks with too much time on their hands or too much wine in their stomachs!).

If the book was not composed by Solomon, nor is merely a thinly disguised allegory of one sort or another, then what are we Christian or Jewish preachers/ teachers to do with it? I suggest that we read it precisely for what it is, namely a wonderful and provocative love poem, proclaiming the joys and allure of human sexual love between a man and a woman. That is why, I believe, that the title is what it is: in Hebrew it should be translated “The Most Beautiful Song,” for the grammar of the phrase is one way of expressing the superlative in the language; there is finally, claims the title, no song to equal this song. Rather than resort to the laughable and ultimately risible allegorical ravings of overly imaginative monks (see, for example, the often hilarious “readings” of Origin or Gregory the Great, where the woman’s navel is “the baptismal bowl” and her “two breasts” are the two covenants of the Old and New Testaments), we need to hear the poem as a delicious paean to the intimacies of sensual and sexual love.

Yet, the true wonder of the poem may perhaps be best seen in its surprising and continual equality between the sexes. The Most Beautiful Song is not written to affirm and fix the notion of male dominance in the relationships between male and female, a common feature in the ancient world, to be sure. As Phyllis Trible has demonstrated in her 1974 article on the Song, found in her ground-breaking book, God and the Rhetoric of Sexuality, both the man and the woman in the Song are equally enamored of the other, are equally desirous of sexual intimacy, and are equally willing to risk public ridicule and humiliation to find sexual fulfillment with the partner. Both female and male employ extravagant and vivid descriptions of their respective beloveds, from head to toe, from hair to necks to teeth, to breasts to navels to vagina, no part of the human anatomy is off-limits for fully unforgettable poetic mention. When the poem is read with an eye out for intense and vibrant language to depict the human objects of desire, the Song can become a source of a delightful and rewarding and free depiction of human love that matches any in ancient or even modern world literature.

I know well that given the monumental sexual prudery of so much of 21st century US America, this despite the constant wash of sexualized imagery and language that our literature and images bombard us with each day, it will prove difficult if not possibly dangerous to bring such exotic and sensual words into the church, either in the pulpit or classroom. Yet, since the book is in the Bible, for goodness’ sake, or for God’s sake, it may offer an avenue to address any number of hot topics that have proven to seem off limits for the church. What about the virus of sex trafficking? What of the objectification of the female and male body? What about advertising’s employment of such objectifications to sell us cars or jewelry or soap? The Most Beautiful Song offers to us a superb and winsome portrayal of a sacred sexual relationship, a picture of a man and a woman lusting after one another with genuine human desire, announcing to all who read that such desire is not only fabulous and wondrous, but is also a desire born of God, even though the name of God is found nowhere in the poem. I commend the Song to you; it may serve you well as you ply the tricky sexual waters that flow in and around all human relationships. “The flowers appear on the earth; the time of singing has come, and the voice of the turtledove is heard in our land” (Song:2:12). Allow such serene and savory portraits to lead you into the luxurious land of the Song, and by its means offer to your congregation words of real beauty and pleasure, words that are surely as Godly and religious as any other to be found in our Scripture.