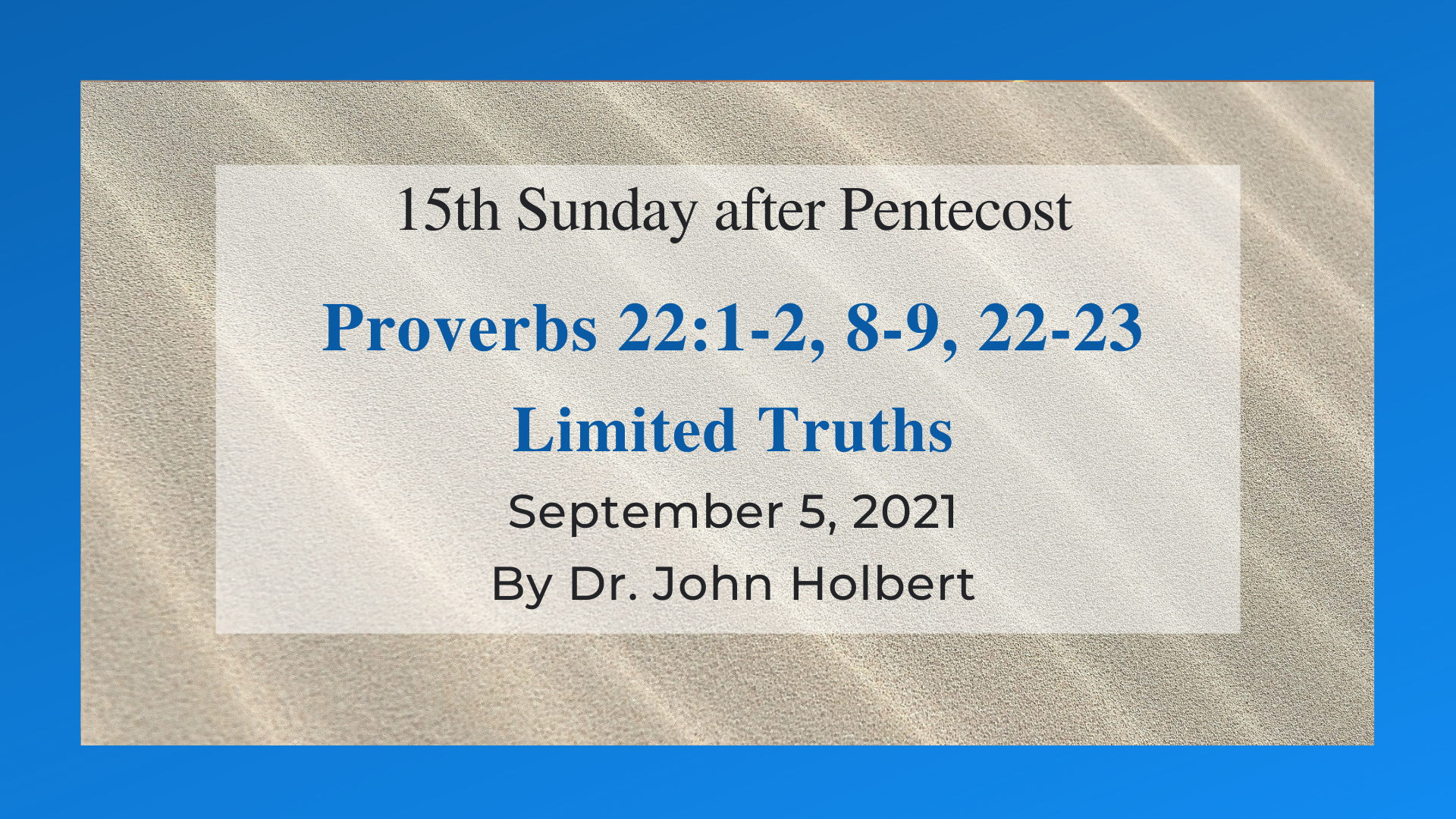 This Sunday and the following two Sundays offer to the preacher three chances to wrestle with the often enigmatic Book of Proverbs. In reality, the book we know as Proverbs is not as well named as it might be. The Hebrew calls it meshalim, which may indeed be translated as “proverbs,” as a terse sentence of popular wisdom, but which in actuality includes rather broader meanings. For example, sometimes the Hebrew term is used to complain that the speaker has become a “byword,” a “laughing stock” or “joke,” among people (see Ps.44:14; 69:11; 1 Kings 9:7, among others). Thus, we may conclude that what one finds in this book is hardly confined to wise sayings. In fact, next week’s lesson will give to us the figure of Woman Wisdom, while the third lesson for Sept.19 will offer a portrait of one known as the ideal woman. Short terse sentences of freeze-dried wisdom do not exhaust the material of the Book of Proverbs.

However, today that is precisely what we get, brief insights from Israelite society that purport to be true in that culture. However, it is fair to say that the truths of the sentences are only in the end limited ones, partial insights into life that too often are not found to exist in reality. Of course, we know for a fact that the wise sayings we have encountered in our lives are the same; they claim a truth that reality cannot always sustain. “A stitch in time saves nine,” suggests that early work on a project will prevent one from vast labor later, and sometimes that proves true. But other times, too early work, far from preventing long work later, rather adds to the need for even more later work to correct the too early work! Beginning to construct something before carefully reading the directions, regularly leads to much more work later—believe me, as one who has few if any skills for putting things together, I know all too well the partial truth of that line!

Still, the collector of these proverbs of chapter 22 enumerated them as “words to live by,” phrases that summarize truths to be learned and practiced. “Choicer is a name than vast wealth; good favor than silver and gold” (Prov.22:1). Proverbs in any culture often claim that money only goes so far; in the long run, it is always better to have a “good name” and “good favor,” that is to be honored and trusted by others. Perhaps. But money can surely solve a lot of problems, too! The next verse adds something to the meaning of the proverb: “Rich and poor meet; YHWH makes both” (Prov.22:2). The poor as well as the rich need to remember that they are both people of YHWH, who made them both. Of course, we might want to ask: did YHWH make them rich and poor, or did society create one rich and the other poor? Just when do rich and poor meet; when the former hires the latter for work that the former cares not to do but would rather hire the latter to do? Proverbs are like this; they often raise far more questions than they answer.

“Who sows wrongdoing will reap injustice, and the rod of his anger will fail” (Prov.22:8). This implies that when the wrongdoer gets his inevitable comeuppance, any power he has to harm others will come to an end. Of course, this implies that wrongdoers inevitably get what is coming to them. Do they? Hardly inevitably! Just ask Job! “The generous one will be blessed because he gave of his bread to the wretched” (Prov.22:9). Always? Hardly! Another more modern proverb comes to mind: “No good deed goes unpunished.” Just ask Job! Well, which is true? Both may be called perhaps partially true, if true at all.

Or how about this one: “Do not rob the wretched, for he is wretched; do not crush the poor in the gate, because YHWH will argue their case, and deprive those who deprived them of life” (Prov.22:22-23). The gate is the lower court of Israel where cases like that of theft are adjudicated by city elders as they head out to the fields for work (see Ruth 4 for a typical scene). Those who rob the wretched and deal falsely at law with the poor will be judged guilty by YHWH who argues on behalf of the wretched and poor. Really? Always? This proverb implies an ideal world of wisdom where the evil ones receive their just desserts directly from the God of justice. Would that it were so in our world or theirs, but we all know that such justice is not always demonstrated.

“A rolling stone gathers no moss” suggests that those who keep on the move will never be dragged down by unwelcome accretions. Then again, to stay in one place for a good while has many benefits, like stability, friendships, familiarity. Limited truth, partial accuracy. Proverbs are here designed to tease one into active thought, to think more deeply than simple repetitions of bumper sticker blathering. This is a lesson that every generation must relearn, lest we do nothing more than mouth what others have said. 2021 is surely a time when all such proverbs of so-called universal truth must be examined and questioned with great care. “Make America Great Again” and “Stop the Steal” come readily to mind, along with “Defund the Police.”  We, too, have our proverbs that bear at the very best partial truth only.