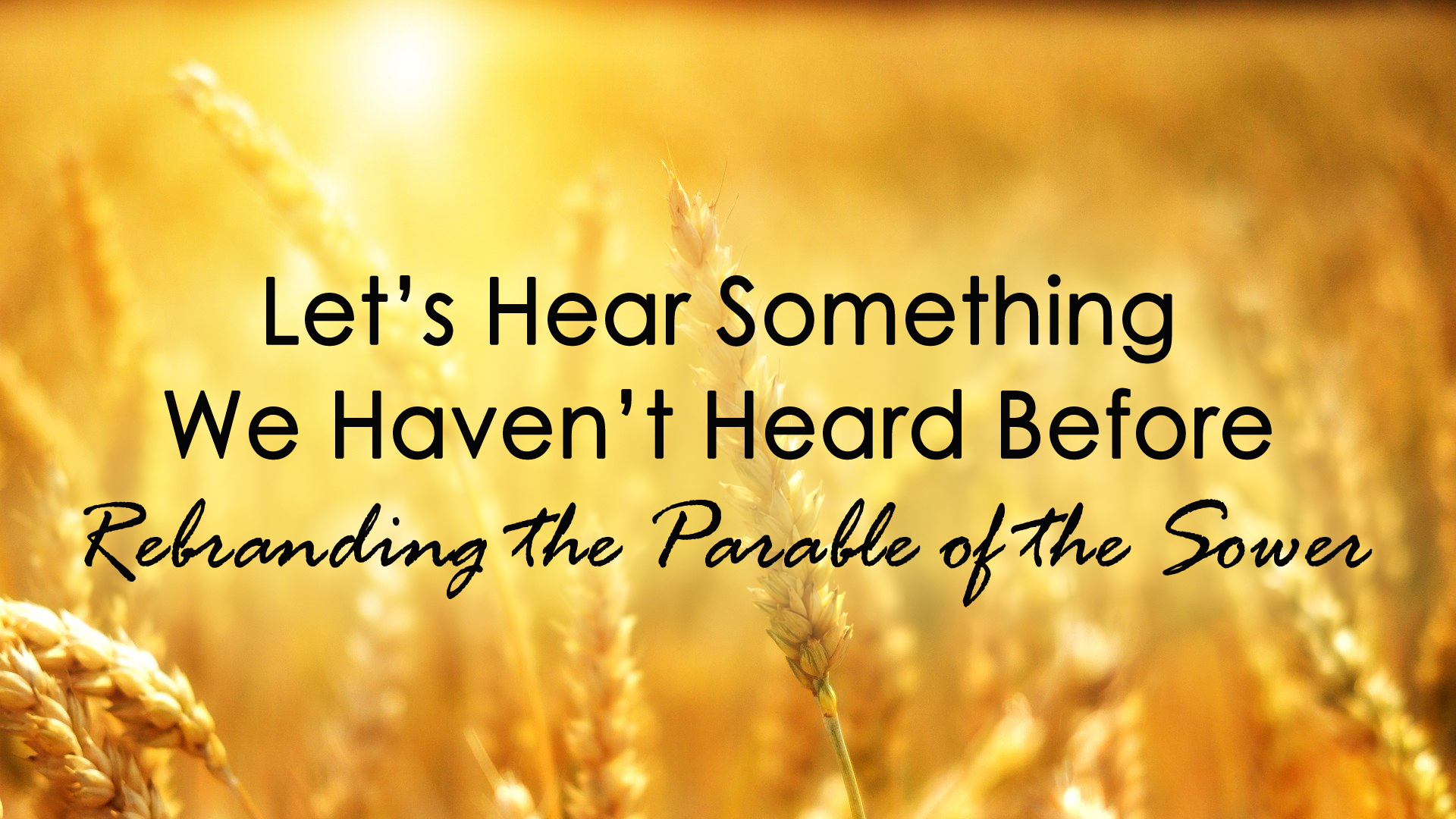 Let’s Hear Something We Haven’t Heard Before

Rebranding the Parable of the Sower

When my now grown son Matt was a boy, I would read him Bible passages every night. Every now and then, when we would return to a familiar passage, he would say, “Let’s hear something we haven’t heard before.”

We’ve all heard the parable of the sower many, many times before. How to rekindle interest? How about rebranding, the act of repackaging and renaming a product to make it more appealing? So prunes became “dried plums.” Diet Deluxe became Healthy Choice, and the Radar range became the Microwave.

Let’s try rebranding “The Parable of the Sower” and see if any new insights arise.

The Parable of the Careless Sower

The parable describes three failures of sowing: the seed on the path is devoured by birds (verse 4); the seed sown on rocky ground is scorched by the sun because it has no roots (vv. 5-6), and the seed sown among thorns is choked (v. 7). Some of the seeds fall on good soil and bring forth grain, some a hundredfold, some sixty, some thirty.” (v. 8) In the first 9 verses it sounds like Jesus is referring to himself as the sower and the seeds as his teachings. We could also interpret God as the sower, since God is the source of Jesus ‘teachings. Jesus is a careless, extravagant sower. Why would he let his teachings fall on the path, on rocky and thorny ground?

The Parable of the Miraculous Harvest

Biblical scholar J. Dominic Crossan emphasizes that it is not so much the size of the harvest that counts, but the fact that it happens at all. However big or small the harvest, against such opposition, there is a miraculous quality to it: it is a gift whose graciousness and surprise are meant to make us think of the kingdom of God.  By his view, we ought to rebrand this parable the “Parable of the Miraculous Harvest” (Donahue, 33).

The Parable of the Good Soil

Mark’s version, written in a time of persecution, focuses on comforting the vulnerable young community. A miraculous harvest of the seed can come even in adverse circumstances.

Matthew, written several decades later to a mixed community of Jewish and Gentile Christians highlights the need for the individual not to rest on their religious heritage as Jews or their freedom from the law as Gentile Christians, but to bear a harvest from the seed that falls on their soil. Each person needs to be a doer of the word and not only a hearer.

The Parable of the “Secret” Savior

Chapter 13 of Matthew’s gospel is the beginning of the “parables discourse.” It comes at a critical point in Matthew’s narrative. In chapter 12, Jesus has been under assault by his opponents. The Pharisees apparently are not good soil for his teachings to land on. They object when Jesus plucks grain and heals a man with a withered hand on the Sabbath (12: 1-14). When he cures a demoniac who was blind and mute (12: 22) they accuse him of deriving his exorcizing power from Beelzebub, the ruler of demons. (12:22ff) The Pharisees have ears but do not hear. Over against this opposition, the parables discourse affirms Jesus’ divine identity. He both teaches and embodies the mystery of the kingdom of heaven, (13:11), a mystery “hidden from the foundation of the world” (13:35) but now revealed at this dawning of the final age.

13: 10-15 is a confusing passage. It sounds like a clear statement that Jesus uses parables intentionally so that he can reach some and not others. The quotation in verse 12 is from Isaiah 6:9-10, the call story of Isaiah. Just after he accepts God’s call, Isaiah is told that his ministry will not be well received. In fact, it seems as if his calling is to preach to a faithless people. My interpretation is that “in order that” in verse 12 is better rendered “with the result that.” A typical construction in Hebrew is to use a command to express a result. Jesus is not saying he uses parables deliberately so some will be excluded. He is saying that some will see and hear, but will not, at a deeper level, understand and take his words to heart. (Thurston, 51)

Verses 10-15 are not a statement of divine intention that some not hear. They are a description of the mixed reception of any prophet’s life and teachings, whether Isaiah’s, whose words these verses cite, or Jesus’. The “secrets of the kingdom of God” referred to in verse 11 are the cross and resurrection of Jesus Christ, a real-life parable of the victory of God’s kingdom over circumstances in which death and failure seem to have had the last word.

The parables discourse in Matthew 13 explains why, despite Jesus’ manifest identity as the Messiah, his opponents do not respond positively to him. Their obstinate disbelief and dullness of heart mirrors that which Isaiah prophesied (13:10-15). They do not open their minds and hearts to the parables, but rather, allow them to compound their misunderstandings. By contrast with Jesus’ opponents, the disciples in Matthew are the blessed recipients of the mystery of the kingdom, something the prophets and just ones of old longed to see 13:16-17. (Senior 159-160)

Unlike in Mark, where the “duh ciples” never learn much of anything, in Matthew they do “understand” Jesus and his teaching. In the parables of Matthew Chapter 13, Jesus reminds the disciples of the exceeding value of the kingdom and the necessity of total commitment to it.

The seed parables point us to hidden realities whose power and activity will one day be manifested. They remind hearers and readers of Jesus, whose power was hidden on the cross, glimpsed in the resurrection, and is now growing steadily in the world despite the appearance of initial failure and repeated rejections of Church’s ministry and message. Matthew, as well as Mark, uses the seed parables to define discipleship as hearing, accepting and bearing fruit, following the way of Jesus that yields a bountiful harvest.  Says biblical scholar John Donahue, “The miracle and mystery of growth provide a polyvalent cluster of images which evokes God’s power and graciousness in all areas of life”(Donahue 51).

The parable of the careless sower, the miraculous harvest, or the good soil or the secret Savior? Whichever one(s) you pick, “let’s hear something we’ve never heard before!”

John Donahue, The Gospel in Parable: Metaphor, Narrative and Theology in the Synoptic Gospels (Fortress Press: 1988).