Joy Without Context - Reflections on Baruch 5:1-9 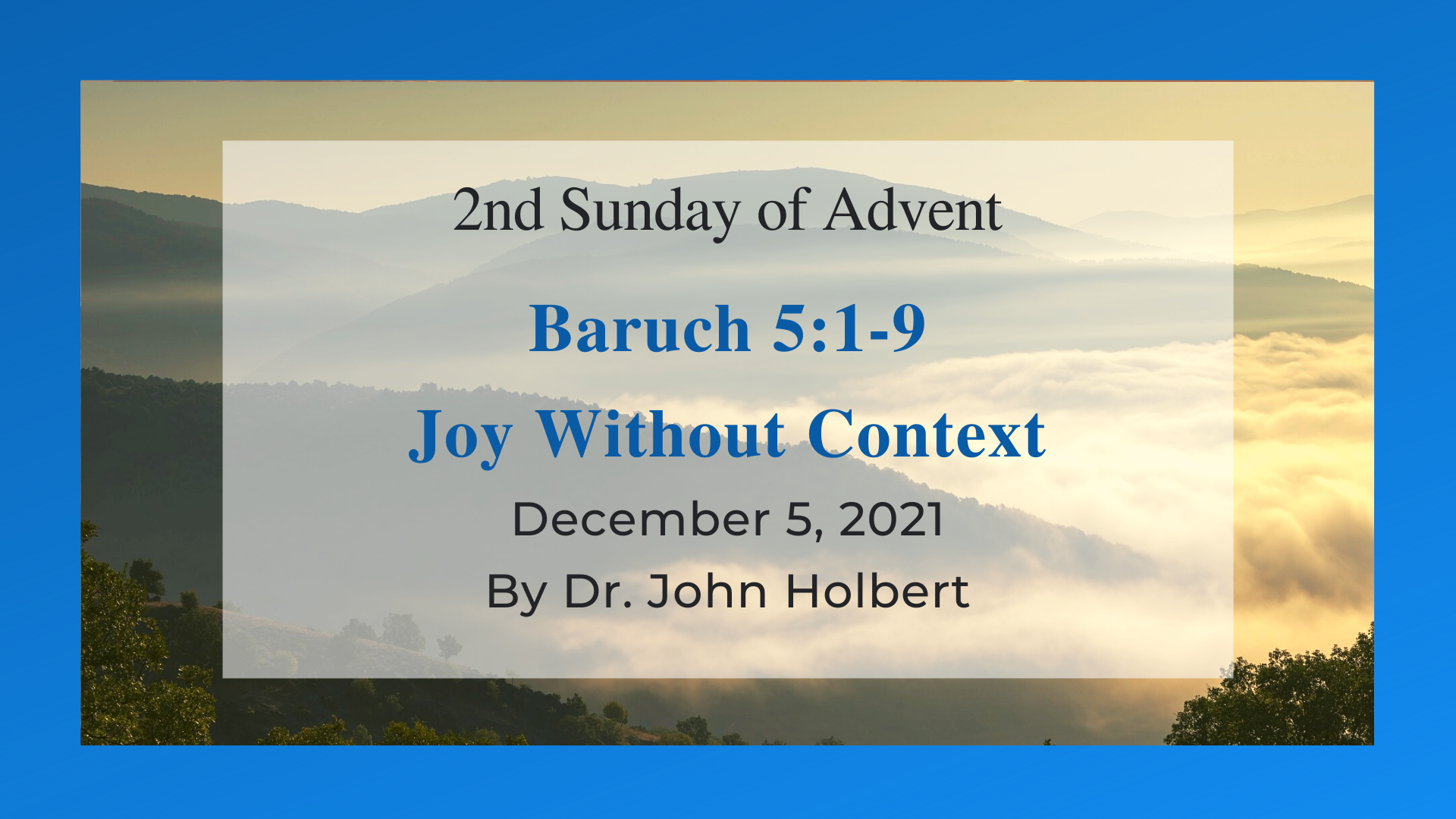 Joy Without Context - Reflections on Baruch 5:1-9

Today the lectionary serves up a genuine rarity: a text from the Apocrypha, Baruch 5:1-9. Not only is this text outside of the traditional canon of Hebrew Bible scripture, it also is a deeply contested piece of literature, available to us only in Greek, though nearly every scholar is convinced that there is a Hebrew original, thus far undiscovered. Not only that fact makes the text problematic, but also there is absolutely no agreement concerning when the thing was written. Guesses as early as the 5th century BCE and as late as the 1st century BCE have been offered. In short, we are today reading a text that possesses no certain historical context, and that appears in a translated guise only. These realities make its fuller understanding exceedingly difficult, especially as it finds its lectionary location in this second Sunday of Advent. Little wonder that most preachers will rush to the New Testament with even more alacrity than usual!

Still, I want to make a case for a closer look at Baruch and its rich poetic expression in chapter 5. Let’s begin with what little we can surmise about the book’s history, the better to place a possible context for the piece. After all, without historical context, it is very problematic to employ a text with confidence for this holy season. The book begins with obvious, if understandable, contextual inventions. “These are the words of the book that Baruch, son of Neriah son of Mahseiah, son of Zedekiah, son of Hasadiah, son of Hilkiah wrote in Babylon…” (Baruch 1:1). The idea that the famous secretary of the prophet Jeremiah, mentioned numerous times in that book, actually wrote these words plainly cannot be true. Moreover, the time of the writing, given to us as “the fifth year, on the seventh day of the month, at the time when the Chaldeans took Jerusalem and burned it with fire,” the very day of the sack of Jerusalem by the armies of Nebuchadnezzar (582/581BCE), is improbable in the extreme. Very like the book of Daniel,  supposedly set in the 6th/5th century, but in fact written during the Maccabean revolt of the 2nd century, so the book of Baruch uses a fictitious historical context to increase the value and verisimilitude of its composition, as many other apocryphal books tend to do.

In short, we cannot know with any certainty the time of the writing of this book. What we can guess is the impact the writing had and hoped to have on generations of readers. With that possible impact in mind, we may turn to Baruch 5:1-9. Immediately, the words have a familiar ring. “Take off the clothing of your sorrow and affliction, Jerusalem, and put on forever the beauty of the glory from God” (Baruch 5:1). After the fall of Jerusalem in the 6th century BCE, poets of the succeeding centuries all longed for the rise of that great city from the ashes of its destruction. As we noted in last week’s lection from Jeremiah 33, that poet hoped that Jerusalem’s future name would be “YHWH is our righteousness.” This poet from Baruch hopes also for a new name for the holy city: “Righteous Peace, Godly Glory” (Baruch 5:4).

In vss.5-6, the poet recalls images from earlier bards who pictured the remnants of Jerusalem standing on the heights around the city, gazing longingly for the return of those who had been exiled long before: “see your children gathered from west and east at the word of the Holy One, rejoicing that God has remembered them” (Baruch 5:5). God will make their return from exile possible by immense divine action, reminsicent of the famous words from Isaiah 40: “For God has ordered that every high mountain and the everlasting hills be made low, and the valleys filled up to make level ground, so that Israel may walk safely in the glory of God” (Baruch 5:7). The lovely tenor sounds of Handel’s “Messiah” ring again in this marvelous image of divine power and provision.

In addition, the end of Isaiah’s great words of hope concerning the gifts of the trees “clapping their hands” in joy (Is.55:12-13) is echoed here as “the woods and every fragrant tree have shaded Israel at God’s command” (Baruch 5:8). And the poet ends with this marvelous portrait of God’s leading: “For God will lead Israel with joy, in the light of God’s glory, with the mercy and righteousness that come only from God” (Baruch 5:9). Baruch’s reiteration of several of the grand images from earlier prophets of Israel, reinforce and make sustainable the convictions of God’s promises to the people down through the ages. It is as if Isaiah and Jeremiah have a younger spokesperson to emphasize and renew the unfailing hopes that one finds in God, no matter what the historical circumstances may be. And so it is with another Advent season. Once again, we hope for and long for the coming of the Christ child who comes to us in “mercy and righteousness,” long promised in the Hebrew Bible and echoed in Baruch, whenever it may have been written.