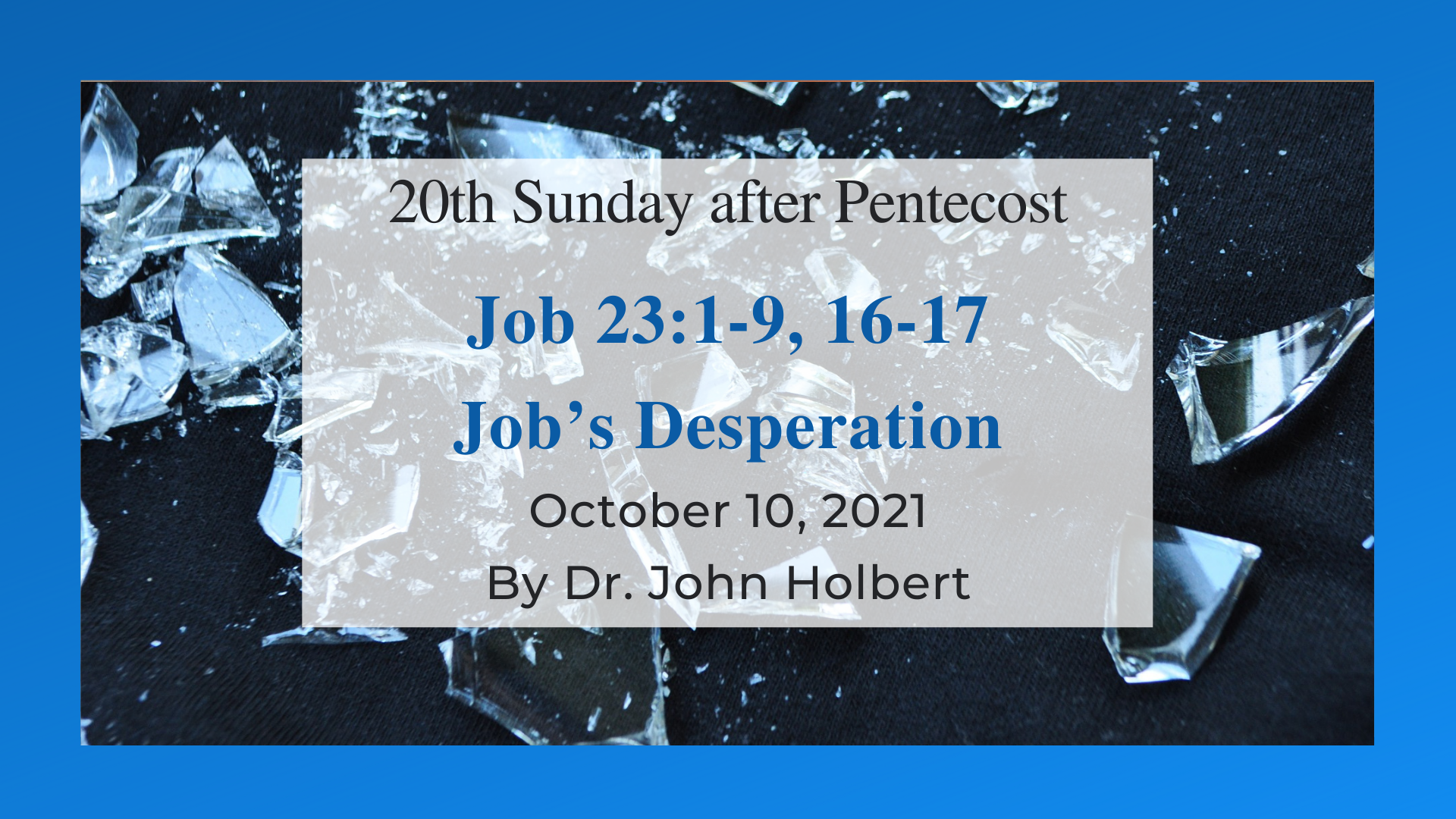 I have always been at a loss to understand why the collectors of the lectionary always choose these particular texts as the second installment of our look at Job. They, and we, jump from the prologue of Job 1-2 right to the near end of the dialogue between Job and his so-called friends. In fact, we get exactly none of the rich and fractious debate between our hero and his ultimately useless interlocutors. As such, it is crucial that we understand just where we are in the arc of the tale when we arrive all the way at Job 23.

Job in his long and painful speech of chapter 3, bewails the horrors of his situation, ultimately demanding to know just why it is that life and light are granted to anyone whose condition on a heap of ashes rather forces them to long for death, to “rejoice wildly when they find the grave” (Job 3:22)? This speech apparently pricks Eliphaz to reply with a long address that resembles an evangelical sermon to Job, who appears to Eliphaz the foulest of sinners (why else would he be on an ash heap anyway?), a sermon that concludes with a straightforward demand for Job to follow Eliphaz’ way to the letter, a way based on the strict belief that God always and without fail rewards the righteous and punishes the wicked: “See, we have searched this out, and it is true; Hear, then, and know it for yourself” (Job 5:27).

But Job is hardly so easily persuaded, proclaiming in his response to Eliphaz that his pain is all too real, his angry words the result of the terrible fact that “the arrows of Shaddai are in me; my spirit drinks their poison; the terrors of God are arrayed against me” (Job 6:4). God is hardly for Job any more the source of his hope or succor; God has become Job’s enemy, and for reasons completely unknown. And thus is the dialogue established. Job, just as the friends, believes in a God of reward and punishment, but while they think that God is punishing Job for some unexpressed evil, Job thinks that God has in this case somehow made a grievous mistake in the divine calculous. “Am I the god of the Sea, or some Dragon, that you seek to muzzle me?” he demands of God (Job 7:12). I am merely Job, God, not some monstrous adversary that requires divine attack. And so the dialogue continues, growing ever more ugly and fractious, with Bildad noting, disgustingly, that “if your children sinned against God, God has delivered them (rightly) into the power of that transgression” (Job 8:4), explaining the death of Job’s children in the prologue as due dessert for their evils. And later Zophar will quip to the sufferer that “God exacts of you less than your guilt deserves,” (Job 11:6), assuming perhaps that Job will soon be relieved of his broken piece of pottery and his smelly robe! And the third friend then crows, “A stupid person will gain understanding, on the same day that a wild ass is born human,” (Job 11:12), a colorful way of saying “never.”

The debate descends into invective, a schoolyard brawl, with each friend, in turn, excoriating Job for his hidden evils, and Job calling them “worthless physicians,” among other things, and turning toward God as an arch sadist in the sky, “who destroys both blameless and wicked,” while “mocking the calamity of the innocent” (Job 9:23). It is a painful dialogue to read, a debate that cries out for some sort of resolution, but whose possible resolution is delayed almost beyond endurance.

After Job summarizes his belief that God in fact does not reward the righteous or punish the wicked with a lengthy list of the many ways that simple observation proves that belief a filthy canard (Job 21), he returns to the notion that he earlier presented that he wanted to talk to God in order to discover why his life had become the horror that it obviously now is (see Job 9, especially). “If only I knew where I might find God, that I might even come to the place where God lives,” he cries (Job 23:3). If he could see God face to face, “he would lay his case before God, would fill his mouth with arguments, would learn God’s answer, and understand what God would say” (Job 23:4-5). Job believes with an assurance that “an upright person could reason with God,” and after the case has been argued Job is convinced that he “would be acquitted forever by my judge” (Job 23:7). We remember all too well that Job is right to call himself “upright” since that is the very word used to describe him twice in the prologue (Job 1:1, 8).

But he concludes this burst of hopeful imagination with the certainty that he cannot find God at all (Job 23:8-9), and because that is all too true he ends this speech with the fearful cry that “God has made my heart faint; Shaddai has terrified me. I wish I could vanish into darkness, and that a thick gloom would cover my face” (23:16-17). Job spends a great portion of the debate with his friends exploding in fury at them and at God, but then falling into despair when he realizes that God is powerful and awesome and is not easily a conversation partner with any human, nor is likely to receive contradiction gladly. Job is convinced he is in the right, and that God is in the wrong when it comes to the full justice of the universe. It appears more than obvious that the discussion can only end with an appearance of God, and so it happens. But exactly what God appears to be will only be available to us in next weeks’ texts, Job 38ff. For today, we may only stand apart from the sufferer, realizing that his friends have failed and that he remains ignorant of the fuller meaning of God’s and humanity’s justice. Whether God’s impressive speeches to come will satisfy Job’s, or our, thirst for the truth remains to be seen.