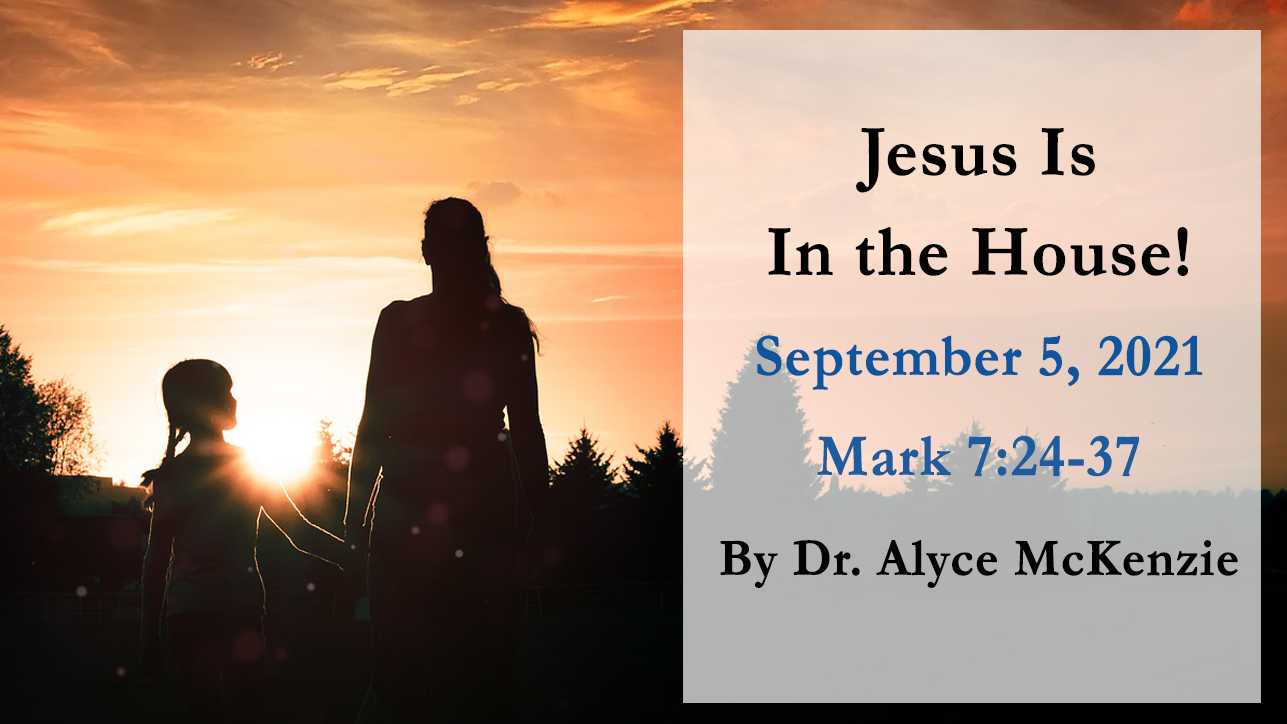 If today is like every other day, she knows what to expect before she even enters the dark, cool house from the heat of the day. Fresh slashes of graffiti on the walls she painted just yesterday. Jagged shards of crockery, strewn on the kitchen floor waiting to cut her feet. Screams and curses cutting through the air.

Strange, but so far no slashes, no shards, no screams . . . she steps slowly into the bedroom, pushes the curtain aside; no sound of limbs thrashing on the bed. She steps in to stand next to the bed. There lies her little daughter, her eyes closed, her little face finally peaceful, and her body at rest. The girl opens her eyes and smiles up at her mother who, as she sits down next to her daughter on the bed, sees that the demon is gone.

What jump starts this story is Jesus crossing the boundary into the territory to the west and north of Galilee, whose residents included Jews and Gentiles. I think he wanted to meet Gentiles, to spread the message beyond the Jews. Mark's church in Rome was made up of Gentiles. It would not exist if Jesus had not set out and gone to the region of Tyre. The last scene would never have happened. The woman would not be sitting on the bed next to her smiling daughter if Jesus had not gone to Tyre.

Somebody noticed that Jesus was in the house and pointed him out to her.

In another time and place, somebody noticed Jesus was in the house and told John Wesley. It was his mother Susanna. Each morning the walls of the rectory at Epworth where John grew up resounded with the sounds of daily prayer and scripture reading. Susannah had a lot of children, but she would not allow any of them to fail to notice that Jesus was in their house. She had a weekly schedule of private talks with each child, their time with mother: on Monday, with Mollie; on Tuesday with Hettie; on Wednesday with Nancy; on Thursday with John; on Friday with Patty; on Saturday with Charles; and on Sunday with Emilia and Sukey. As a grown man, Wesley wrote his mother saying, "I wish that we could continue our weekly meetings. I do not doubt that they would be as useful now for correcting my heart and forming my judgment as they were then" (Collins, 19).

What if she had not had faith enough that Jesus could help her to even ask him? But she did. I wonder where it came from. She hadn't met him before.

I guess that doesn't matter. All you need is a little bit of faith, and faith is a gift from God. We don't have to earn faith. John Wesley, the founder of the Methodist movement, in one of his sermons (Works, 5:85), told his listeners "Faith is not . . . a mere assent to the truth of the Bible, of the Articles of our Creed, or of all that is contained in the Old and New Testament . . . But it is, over and above this, a sure trust in the mercy of God, through Christ Jesus. It is a confidence in a pardoning God."

She had a crumb of confidence and that was enough to make her persist. Even when it seemed like he was disrespecting her, since he was a Jew and a rabbi and a man and she was a three-strikes-you're-out kind of person: a Gentile, a woman, and a woman with a daughter who had a demon. In Jesus' day, her daughter's debilitating illness or seizures, which the text calls demon possession, would be viewed by some as a punishment for sin. He called her a dog, using the term of derision commonly used by Jews to refer to Gentiles as unclean. In her desperation, she comes back at him with a wise retort that revealed she was not a dog, but a lioness: "Sir, even the dogs under the table eat the children's crumbs" (7:28).

Was he disrespecting her? Or was he using a rabbinic method of matching wits to teach those standing around that his message was for Gentiles as well as Jews? We have no clues as to his affect. But three things come to mind for me:

So strong was her desire for her daughter's healing that she dared to match wits with Jesus. "Sir, even the dogs under the table eat the children's crumbs."

She still has the trip home toward the final scene that would never have happened if Jesus had not gone to Tyre, if someone had not let her know Jesus was in the house, and if she had not had just a crumb of faith to persist in making her request.

But Jesus had come to Tyre, and Jesus was in this house, and someone did bring him to her attention, and she did have faith enough to persist, and he did grant her request.

And so she opens the door, almost afraid to push it open, tempted to stay on the stoop. If this homecoming is like every other one, she knows what to expect before she even enters the dark, cool house from the heat of the day.

Yet, so far no slashes, no shards, no screams. She steps slowly into the bedroom, pushes the curtain aside—no sound of limbs thrashing on the bed. She steps in to stand next to the bed. There lies her little daughter, her eyes closed, her little face finally peaceful, and her body at rest. She opens her eyes and smiles up at her mother who, as she sits down next to her daughter on the bed, and sees that the demon is gone.