In the Wake of Charlottesville… Not Enough 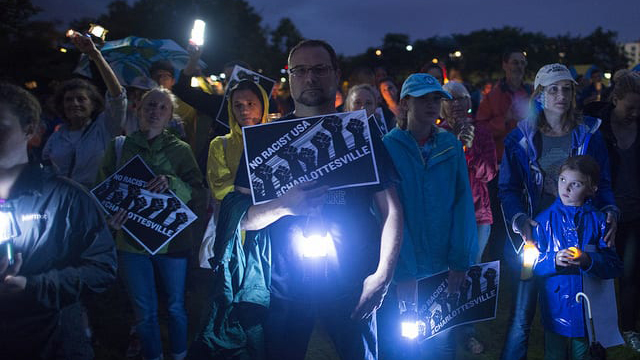 First off, a confession: I am a white man.

As an American and a Christian I have been utterly disappointed and disgusted by our president’s response to last weekend’s event in Charlottesville. As everyone who has followed the presidential pendulum knows, on Saturday, August 12, President Trump blamed “many sides” for the violence that ensued and climaxed in white supremacist James Fields ramming his car into a crowd of counter protestors resulting in a dozen people being injured and Heather Heyer’s death. After some criticism, on Monday, August 14, Trump read a prepared statement that condemned racist violence without placing any blame on the side of activists. On Tuesday, August 15, at a press conference in which Trump intended only to address new infrastructure plans, he responded to journalists’ questions about Charlottesville with fire and fury by reasserting that there was “blame on both sides” and that there were “some very fine people on both sides” even though he continued to condemn white supremacists, the KKK, and Neo Nazis. Since then his tweets double and triple down not on condemning white supremacy but on supporting them.

In contrast to my frustration with President Trump’s lack of a moral vision in responding to Charlottesville, I have been pleased to see the widespread responses by political leaders (Democrats and Republicans), celebrities, late night hosts, pastors, bishops, business leaders, and even international voices condemning the white supremacists, Ku Klux Klan, Neo Nazis, and white nationalists. The kind of blatant and violent white supremacy emboldened by Donald Trump’s campaign and election must be resisted, countered, and conquered…and it seems that the only ones unwilling to do this are the white supremacists themselves (including our president).

Still, these condemnations have not gone far enough… not nearly far enough. To use Paul Ryan as an example, he tweeted in response to Trump’s press conference on August 15, “We must be clear. White supremacy is repulsive. This bigotry is counter to all this country stands for. There can be no moral ambiguity.” I single out Ryan’s tweet not because it is unique but because it is typical, and I am pleased to see someone in Trump’s own party saying No quickly and firmly to any attempt to draw any type of moral equivalency between the two sets of protestors in Charlottesville this weekend. Yet, this type of condemnation is easy.

What I mean is that it is easy for any decent white person to reject those who spout loud, radical, explicit hate speech and who promote violence and act violently in enforcing their racist, terrorist ideologies. What is harder…and necessary…is for white leaders not only condemn white supremacy but also to condemn and speak honestly about white privilege. White privilege is the foundation of white supremacy. It is easy to condemn those who are white supremacists while silently living out the privilege of being white in a racist society. After all, even James Murdoch of Fox News did this in spite of the fact that long time Fox News commentator  Bill O’Reilly explicitly criticized the left for wanting “power taken away from the white establishment” and for arguing that “white privilege in America [is] an oppressive force that must be done away with” as part of his support for Trump’s candidacy during the election.

How different would our national conversation be right now if the Republican speaker of the House had tweeted, “We must be clear. White supremacy is repulsive. I commit myself to leading the House of Representatives in seeking a legislative agenda that dismantles institutionalized and implicit white privilege that provides a fertile soil for such hate speech and violence to thrive!” No one would be talking about Trump’s response anymore because serious conversation does not suffer fools.

I am naïve enough, however, to believe that the white majority of preachers who are called to proclaim the gospel of Jesus Christ can find the faith and trust in the God of all humanity to do just this. I am speaking of white leaders and white preachers because leaders and clergy who are person of color have been doing this for generations. It is time for those of us who benefit from white privilege to join them in declaring its evil and sinful nature.

Indeed, confession is the starting point for discussing white privilege in sermons. As opposed to condemning racism “out there,” sermons by white preachers that will have the potential to lead congregations through repentance to social action will likely begin with honest self-reflection (“in here”) about the various ways we have benefited by being white in a racist society. We may not have participated in direct discrimination of people of color, but we have been able to climb higher on the societal ladder thanks to others being forced to occupy lower rungs.

When we white preachers admit that we have benefited from racist structures perhaps even while despising them, our white congregants will be able to admit their participation in ongoing, systemic white privilege as well. Then they will be able to recognize that the opposite of privilege is oppression and that while they are not protesting with Neo Nazis and the Alt-Right they have been living on the side of the oppressors. And then they will pray for forgiveness. And then they will work for change.

Of course, I am not naïve enough to think one or two sermons by one or two preachers will reverse generations of ingrained ways of thinking and acting much less overcome the heightened level of explicit hate in the current cultural atmosphere. But I am naïve enough to believe that if enough preachers start to discuss white privilege pastorally and prophetically, God’s word will not return empty.

So, when it comes to white pulpits being silent about white privilege …enough is enough. Let’s get talking. Let’s start preaching.