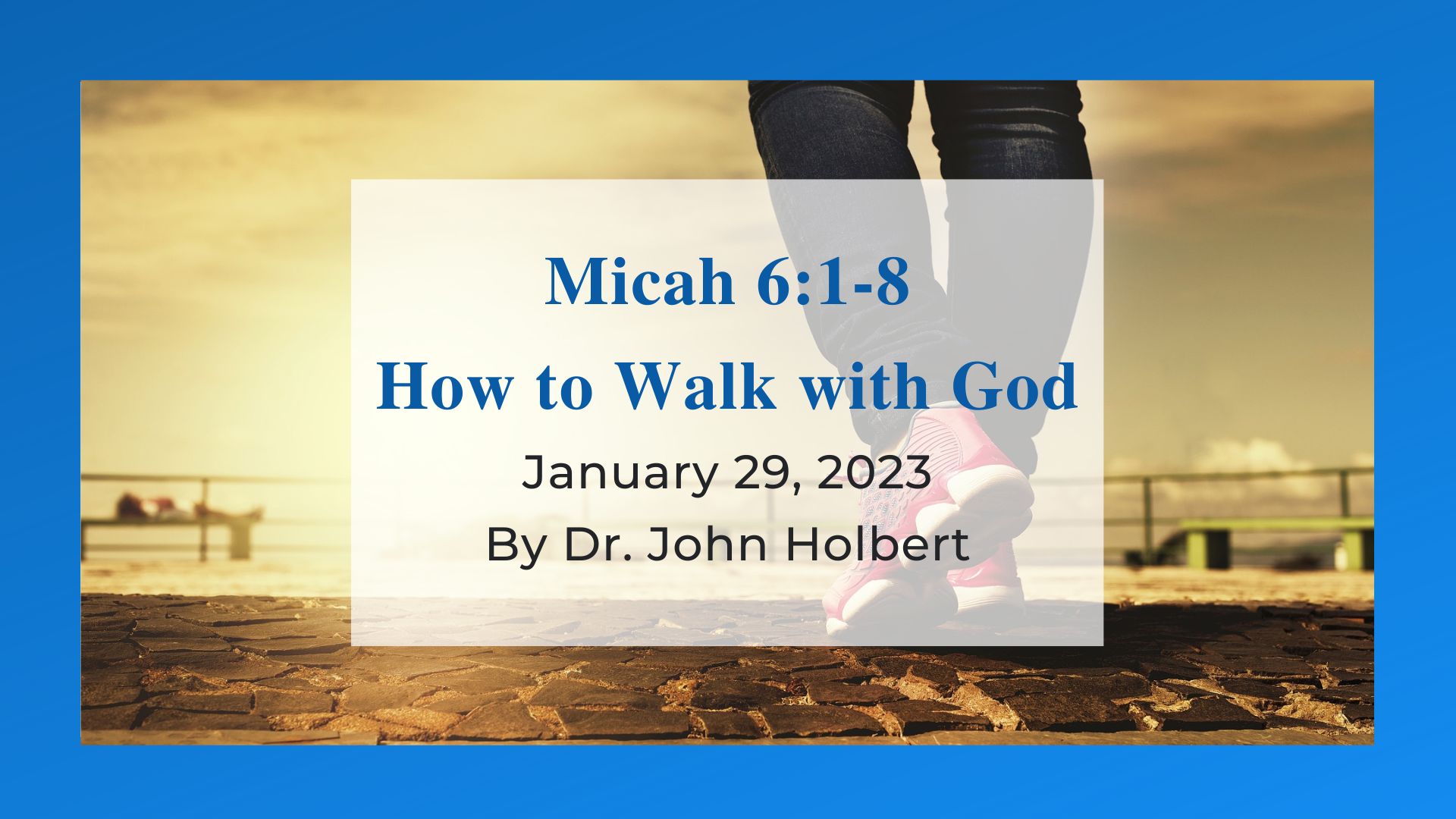 How to Walk with God

There is hardly a more well-known passage from the Hebrew Bible than this one from the prophet Micah. During the 20th century’s movement for African-American civil rights, Micah 6:8 became nothing less than the epitome of the work of Dr. Martin Luther King, Jr. In fact, the passage was so closely identified with Dr. King that a plaque at a Dallas, TX transit stop quotes the passage, and actually attributes the words to him; on that plaque, there is no mention of the prophet Micah at all! But just to make it clear, Micah did write the words, or at least they are attributed to him by those who may have collected his oracles into the book now bearing his name. And their use by Dr. King deeply enshrined them into our conscience. Nearly every churchgoer would readily recognize Micah 6:8 even if they might not be certain of their origin.

Because of their widespread familiarity, I hesitate, at least slightly, to suggest that the way the words have been translated and remembered may not finally be altogether accurate, however beloved they have become. We all remember the verse as follows:

God has told you, O mortal, what is good;

And what does the Lord require of you

But to do justice, love kindness,

And to walk humbly with your God? (NRSV among many other translations)

In older less inclusive readings, we hear “O man” for “O mortal,” but the rest remains quite similar to the NRSV translation. However, for me, three words in this famous verse need a closer look.

The first of those words is “require.” This is certainly not a mistake in translation, but I think the more literal reading of the Hebrew word adds weight to the verse. The word used means in most cases “seek.” It is the word from which the famous word “midrash” comes, that word that means “exposition” or “interpretation” that formed the basis of a huge corpus of rabbinic commentary over many centuries. God, Micah 6:8 says, seeks from us the interpretation of what we are being called to do for God. This contrasts sharply with earlier ideas expressed in Micah 6 that suggest that what God really wants from us are “burnt offerings” consisting of “thousands of rams” and “ten thousand rivers of oil.” Or, uping the ante horribly, it may be that God demands from us the sacrifice of our firstborn children (Micah 6:6-7)! These human interpretations of God’s will are finally ridiculous and monstrous. Micah 6:8 expresses what God actually seeks from us, the proper interpretation of God’s central demands.

The second word is translated by the NRSV, along with most earlier readings, as “kindness.” This plainly will not do! Because synonyms for “kindness” are “friendliness” or “kindheartedness” or “goodnaturedness” or “decency” or “generosity,” or other similarly pleasant and nice characteristics of a genial member of the community, that translation clouds over completely the powerful word that is used here. That word is the famous Hebrew chesed, a word that simply does not mean “kind”! It is a difficult word to render into English, but I would read it “unbreakable connection.” It is the word most often employed when speaking of God’s continual relationship to God’s people, a connection that is in the end unbreakable, no matter what foolishness or evil that the humans get up to. God asks us to “love God’s chesed,” that is to live our lives in the certainty of God’s desire to be in covenant with us. In other words, if we “do justice,” that search for equity and shalom among all people, the result will often bring antagonism and rejection by those who are concerned not with equity but with self-serving actions. Thus, we must “love chesed” if we are to persist in the work of God in the world, a work that is not always easy or comfortable.

The third word is the most difficult of the three and may bring about the most controversy. “Humble” has such a nice religious ring to it, that it is difficult to imagine any other translation. But let me be clear: the Hebrew is rare; but it is true that the use of the word in Proverbs 11:2 could be heard as “humble,” if seen as in contrast to the word “pride” in the same verse. However, our oldest commentary, the 3rd century BCE Greek translation, does not read anything like “humble” here, but something rather more like “be ready/willing.” Thus, we might read “walk willingly with your God.” It might also mean “certainly” or “carefully,” that is to say with a will and a certainty pursue justice and hold fast to God’s connection to you.

I fear that Micah 6:8 has taken on something of the sound of a cliche. “Be kind and humble” is what God seeks from you. Hardly! What God appears to seek here is the concerted work toward justice, based on the certainty of God’s connection, pursued diligently and persistently. Micah 6:8 then becomes more marching orders from the God of justice, precisely as Micah’s fellow prophets announced in their own oracles. And because the text is being read in the season of Epiphany, these marching orders come from Jesus, too!