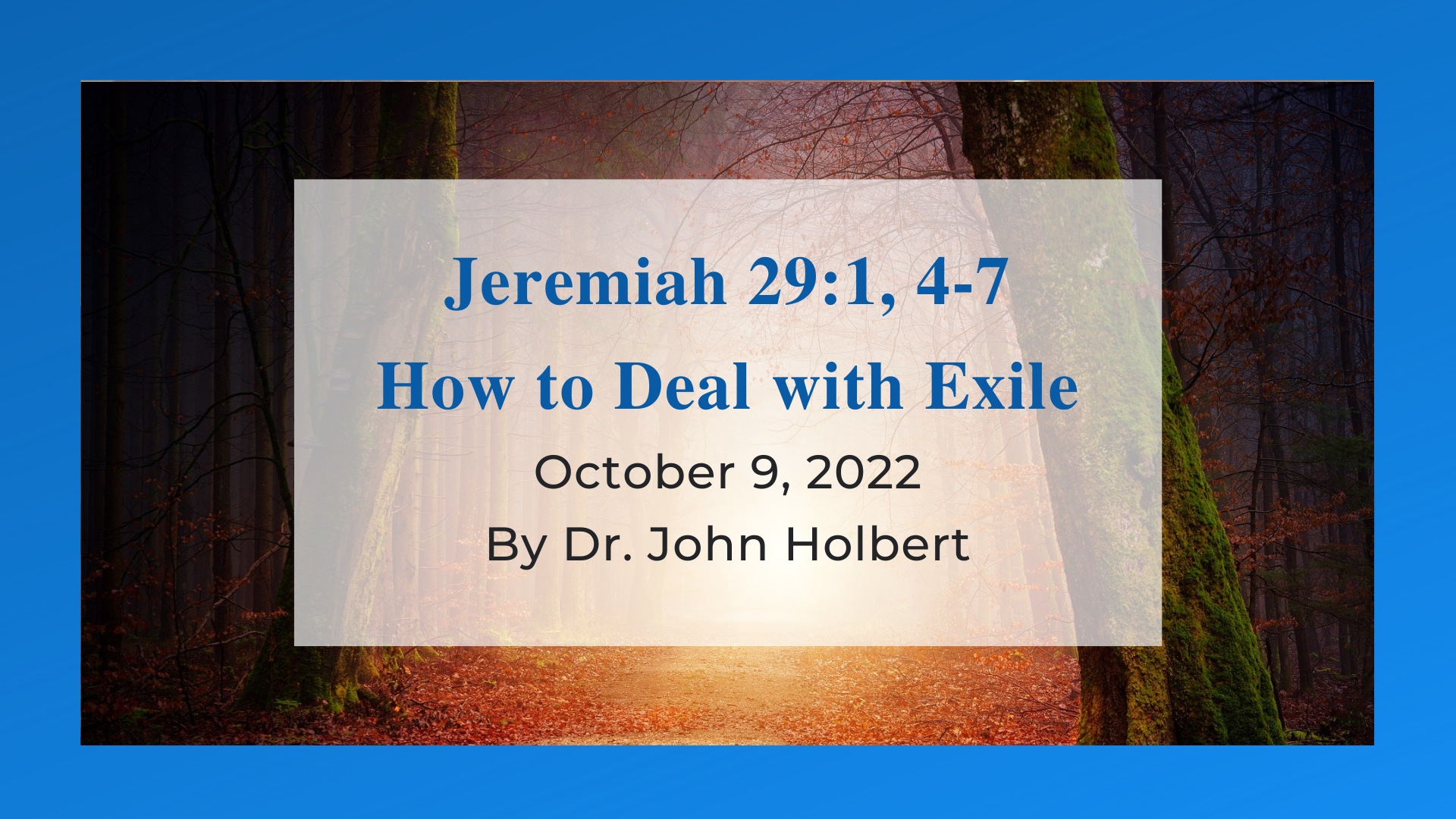 How to Deal with Exile

As you can readily see, when I said two weeks ago that we were through with Jeremiah for this year, I was quite wrong. In fact, three more passages from that great prophet will consume our attention today, next week, and the Reign of Christ Sunday on Nov.20. We have already seen just how much Jeremiah has to teach us, so certainly 9 full Sundays this fall are hardly too much to address from the long-lived and sharp-tongued man from Anathoth. Today, we get the wise Jeremiah, who shares with us his advice for those who have been led away captive into Babylon. It is advice that stands in sharp contrast to some other advice offered by other would-be prophets and “diviners” who apparently have gone off to exile with the Judean leaders in 587/586 BCE, making their way to the world’s greatest city, some 400 miles east of sacred Jerusalem.

Jeremiah has already demonstrated his view concerning exile that it will be a long one (Jer.28) in his confrontation with another prophet, Hananiah of Gibeon, who tells an assembled crowd that the coming exile will be brief; in fact “within two years,” he claims “YHWH will bring back all the vessels of YHWH’s house (the temple),” along with “Jeconiah, son of Jehoiakim (himself the son of Zedekiah) and all the exiles from Judah” (Jer.28:3-4). But Jeremiah does not agree with Hananiah’s ideas about exile. In fact, he says the exile will be long, not brief, and for his lies, Hananiah will find not peace but death. Chillingly, Jeremiah shouts that his fellow prophet will die, and “in that same year, in the seventh month, Hananiah died” (Jer.28:17).

But the exile is all too real. Jeremiah has witnessed the blinding of King Zedekiah, right after several of his children have been slaughtered so that the humbled king will always remember the terrible sight of his murdered children. And the king, along with the court and any number of community leaders, were herded out of the gate of Jerusalem, doomed to trudge their weary way to Babylon. The prophet, who has predicted this horrifying end of the nation for decades, now sees his words played out in monstrous detail. Still, he senses the need not to divest himself of his people, not to write them off. After all, from the very beginning of his prophetic ministry, he has identified with them and has wept with and for them (Jer.9:1), at the same time that he has attacked them for their penchant for evil-doing and for their continual rejection of YHWH’s will and way.

Now he must write to them a letter in their exile. What shall he say? Shall he rail against them, shouting “I told you so!”, in effect laughing at their misery? Shall he weep bitterly at their agony and pain, wishing he had never taken up this prophetic mantle, telling them to forget their past, to hang on to what they now have in Babylon? Shall he warn them about the many distractions of the great city—its mercantile possibilities, its powerful gods, its infinite opportunities for success, the dangers of forgetting YHWH? In effect, he does none of those things. What he does is rather surprising and in its own way quite direct and quite helpful.

He composes the letter and sends it by the way of Elasah, Shaphan’s son. You may remember that Shaphan was the scribe who upon the discovery of the scroll of the law in the rebuilding temple, was asked to read that scroll to King Josiah, a reading that lead to the large reformation of the community sometime after 622BCE. If this is the same Shaphan, then it is reasonable to imagine his son as a member of the court of Judah, and thus charged with communicating with the exiled Judeans. Jeremiah’s letter brooks no chit-chat but gets straight to the point. “Build houses and live in them; plant gardens and eat what they produce. Take wives and have sons and daughters; take wives for your sons, and give your daughters in marriage, that they may bear sons and daughters; multiply there and do not decrease” (Jer.29:5-6). Jeremiah makes it plain that the exile will last many generations, long enough for the first generation to marry, to have children, and for those children to have children, and in turn for those to have children; four generations at least.

Note, also, that there is nothing said about where these wives and husbands should come from. Must they be Judean, or does Jeremiah imply that even foreign spouses will do? The chief point is that the Judeans must not decrease; they must not disappear, must not meld into the great Babylonian maw. The prophet makes it clear that the exiles must “pray to YHWH for the welfare (the shalom) of the city,” for “in its shalom you will find your shalom” (Jer.29:7). Now comes the warning that apparently has triggered the letter. “Do not listen to your prophets among you, nor the soothsayers, nor pay any attention to your dreams that you are dreaming” (Jer.29:8). In other words, those so-called prophets who claim divine authority, not to mention the necromancers, the crystal-ball gazers, are all to be avoided completely. They have deceived you, says Jeremiah, by filling your heads with foolish and useless dreams of short exile, of Judean greatness, of the immediate collapse of Babylon. It is all a “lie,” says Jeremiah; though they prophecy in the name of YHWH, they have not been sent by YHWH (Jer.29:9).

The world has long been filled by those who take the easy route to success and fame, who say that simple beliefs lead to immediate wealth, grandeur, and adulation. Our televisions are filled with such hucksters. Pay no attention! God’s way is seldom the easy and short way. Rarely does the way of God lead to power and pleasure. God’s way is often narrow, harrowing, difficult, but ultimately fulfilling and good for the world. We pray for the place where we are, in order that its success may be ours as well. God calls from us patience and strength and does not will for our personal comfort and ease. Exile from our hopes and dreams is often the way of God, who guides us into places we would not choose on our own but places where God may best use us. The truth is that after some Judeans were able to return to Jerusalem after 50 years of exile, not all did return. Some stayed to found a thriving Jewish community, a community that lasted for over 1000 years, producing one of Judaism’s greatest documents, the Babylonian Talmud, a foundation for modern Judaism even today. Jeremiah was in the end proven right about exile; it can indeed become a crucible of greatness, a harbinger of marvelous things still to come.