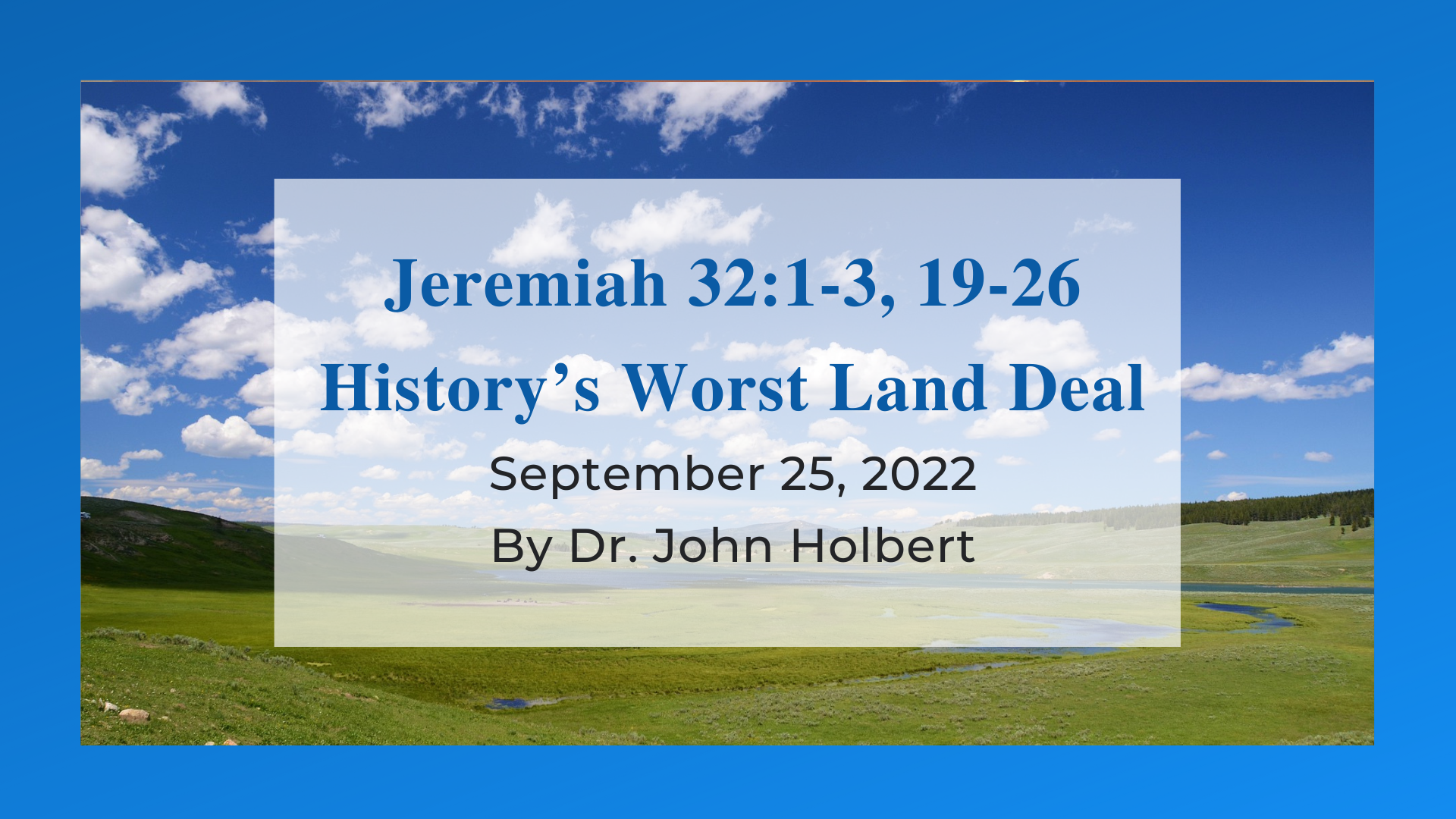 Our last look for this year at the prophet Jeremiah includes the astonishing, and at the same time ludicrous, a land deal that YHWH proposes to the prophet while he languishes in a Jerusalemite prison. Jeremiah is in jail, because Zedekiah, the last king of Judah, has confined him there due to his constant and deeply irritating oracles concerning that king’s terrible future, matched by Judah’s certain defeat at the hands of Nebuchadrezzar (the spelling one finds here of the king usually known as Nebuchadnezzar). Indeed, Jeremiah pronounces that not only will Jerusalem be captured by the Babylonian warlord, but Zedekiah himself will be carted off to Babylon and will remain there, “until I attend to him, says YHWH” (Jer.32:5). Little wonder that Jeremiah finds himself behind bars in a Judean dungeon!

While Zedekiah again, perhaps for the umpteenth time, upbraids his nettling prophet, Jeremiah has something completely different in mind. In short, he is pondering the advisability of the purchase of a piece of property, and in almost grotesque detail, proceeds to spin the possible land deal out to the no-doubt astonished and increasingly furious monarch. “You see,” says Jeremiah with studied calm, “YHWH’s word came to me in the person of my great-nephew, Hanamel, son of my uncle Shalum—perhaps you know him, my Lord—that man from Anathoth, my hometown?” No doubt Zedekiah knows nothing and cares less for anyone from Anathoth, and as he listens to Jeremiah his rage only increases with each useless detail of the story.

“I wonder, my Lord,” ponders Jeremiah, “whether or not I ought to buy the piece of land; it is a good piece, a long-time family piece, and would certainly make a nice addition to my family plot, don’t you think? And it is my right to purchase it.” One can only imagine a Zedekiah struck mute with fury as Jeremiah thinks about land buying! After all, this entire dialogue is being held in the light of Babylonian campfires, surrounding the sacred hills of Jerusalem, campfires kept burning by Babylonian warriors, their swords sharpened and their spears honed, ready to sack the city that has stood for nearly half a millennium on Mount Zion and has been the capital city both of Israel and Judah from the time of David and Solomon, now down to the end of the nation. Why in Sheol is Jeremiah jabbering on about land while the sacred city stands ready to fall to the heathen enemy?

Sure enough, young Hanamel, Jeremiah’s close relative from Anathoth, appears in the prison, and makes the land offer plain (Jer.32:8). And Jeremiah does exactly that. He purchases the piece of property, and pays fairly for it, “seventeen shekels of silver.” But that simple money exchange is hardly enough. “I signed the deed, sealed it, got witnesses (do you imagine he asked Zedekiah to be a witness? I would not put it past the grizzled prophet), and weighed the money on scales” (Jer.32:10). Everything in such a deal must be done correctly! But he is not finished yet. “I took the sealed deed of purchase, containing the terms and conditions, and the open copy (my, even a copy of the entire transaction!), and gave it to Baruch son of Neriah son of Mahseiah, in the presence of cousin Hanamel, in the presence of the witnesses who signed the deed of purchase, in the presence of all the Judeans (among whom, remember, is King Zedekiah!) who were sitting in the court of the guard” (Jer.32:11-12).

And finally, Jeremiah springs the meaning of this entire episode. You just knew that no self-respecting prophet would merely buy land for the sake of adding to his stash of property! After all, prophets simply do not see as you and I see. We, along with a fuming Zedekiah, see only an addled old man going through the ridiculous motions of buying land just as all the land is about to be swallowed up by the raging Babylonian hordes. But Jeremiah has far more in mind, and so should we. He charges Baruch, his faithful secretary, to take the sealed deed just signed and witnessed, “and put it in an earthenware jar, in order that they may last for a long time. For thus says YHWH of the armies, the God of Israel, ‘Houses and fields and vineyards shall again be purchased in this land" (Jer.32:14-15). And with that masterstroke, the prophet closes his oracle; the purchase of land becomes a promise of a future with God. In the face of imminent Babylonian destruction, the prophet proclaims that God is not through with the chosen people yet, despite what the present may look like, despite the reality of Judean doom.

And in a future that even Jeremiah could not have forseen, some 400 years after his land buying, later faithful Jews at a blasted and lonely place called Qumran, will place their sacred texts in earthenware jars to preserve them for a long time for future unknown followers. Over 2000 years after that, other faithful followers will find these texts that will serve them as signs that YHWH is indeed not through with the people yet. All this from a foolish deal for land. My, how God can work in mysterious and wonderful ways!