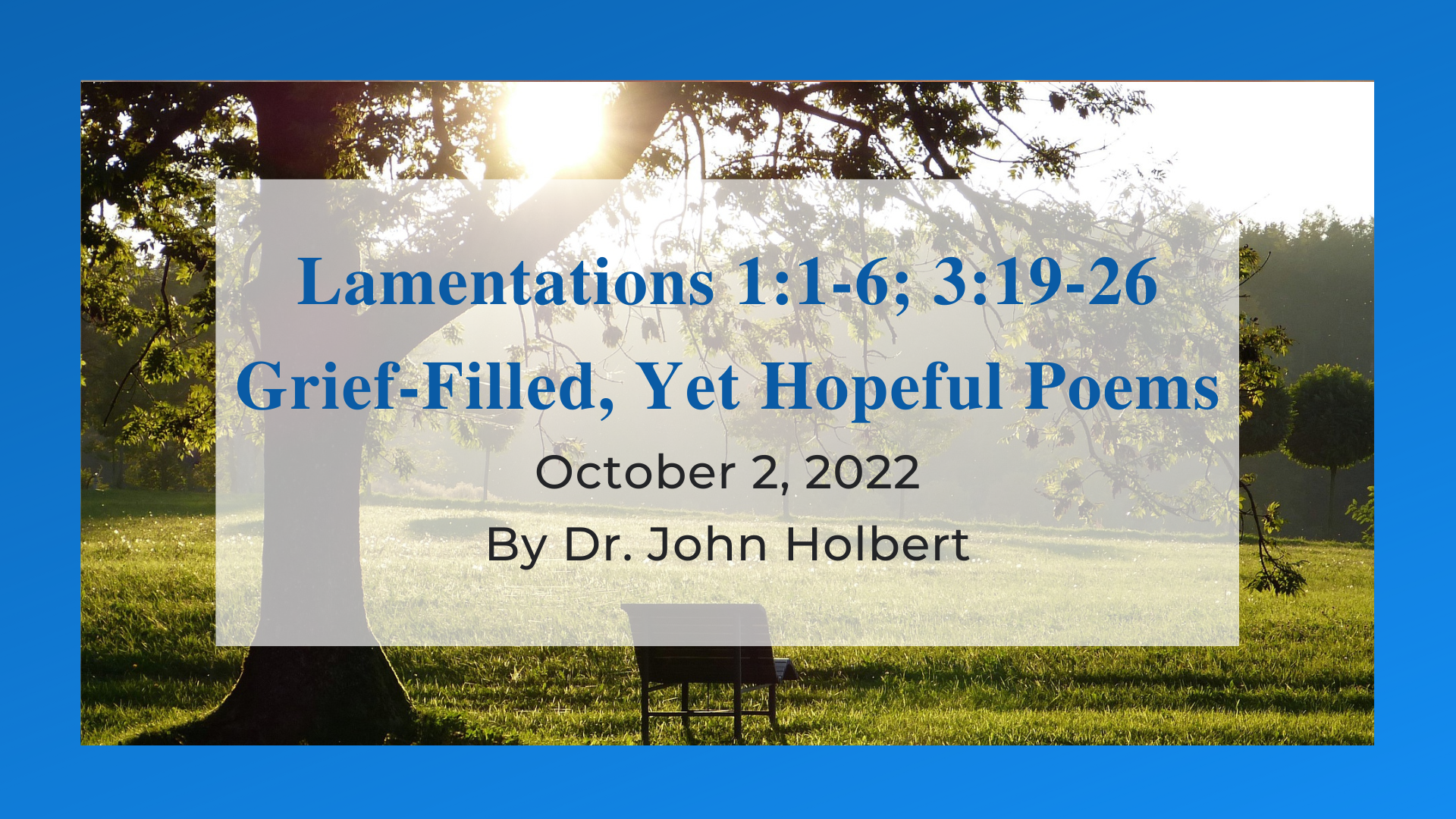 The Book of Lamentations has long been connected to the prophet Jeremiah; it regularly sits directly after the prophetic book in many English translations of the Bible—the NRSV is a prime example. It was thought by many to have been written by the prophet himself, perhaps after he had been dragged out of a ruined Jerusalem by his followers. This was done against the will of Jeremiah who apparently wanted to remain in the fallen city as a sign of his convictions that the future of the city was still a bright one when one remembered YHWH’s promises. In the light of last week’s text, Jeremiah 32, that amazing tale about Jeremiah’s land purchase in the midst of the city’s dying gasps, it seems likely that the prophet hoped to meet his end among the debris of the city he had both attacked and loved nearly his whole life. But it was not to be. Jeremiah, we assume, died in Egypt sometime after the destruction of Jerusalem and the exile of the city’s leaders to Babylon.

It is hardly surprising that the 5 separate poems that make up the Book of Lamentations were attributed to Jeremiah. Several of them sound very much like the sad grieving and deep longing of one who has given his life for the work of YHWH, only to see that work potentially disappear into the capacious maw of the Babylonian empire. Jeremiah may surely have been convinced that YHWH still had plans and hopes for the chosen people, but the realities of post-Jerusalem ravaging and ignominious exile made real hope hard to fathom. When Lam.1:1 reads “How lonely sits the city that once was full of people,” it is quite easy to imagine a despondent prophet, gazing into a blasted metropolis, eyes brimming with tears, and struggling to conjure up a future of any kind at all.

Still, we need to resist that romanticized portrait. Jeremiah certainly never saw Jerusalem again after his flight to Egypt, and we cannot know anything of the prophet’s moods, beyond the complex images that his very long prophetic career (nearly 50 years!) presented to us in the course of the book’s 52 chapters. The Book of Lamentations was written sometime after 587/586 BCE by someone reflecting on the end of the Holy City, someone who apparently knew of the city prior to its conquest and witnessed something of its tragic end. More than that, we probably cannot know. However, the words themselves reveal a sensitive soul, perhaps one given to flashes of hyperbole, memories of the city’s supposed greatness, much exaggerated by hindsight, now brought low. “She was a princess among provinces,” but has now “become a vassal” (Lam.1:1b). The city “weeps bitterly in the night with tears on her cheeks; among all her lovers, she finds no one to comfort her; all her friends have been treacherous and have become her enemies” (Lam.1:2).

This language suggests a writer conversant with both Jeremiah’s and Ezekiel’s ribald words concerning Judah and Jerusalem as wanton lovers, besieged by lusty suitors. But now, the author notes, those suitors have turned enemies, unconcerned about the weeping woman who is the ravaged city. “The roads to Zion mourn, for no one attends the festivals; all the gates are desolate, while her priests groan” (rather than worship and chant) (Lam.1:4). “YHWH has made her suffer for the myriad of her sins; her children have departed as captives before the foe” (Lam.1:5). The first poem of chapter 1 is tinged with sorrow and sadness; parts of it became fodder for the early church as it sought places in the Hebrew Bible to reflect on the misery and sorrows of the Man of Grief, Jesus of Nazareth (see Lam. 1:12 as a prime example).

But sorrow and sadness hardly exhaust the poetry of the author (s) of Lamentations. Though Lam.3 begins in the same sad mood (Lam.3:1-20), a turn toward hope is made in Lam.3:21: “But this I call to mind, and therefore have hope.” The Hebrew text reads Lam.3:22 “YHWH, we are not cut off,” while both Syriac and Targum translations read, “The steadfast love (chesed) of YHWH never stops.” That reading comports well with Lam.3:22b: “God’s mercies never come to an end.” And it goes on: “they (that love and those mercies) are new every morning; great is your faithfulness” (Lam.3:23). Of course, a very famous hymn, known to many as the African-American anthem, “Great is Thy Faithfulness,” finds its inspiration in these lines from Lamentations.

It is highly appropriate that a much-loved hymn for a community long burdened by injustice and weighed down by sorrow and sadness should find its generation from this particular book. Though we can never know who wrote these poems, they were obviously composed in the shadow of supreme destruction, forged in the fires of tragedy and despair; Lam.1 makes that context clear enough. But even that horror was not able to extinguish the hope that one may always find in God and God’s never-failing love and mercy. Indeed, “great is God’s faithfulness,” new every morning. What a grand and profound witness to faith in the face of tragedy, hope in the light of terror, a way where there appears to be no way. As those of us in White America continue our reckoning with our privileged lives in a racially imbalanced society, we would do well to listen carefully and long to those unforgettable hymnic strains: “great is thy faithfulness.” Even when the city collapses; even when hope appears gone; even when the future is dark, still, great is thy faithfulness. It is an anthem we all need in our day.