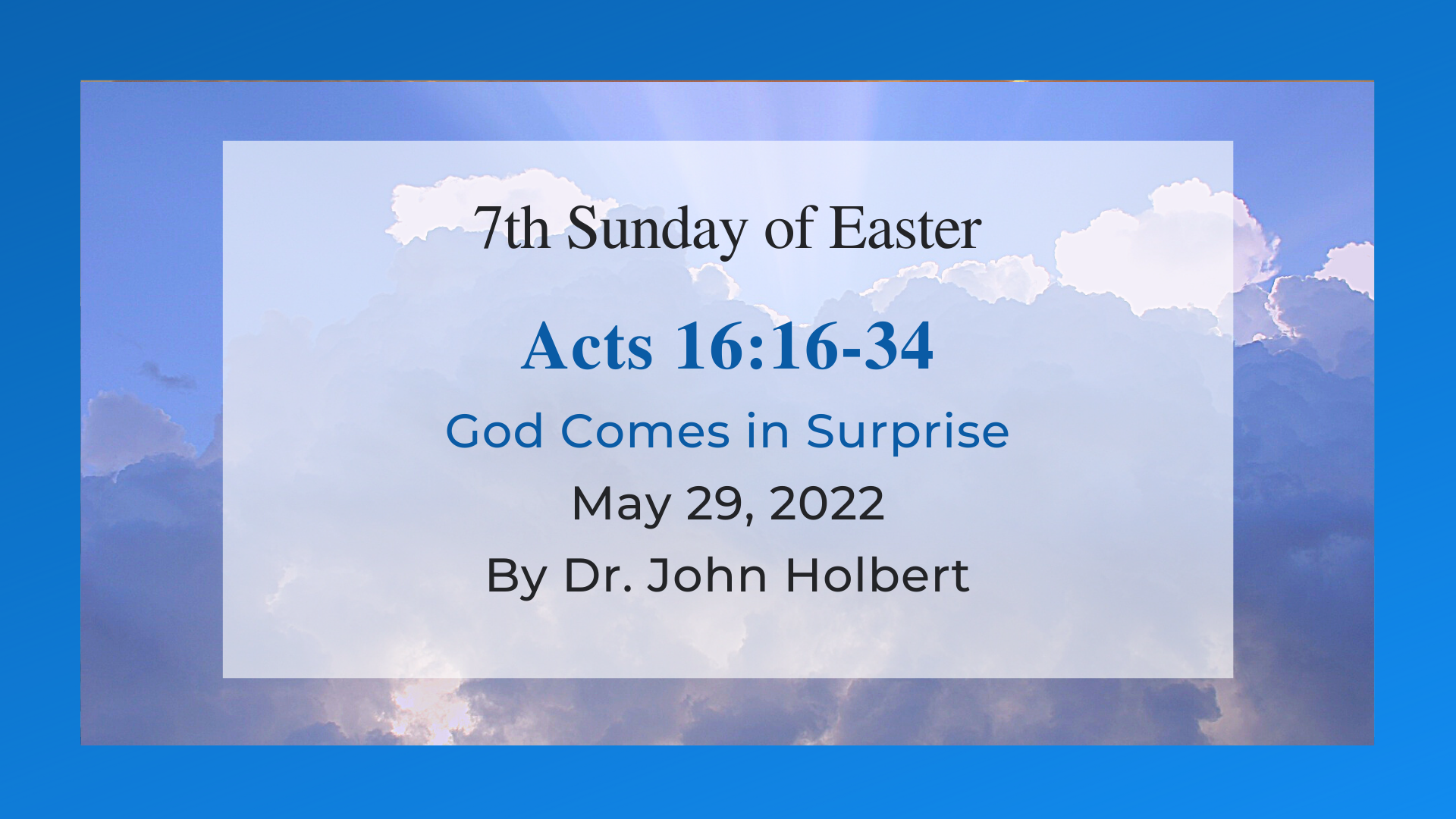 I have spent much of my life and ministry referencing and discussing the Bible. I love the Scripture, not because it is the infallible word of God in some sort of literal, fundamentalist way. Quite the contrary! I love it because it celebrates and represents over and again the astonishing surprises of God. In fact, when I have been asked to offer a kind of summary of the biblical record, my response has been that the work of God comes regularly in unexpected surprise. Among many other characteristics of the God we worship, the chief one is divine actions when we least expect them, actions that often amaze and astound, appearing as they do in common forms.

By surprise I do not only mean acts that are called miraculous, those floating ax heads of Elisha or Ezekiel’s peregrinations from Jerusalem to Babylon and back again, among many more that could be named. I mean rather those times when common events are imbued with divine power when human interactions are suddenly revealed to be much more than human. Such are the events narrated in this portion of the Book of the Acts.

Paul has been invited to Macedonia by an unnamed man to “help,” and in response, he has found his way there to begin his mission to Europe (Acts 16:9-10). While looking for a “place of prayer,” presumably a synagogue assembly, Paul’s common practice, he instead encounters a woman named Lydia, who is both apparently a widow (or at least unmarried), and rich because she is a dealer in purple dye and cloth, a certain sign of wealth. Thus, Paul has come to a place he has never been at the behest of a man he does not know, and while searching for a community of believers (in Judaism? in Jesus?) he meets “a worshipper of God,” Lydia, who approaches him to offer him support, including an offer of shelter in her own home (Acts 16:11-15). Each of these events could be seen as quite common, but each of them, according to the story of Luke, is riddled with divine import. Indeed, without these surprising encounters, the ministry of Paul in Philippi and further into Greece, and finally to Rome would have been quite impossible.

In Acts 16:16, Paul continues his search for a “place of prayer,” but again is sidetracked, but this time by a woman of a very different sort. She has “a spirit of divination,” and because of her gifts of prophecy, her handlers have been able to amass a good deal of money from her powers of prognostication. When she confronts Paul and his small entourage, however, she abandons her prophetic speech and instead utters what is patently true: “These people are servants of the highest God! They are announcing to you a way of salvation” (Acts 16:17)! Such talk is hardly designed to pad the coffers of her owners, nor is it welcomed by Paul himself. In fact, he grows very tired of the words from this woman, which Luke says she shouted: “for many days” (Acts 16:18). In fact, Paul is so weary of her announcements about him that he grew “very much annoyed,” and turned to demand that the demonic spirit “come out of her” in the name of Jesus. And so it does!

Well, Paul may have been comforted by the fresh silence of the Pythian woman, but her owners were hardly pleased at all. Without her possession by the spirit, she is of no further use to them. As a result, they drag Paul and Silas to the “marketplace before the authorities,” and accuse them in two ways: “These men are disturbing our city; they are Jews and are advocating customs that are not lawful for us as Romans to adopt or observe” (Acts 16:20-21). The furious owners of the woman begin their accusations with a familiar anti-Semitic trope: Jews both “advocate customs” that are unlawful for any good Roman to accept, and as a result of those customs they “disturb our (not “their") city. They must be punished, and without any comment the magistrates have Paul and Silas stripped naked, beaten, and imprisoned in stocks in the “innermost cells” of the local prison (Acts 16:22-24).

But, while Paul and Silas are praying in the prison, a massive earthquake strikes the city—a not uncommon event since Philippi lies right on the same Jordan Rift fault line that plagues modern Turkey with huge earthquakes—and the chains and fetters of all the prisoners are struck off. In horror, the chief prison guard, upon seeing the open doors of all the cells, and assuming that all his prisoners will surely have escaped, grabs his sword to commit bloody suicide; he has failed miserably in his responsibilities and will certainly be punished severely.

But Paul shouts at him to stop his self-harm. The prisoners have all remained in their cells; the guard has no need to face any sort of punishment. In extreme gratitude, he asks them, “Sirs, what must I do to be saved” (Acts 16:30)? Paul counsels belief in the Lord Jesus and the baptism of him and his entire household. The act is performed “without delay.” The very next morning, the same magistrates who assigned extreme punishment for Paul and his followers now command that they all be freed. Surprisingly, Paul is having nothing to do with that! He will not allow these authorities publically to demand punishment and then try to command freedom in private (Acts 16:37). Paul announces that he, too, is a Roman citizen, and as such should never have been treated with such un-Roman behavior in secret and without proper trial. The magistrates themselves come to the prison to free Paul and offer abject apologies out of fear of their harsh and shameful treatment of these men, who are as much Roman as they are.

Whether or not Paul was in fact a citizen of Rome can never be finally proven, but for the sake of Luke’s tale, he is a citizen, and that fact bears mightily on his work and ongoing life. For Luke, it is the surprising God whose actions weave their way throughout the narrative, who is the ultimate focus of the work of Peter, Paul, and the other early missionaries who spread the word of Jesus throughout the Mediterranean basin. And we in the 21st century are heirs of this same surprising God whose work is often to be found in unexpected places in our own time if only we can take the time to look for it.