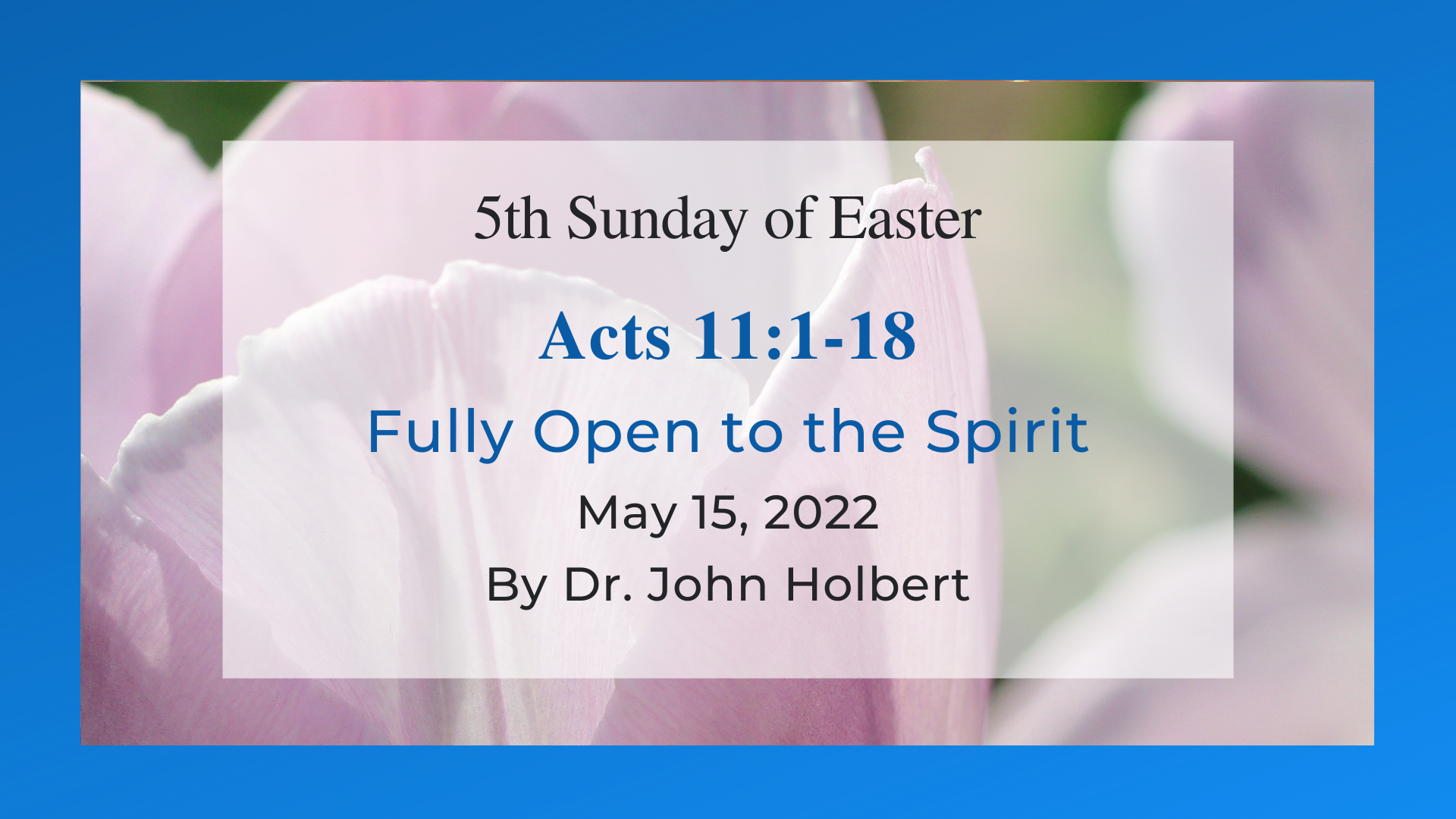 Fully Open to the Spirit

Today’s text thrusts us directly into the enormously consequential narrative of Peter’s confrontation with the Holy Spirit that forces him to rethink everything he has learned and practiced as a first-century Jew. Most decisively, Peter will, at the direct instigation of the Holy Spirit of God, transgress kosher food laws, reject the exclusion of Gentiles from table fellowship, and spurn the central idea that traditional Judaism is completely unique as the only way to approach and follow the will and way of God. Long before the final confrontation with the “circumcision party” at the Jerusalem council in Acts 15, Peter will be convinced that he needs to become a different sort of Jew if he is to be able to include Gentiles, not only at the table but also as subjects for God’s offered salvation in Jesus.

The tale Luke recounts is little less than astonishing. In chapter 10, Peter goes to the house of the Gentile centurion, Cornelius, and witnesses the fall of the Holy Spirit on this Gentile and those who were with him in the house, as a result of Peter’s impassioned sermon (Acts 10:44). Also, “believers from the circumcision,” that is faithfully traditional Jews, who have accompanied Peter to the house, become witnesses to this amazing reality of inclusion of Gentiles in the work of the Spirit (Acts 10:45), including “speaking in tongues and praising God,” actions that soon lead to their baptism (Acts 10:47-48). Acts 11 reinforces that fact of Gentile inclusion, though this part of the narrative is a good deal more than mere repetition.

Here, Peter himself is told in a startling vision that he is not to exclude any creature, all created by God, from his diet, thus shattering the important Jewish practice of kosher (Acts 11:5-10). And since the vision of the sheet filled with all sorts of “unclean” animals is repeated three times (!), Peter is convinced of its origin in God. Immediately after the appearance of the vision, Peter is summoned to Caesarea, the seat of the Roman governor of Judea, and a place filled with all sorts of Gentile people, even those who are the public enemies of all Jews. Yet, as in the house of Cornelius, Peter begins to preach, but something amazing happens right away. “As I was starting to speak,” the Spirit fell on them in exactly the same way it had first fallen on Peter and his followers at the very beginning of his mission (Acts 11:15). At that very moment, Peter remembered the words of Jesus that referred to the “baptism of the Holy Spirit” (Luke 3:16). Peter now saw those words fulfilled in his presence.

But Peter sees even more than the simple fact of the Spirit’s work. He now discerns that “God has given repentance to life even to the Gentiles” (Acts 11:18). That phrase could also be translated “conversion that leads to life.” Not only may Peter eat what God has created; not only may he have table fellowship with Gentiles; not only can and does the Holy Spirit fall on Gentiles as well as believing Jews; Gentiles, like Peter and his early followers, can be the recipients of the full salvation of God!

This wonderful story of the inclusion of the Gentiles in the full plan of God is a cautionary tale for any of us who would exclude anyone from the realm of that God. Those who use fallacious arguments, supposedly from the Scriptures, to turn women, or the differently-abled, or LGBTQ+, or foreigners, or other religious followers, into second-class people have simply failed to hear the rich implications of these stories from the early church. In God’s church there can be “no partiality,” or put even more bluntly by Peter, “Was I powerful enough to prevent God?” Exclusion in the church is not only a sin against the Holy Spirit, it is nothing less than a claim to be God. If Peter saw that he was not “powerful enough to prevent God” from including all in the realm of God, then no human being, no matter how powerful, or seemingly persuasive, may have the gall to exclude any from God’s full presence. Quite simply, in the church of God, all are welcome, and that all means all.