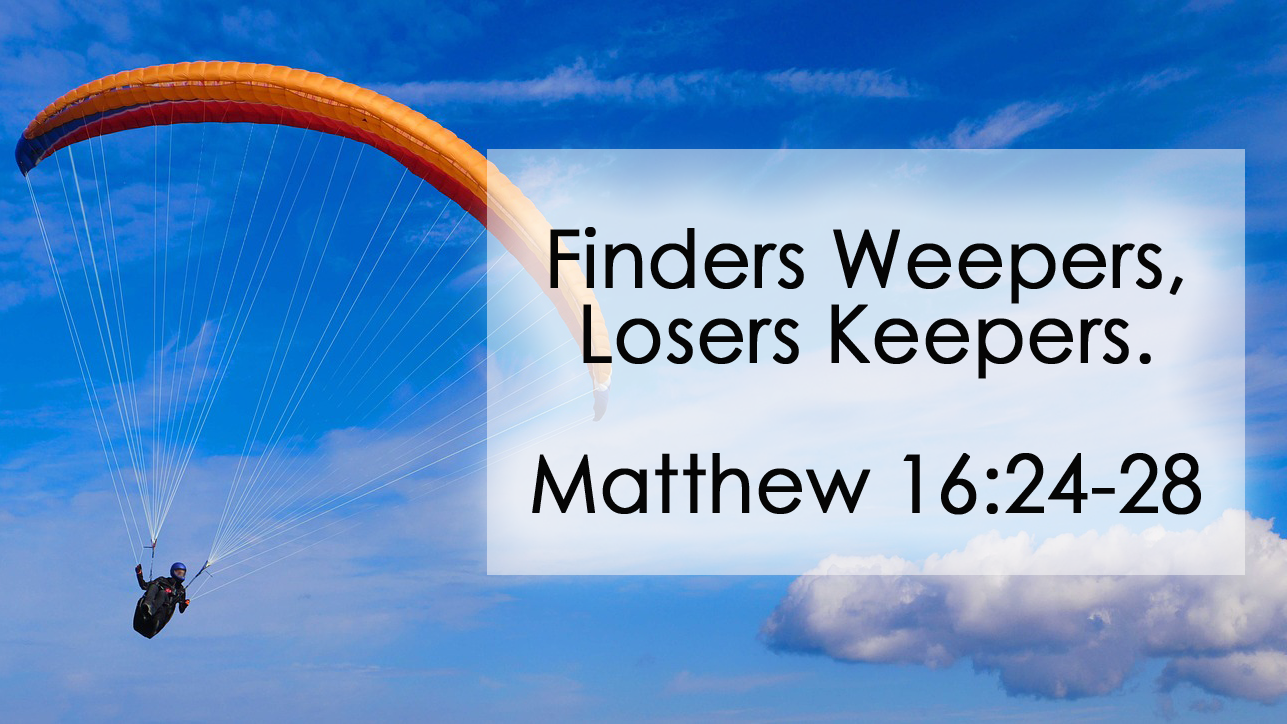 “If any want to become my followers, let them deny themselves and take up their cross and follow me. For those who want to save their life will lose it, and those who lose their life for my sake will find it. For what will it profit them if they gain the whole world but forfeit their life? Or what will they give in return for their life?”

This paradoxical proverb of Jesus could be summarized as the opposite of the common saying, “Finders keepers, losers weepers.” It’s more like “Finders weepers, losers keepers.” Frankly, that level of paradox hurts my brain. It reminds me of Jack Nicholson’s classic comment to Tom Cruise in the movie A Few Good Men, “The truth!? You can’t handle the truth!”

Well, I can’t handle this whole saying at one time either. I need to break it in half like one of those huge pills with a line down the middle.

Let’s take the first half first. “Finders Weepers.”  “Whoever would save his life will lose it.”  A. E. Houseman, a non-Christian poet, (1859-1936) called this first half of Jesus’ saying “the most important truth about life ever uttered.”

Whoever would save his life… There’s a whole lotta life in this passage!

Life in this passage shows up 4 times in 2 verses. The Greek word for life is psyche, the lifeforce at the core of our being. The Hebrew word is nephesh.  In Genesis 2:7 “The Lord God formed the human from the dust of the ground and breathed into his nostrils the breath of life and he became a living being (nephesh).” We are all formed in the image of God, but we are each a unique expression of that image. “Whoever would save his life will lose it…”

A friend of mine was on his way to an airfield to go skydiving with his son, an air force pilot. “Dad, you seem nervous,” said his son.

“I am. What if my parachute doesn’t open when I pull the ripcord?”

I think of the first part of this saying (“Finders Weepers”) as the free fall of a parachute jump. “Whoever save his life will lose it.” If that’s my life motto, I’m going down. Oh, I think Jesus still wants us to eat our fiber and plan for our retirement.  But not to view our nephesh, our life, our psyche as our personal possession we can do with as we like. Do not direct its energy solely toward building an existence that is secure, orderly and comfortable for us and for ours, and to hell with everyone else. Jesus is speaking from personal experience of temptation by Satan to use his nephesh for wealth and power. “Finders Weepers.”  The late Peter Gomes, ethics professor and minister at Harvard Divinity School, used to warn ambitious 20 somethings to nurture relationships on the way to the corner office. “Otherwise,” he tells them, “Someday you’ll finally get there, only to discover there is no one there!”

“Finders Weepers.” Irish poet and playwright Oscar Wilde (1854-1900) once remarked “When the gods wish to punish us, they simply answer our prayers.” That’s why the wise teachers of the Book of Proverbs said, “Trust in the Lord with your whole heart, and do not rely on your own insight” (Proverbs 3:5). That’s why they remarked that “Sometimes there is a way that seems to be right but its end is the way to death (16:25; see also Proverbs 14:12). The secular version of that biblical verse is “It seemed like a good idea at the time…” Matthew 16:27-28 text says that someday “the Son of Man will come with his angels in the glory of his Father, and then he will repay everyone for what has been done.”  When that day comes I hope to be able to give a better account of my life than, “It seemed like a good idea at the time.”

It’s time for the second half of this paradoxical saying: “Those who lose their life for my sake will find it.” I view this second half of the saying as the ripcord that opens my parachute, that saves me from a free fall to spiritual death.

Did Jesus mean I am to be someone’s doormat, martyr, or victim?

No, but I should regard my life as a gift from God in whose image I am created. I should take up the inconvenience, risk and sacrifice following his Son requires.

What would it look like to let Jesus’ proverb loose in my life? Here is what it looked like for Dutch born Catholic priest, professor and writer Henry Nouwen. He struggled his whole life with clinical depression and out of it wrote 40 books that have become spiritual classics. After years as a professor of pastoral theology at various prestigious schools in the US and Europe, Father Nouwen in 1986 went to Toronto, Canada to a community of developmentally disabled people and their caregivers called Daybreak. He was to serve as their priest. In his book In the Name of Jesus: Reflections on Christian Leadership Nouwen says this: The first thing that struck me… was that their liking or disliking me had absolutely nothing to do with my accomplishments.  Nobody could read my books, so they couldn’t impress anyone. Most of them never went to school so my educational credentials didn’t impress them. My considerable experience working with different denominations and explaining their differences and similarities was not particularly called for. When, one evening, I passed the platter of roast beef down the table to one of the assistants, one of the residents said loudly, “Don’t give him meat, Henry. He doesn’t eat meat. He is a Presbyterian!” I was suddenly faced with my naked self, affirmed, rejected, hugged, punched, smiled at all dependent simply on how I was perceived at the moment. It seemed as though I was starting my life all over again. This experience forced me to rediscover my true identity. These … completely unpretentious people forced me to let go of the self I took pride in that could do things and build things and prove things. It forced me to reclaim that unadorned self in which I am completely vulnerable, open to receive and give love regardless of any accomplishments (In the Name of Jesus, 15-16).

Of the many, many things I miss about my mother who died a few months ago, one is the steady stream of cartoons she would clip and mail to me. My favorite showed a line of people at heaven’s gate and a tall, white bearded, St. Peter standing there. At the head of the line was a man with a worried look on his face wearing a t- shirt that said- (cleaned up version) – “Stuff Happens.” He had his hand up and he was saying “Please, sir, can I go home first and change my shirt?”

Today Jesus offers you and me a prickly, pithy, paradoxical proverb as our motto, our mantra, our modus operandi.

“Those who want to save their life will lose it, and those who lose their life for my sake will find it.”