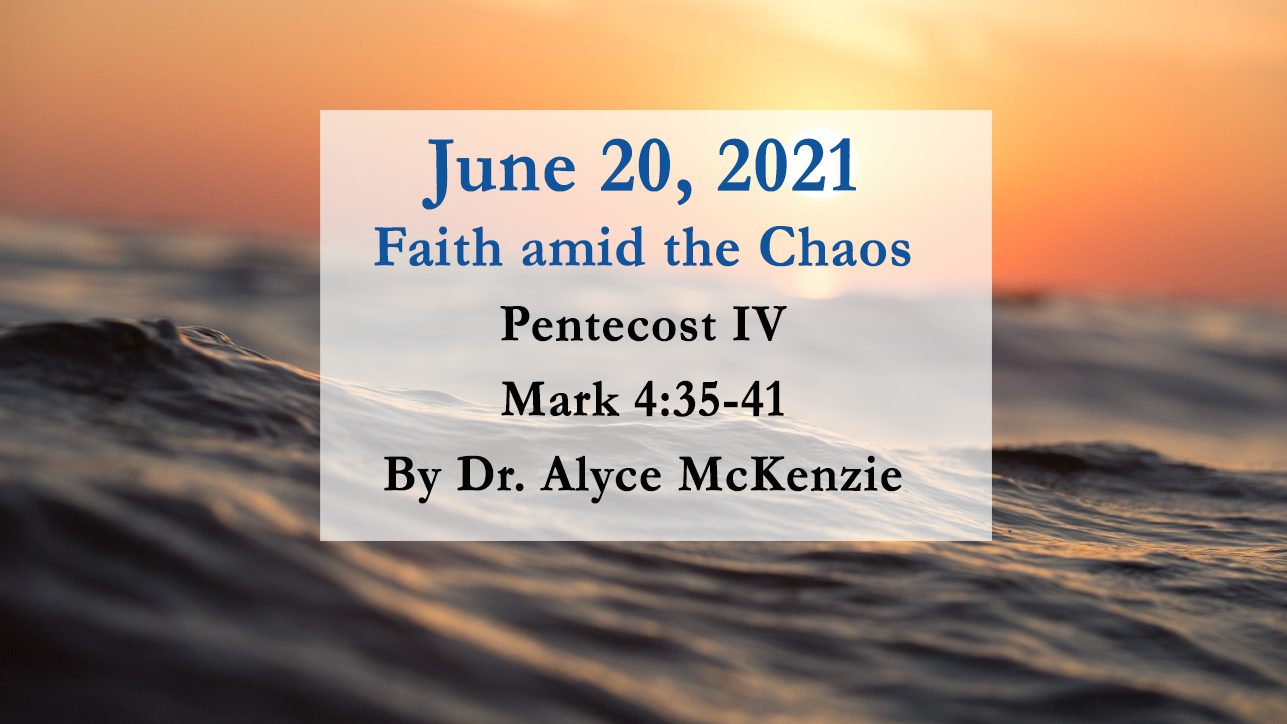 Faith amid the Chaos

Presbyterian pastor Gary Charles, in his commentary on this passage in Preaching Mark in Two Voices, points out that there are three characters in this story of the calming of the sea that bring chapter 4 of Mark to a close. There are the disciples. There is Jesus. And there is the sea. Characters have personalities and they have a part to play in the plot of a story. The sea has quite a strong personality in Mark and it certainly has a part to play!

Jesus delivered the seed parables (Mark 4:1-34) from a boat on the sea to crowds seated on dry land. They are meant to assure us that God works to bring the kingdom about in small ways, even in threatening circumstances. The sea, for Mark, connotes the power of those threatening circumstances, of chaos, which the Bible connects with the demonic. Chapter 4 of Mark begins and ends with a reference to the sea: "Again he began to teach beside the sea" (4:1); "Who then is this, that even the wind and the sea obey him?" (4:41).

People who think of the sea as a scenic view from the boardwalk as they slurp their snow cones don't understand where Mark is coming from in characterizing the sea. People who have been through a hurricane or a tsunami, however, get it. People who make their living by going to sea, then and now, resonate with Mark's depiction of the sea as unpredictable and dangerous. Throughout the Bible, the sea is a metaphor for the place where chaos and the demonic reside. (Blount and Charles, 68) Moses leads the people from bondage to liberation through a sea. The sea threatens those who would follow God (Ps. 69:1, 14-15). God's power to calm the sea is affirmed (Ps. 46:1-3; 89:8-9; 93:3-4; Rev. 21:1). "For Mark, the sea (thalassa) is a metaphor for the demonic and apocalyptic chaos that confronts Jesus, terrorizes his disciples and threatens the future of the gospel." (Blount and Charles, 60)

Each of us is trying to live by the seed parables' message in the midst of a chaotic life. Not only for our own sakes but for those on whose lives we hope to be a positive influence, whether children, friends, or family. Each of us is surrounded by chaos, realizing that our attempts to order our lives, while legitimate, are precarious. Flash floods, mass shooters, racially motivated violence, road rage. These are aspects of life not under our control. We cannot control the behavior of others. We cannot even control our own behaviors at times, feeling like Paul in Romans 7:14-25, "knowing what we ought to do and doing the opposite."

All we need is faith the size of a grain of mustard seed to withstand the storm. That's about how much the disciples in Matthew's version of this story have. They have a little bit of faith, and it grows throughout the gospel. In Matthew (8: 26) Jesus says to the disciples: "Why are you afraid, little faith ones?" (8:26). "You of little faith" is not an insult. It's more a sort of pet name for the disciples Jesus uses throughout the gospel. (See also Matthew 6:30; 14:31.)

We've described the sea as the third character in this story. Its role is to threaten the disciples and to test their faith. The demonic forces that reside in the sea's underbelly stir the waters and wind into a lailaps (whirlwind or sea squall), and as the sea turns violent the disciples' faith is tested. “Jesus does not criticize the disciples for fearing a storm. He faults them for thinking the demonic forces of the seas were more powerful than he." (Blount and Charles, 66) While the demonic sea pays attention to Jesus, the disciples still do not understand (4:41). “Who is this that the wind and sea obey him?”

On October 17, 1735, John Wesley and his brother Charles set sail from England to Savannah, Georgia. John's goal was to preach to the Indians and lead them to Christ. On the four-month-long trip, a storm came up suddenly and broke the mainmast. While the Englishmen were crying, a group of Moravians calmly sang hymns and prayed. John Wesley was impressed by their personal faith in the face of a dangerous, life-threatening storm.

He became convinced of his inner weakness while the Moravians seemed to possess an inner strength he did not. He later wrote in his journal, "It was then that I realized that mine was a dry land, fair-weather faith."

This story from Mark offers us a better way. At the heart of it, the message lies in our supplying the answer to the disciples' question: "Who then is this, that even the wind and the sea obey him?"